The 10 Most Beautiful Libraries in Paris

Paris’ libraries are more than just vast and varied collections of books—they’re troves of history, expositions, and art. If you’re a student or a freelancer in Paris, libraries offer an ideal place to spend a productive afternoon away from the noisiness of cafés. Many older ones are closed to the public, many of these offer guided tours, which are almost always free. 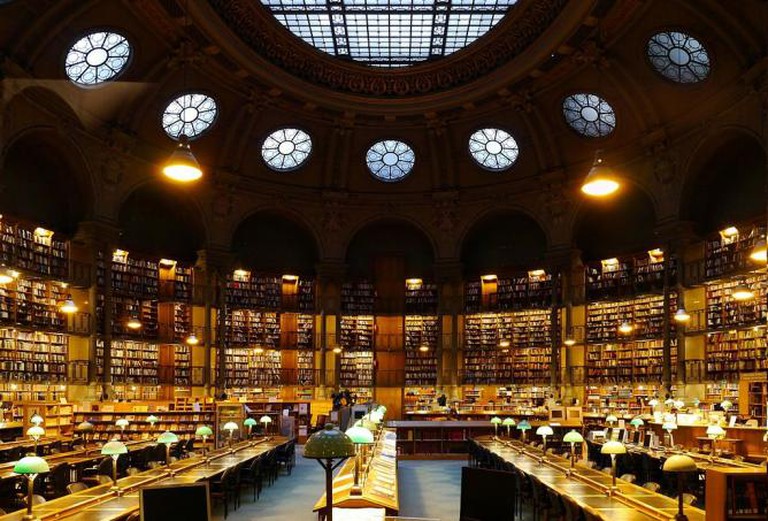 Bibliothèque Richelieu-Louvois | © Poulpy/WikiCommons
With a grandiose façade and luminous reading room, it’s hard to believe that the Bibliotheque Mazarine is often overlooked by tourists making their way across the Seine and into the St-Germain-des-Prés. The oldest public library in France, it has a modern collection focusing on French history from the 12th–17th centuries, as well as thousands of rare, medieval manuscripts. The most treasured text found here is a Gutenberg Bible known as the Bible Mazarin, which dates back to 1250, and is kept in a secret vault.
Open In Google Maps
23 Quai de Conti, Paris, Île-de-France, 75006, France
+33144414406
Visit Website
Give us feedback 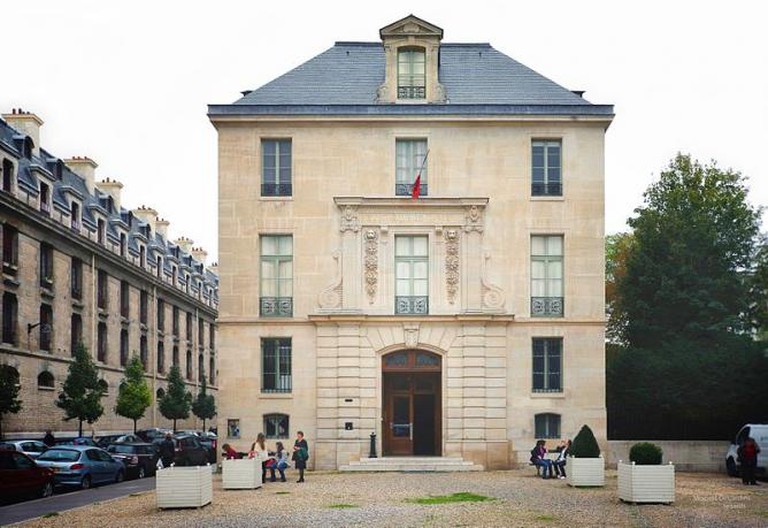 Bibliothèque de l'Arsenal | © Vincent Desjardins/WikiCommons
Nestled between the Palais Royal and the Galeries Vivienne in the very center of Paris is the Bibliotheque Richelieu-Louvois, one of four branches of the Bibliotheque National de France (originally founded in 1368 under Charles V). It was designed by Henri Labrouste during the second half of the 19th century, who also designed the Bibliothèque Sainte-Geneviève, on the opposite side of the city. The site houses some of humanity’s earliest writings, a collection of ancient Greek and Roman pottery, and an immense and kaleidoscopic Oval Room. The garden across the street is also lovely for a picnic or time alone with a good novel.
Open In Google Maps
58 Rue de Richelieu, Paris, Île-de-France, 75002, France
+33153795379
Visit Website
Give us feedback 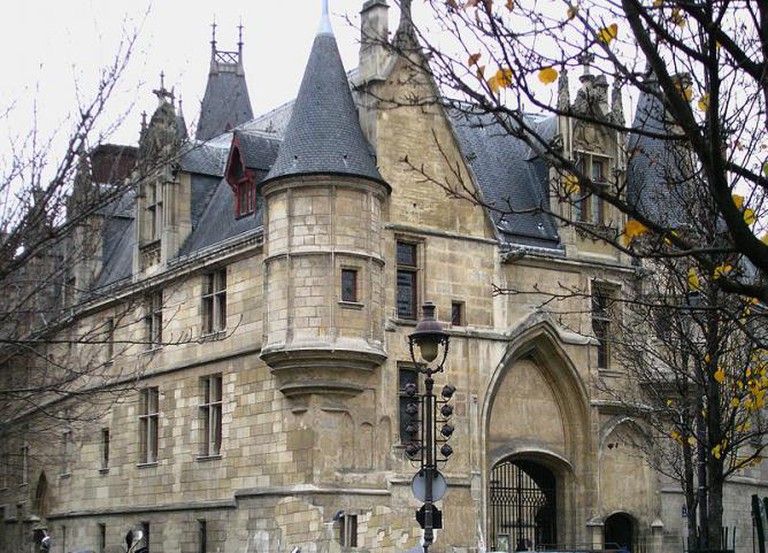 Bibliothèque Forney | © Julie Kertesz/WikimediaCommons
The Bibliothèque de l’Arsenal, located steps from the Bastille and the Seine, is another branch of the Bibliothèque National de France. It’s one of the smaller libraries of Paris but still boasts plenty of historic charm. The façade dates back to the 17th century and used to be connected to the nearby building now housing the Gard Republican, and wasn’t turned into a public library until the French Revolution. Reading rooms and bookstores were constructed in the 19th century and restored as recently as 2012. The library is certainly worth a peek to see its magnificent Salon de Musique and room of illustrations.
Open In Google Maps
1 Rue de Sully, Paris, Île-de-France, 75004, France
+33153793904
Visit Website
Give us feedback

Library
Facebook
Email
Twitter
Pinterest
Copy link
Share
Map View
If you visit the Bibliothèque de l’Arsenal or the Bibliothèque Historique, you’re only minutes away from the Bibliothèque Forney, which specializes in decorative arts. Located on a quiet corner behind Pont Marie, the former Hotel de Sens dates back to the 15th century and is one of three remaining medieval private residences in Paris. Even if a tour doesn’t fit in your schedule, stop by to admire the courtyard and beautifully restored spires and archways.
Open In Google Maps
1 Rue du Figuier, Paris, Île-de-France, 75004, France
+33142781460
Visit Website
Give us feedback 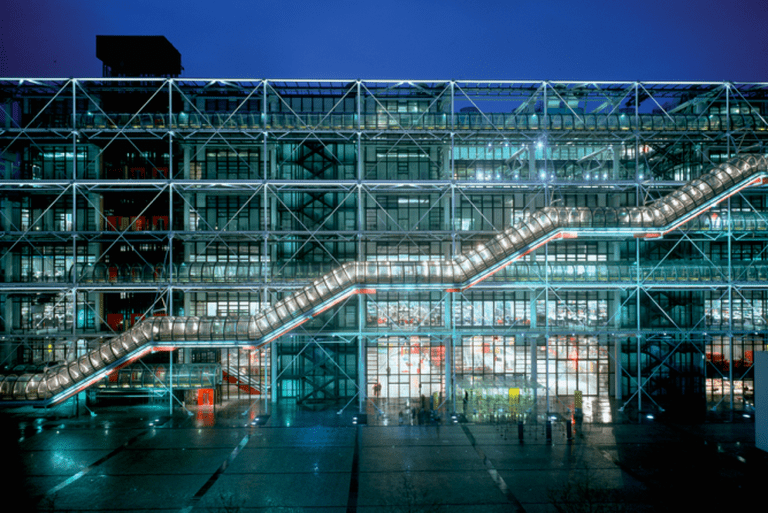 Centre Pompidou | Courtesy of Bibliothèque Publique d'Information
Since its controversial opening in 1977, the modern art museum, Centre Georges Pompidou, has attracted over 180 million international visitors. However, only locals are familiar with the four-story media library, the Bibliothèque Publique d’Information, located on the rue Beaubourg side of the iconic building. The modern library offers free Wi-Fi, a great view over place Beaubourg, and is open to the public. If you come to get work done, be sure to arrive promptly when it opens, as desks fill up quickly.
Open In Google Maps
19 Rue Beaubourg, Paris, Île-de-France, 75004, France
+33144781275
Visit Website
Visit Facebook page
Give us feedback 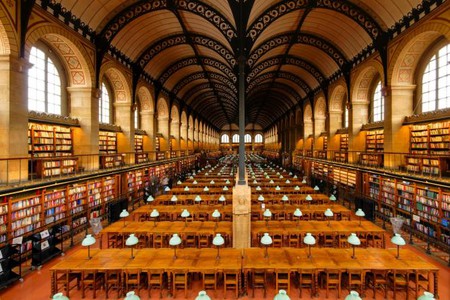 The Bibliothèque Sainte Geneviève is easily one of the most visually stunning buildings in Paris. The original abbey of St. Geneviève was founded in the 6th century. The iron building that stands today across from the Panthéon was built between 1838 and 1850 by Henri Labrouste, architect of the equally regal, if smaller, Bibliothèque Richelieu. The facade is engraved with the names of great minds who made contributions to the body of human knowledge, including Galileo, Copernicus, and Shakespeare. On a given weekday afternoon, you’ll likely find students and young professionals lining up down the street, beneath the names of 810 celebrated scholars engraved on the wall, waiting to get a seat in the immense reading room. 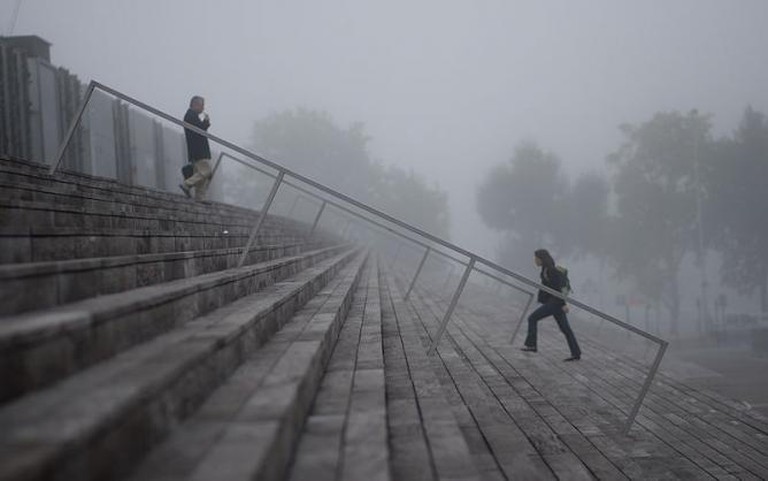 Steps up to the Bibliothèque François Mitterand | © Bruno Jargot/WikiCommons
While you’re in the 13th arrondissement, stroll toward the Seine to one of the largest libraries in Paris, built in 1966. This faction of the Bibliotheque National de France is comprised of four, seven-story towers and a garden. Conveniently located near several of Paris’ top universities, the collection offers students resources relating to science, art, technology, literature, language, and economics, and other subjects. Cross the Simone de Beauvoir Bridge to the lush, Bercy gardens, where students are likely taking a nap or reading in between classes.
Open In Google Maps
Quai François Mauriac, Paris, Île-de-France, 75706, France
+33153795959
Visit Website
Give us feedback 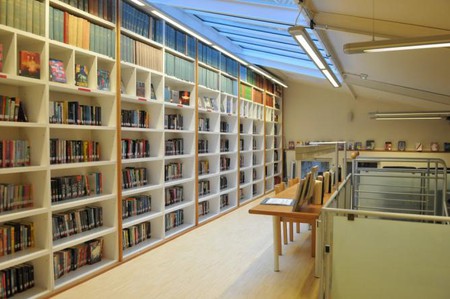 © Krystal Kenney, Courtesy of The American Library In Paris

The American Library in Paris

Located in the quiet 7th arrondissement, and with a view of the Eiffel Tower, the American Library Association founded the American Library in 1920, partially in order to house the many books that were donated oversees to American soldiers fighting in World War I. The association sought to bring the best of American literature and library science to France. The library lived through two wars and several different moves around the city. Gertrude Stein was a library subscriber in her day. Ernest Hemingway was a contributer to the library’s literary journal, Ex Libris. Today, the library draws expats and international students alike with its readings by prominent authors and poets, children’s programs, classes, and community events. 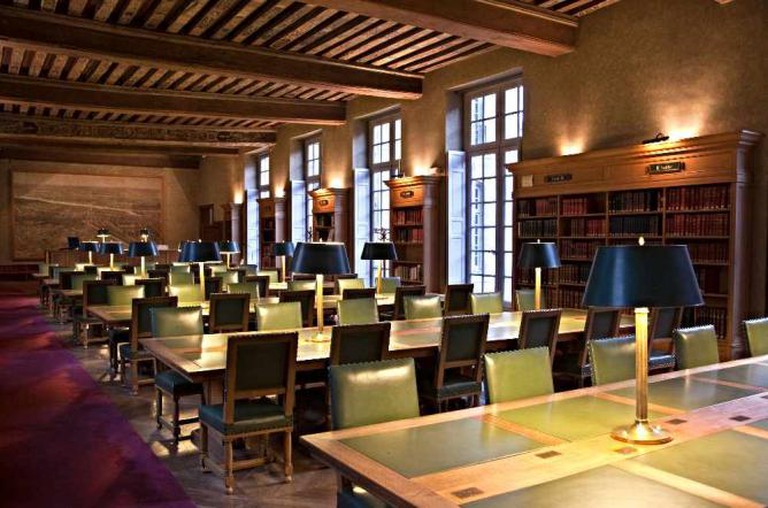 Bibliothèque Historique De La Ville De Paris | © BHVP/WikimediaCommmons
The BHVP, like its museum neighbor across the street the Musée Carnavalet, specializes in the history of the city of Paris. Originally housed in the Hotel de Ville until 1871, the library brings together documents dating from the 16th century to the present on Paris’ history and is open to the public. Like the Bibliothèque de l’Arsenal, it’s one of the smaller libraries but a noteworthy (and free!) stop on a walking tour of the Marais.
Open In Google Maps
24 Rue Pavée, Paris, Île-de-France, 75004, France
+33144592940
Visit Website
Give us feedback 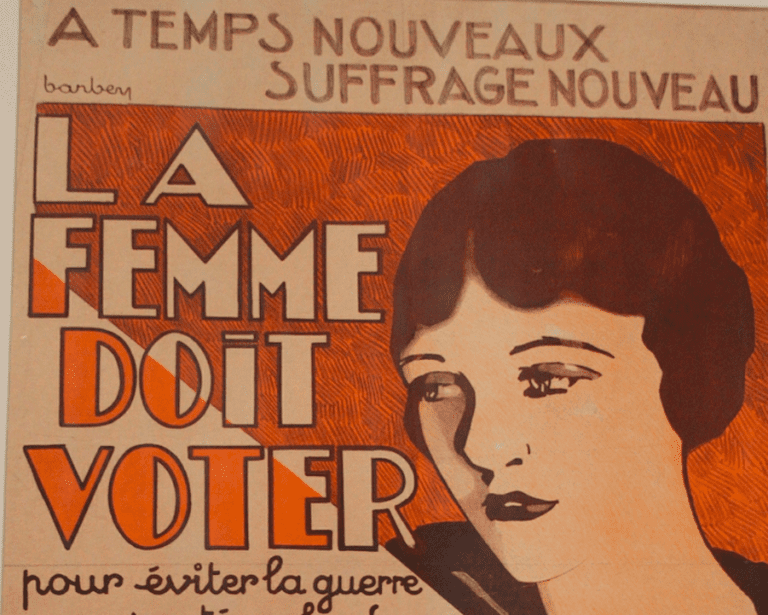 Suffrage for Women, at the Bibliothèque Marguerite Durand | © Jeanne Menj/Flickr
Founded in 1932 by the eponymous journalist, actress, and suffragette, this library in the off-the-beaten-tourist-path 13th arrondissement contains a vast collection of historical items (brochures, letters, photographs, periodicals, various art pieces) and texts relating to feminism and women’s history. It may not be the most architecturally impressive library in Paris, but its contents are a must-see for any aspiring writer, journalist, or culturally literate traveler.
Open In Google Maps
Rue Nationale, 79, Paris, Île-de-France, 75013, France
+33153827677
Visit Website
Give us feedback
Give us feedback