The 10 Best Pâtisseries In Paris For Millefeuilles 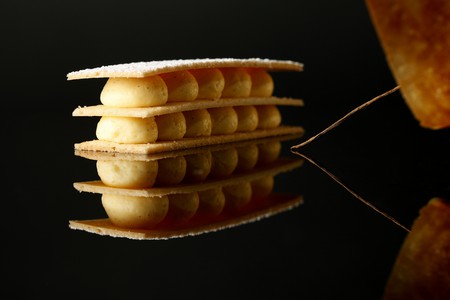 Of all the classic French desserts in the windows of Paris’ pâtisseries, there is none more delightful or devilishly hard to eat than the millefeuille. Traditionally, a mouthful delivers three layers of puff pastry, two of pastry cream, and a topping of either confectioners’ sugar or white and brown icing. But, as you’d expect, the master bakers of the French capital have all put their signatures on an original recipe. 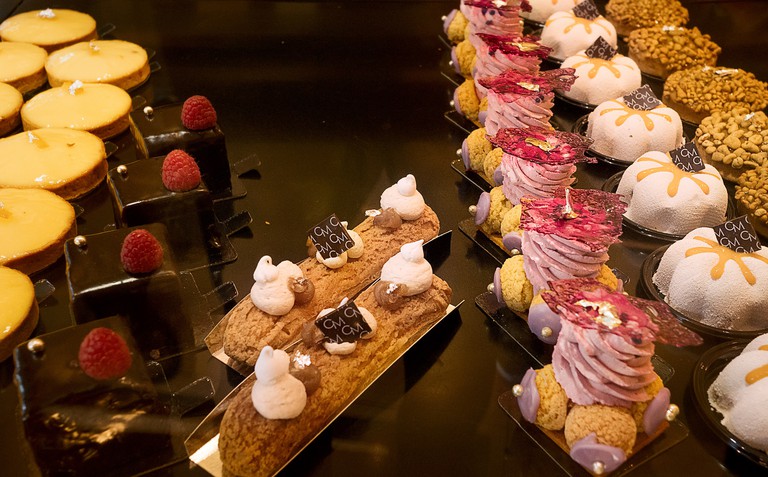 The former pastry chef at the famous Café de la Paix in the Grand Hotel Intercontinental at Opéra, Carl Marletti opened his self-titled shop some years ago in the 5th arrondissement. At one point during his time at the hotel, Marletti and his team were making upwards of 200 millefeuilles per day. In 2005, his ‘cinq-cents feuilles,’ designed by major fashion names like Agatha Ruiz de la Prada, Stella Cadente, Agnès B., and Chantal Thomass, were a sensation. Today, you can choose among praline (6.80€), chocolate and passion fruit (6.30€), seasonal red fruits (6.80€), and vanilla (5.50€) versions. 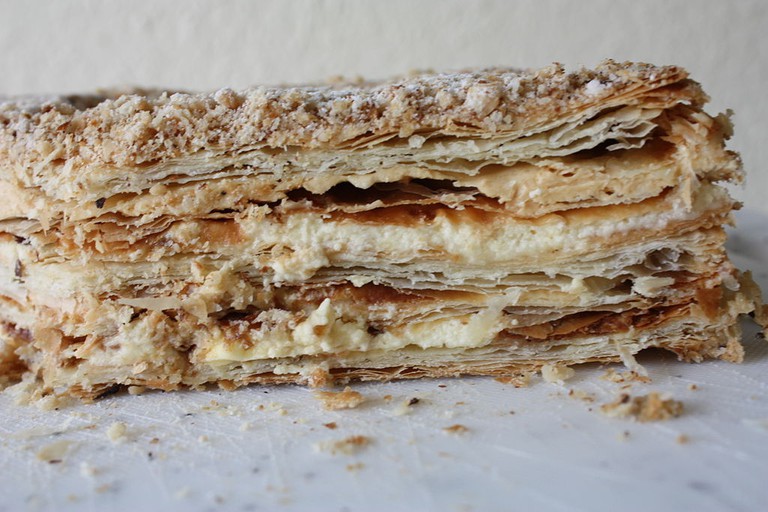 At age 14, Gilles Marchal began his first apprenticeship with the legendary pâtissier from Lorraine, Claude Bourguignon. This led to the sous-chef position at the Hôtel de Crillon, the top job at the Plaza Athénée and the Bristol, and then the role of Creative Director at the Maison du Chocolat. In 2004, he was voted the pastry chef of the year and in 2008 was awarded a medal by the City of Paris. He opened his shop in Montmartre in November 2014 and his extraordinary millefeuilles are 6€ apiece. 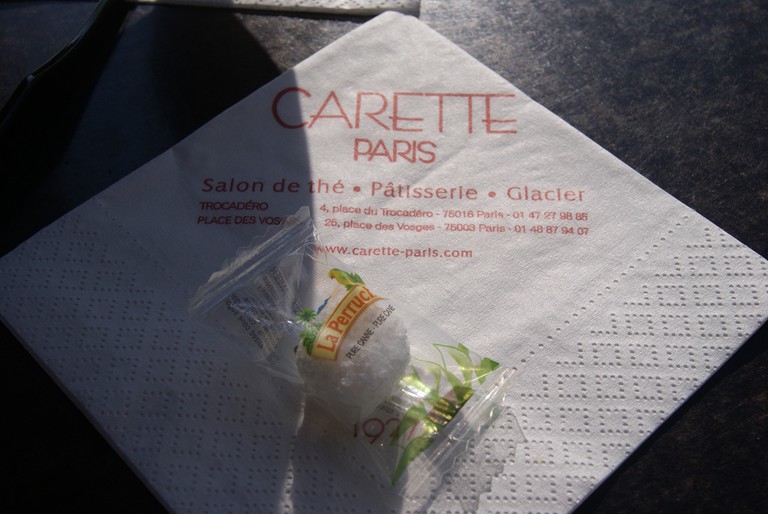 If you can take your eyes off the delicious cakes, pastries, and macarons at Carette, you’ll notice that it is also one of the most attractive pâtisseries in Paris. The first Carette, located on the Place du Trocadéro, was opened by Jean and Madeleine Carette in 1927, and the warm, welcoming, and attentive service they insisted on has endured ever since. Their second location in the Marais is an equally pleasant spot for afternoon tea, and you can eat your millefeuille in the café overlooking the Place des Vosges or in the park itself. Either way, it will cost you 5.50€. 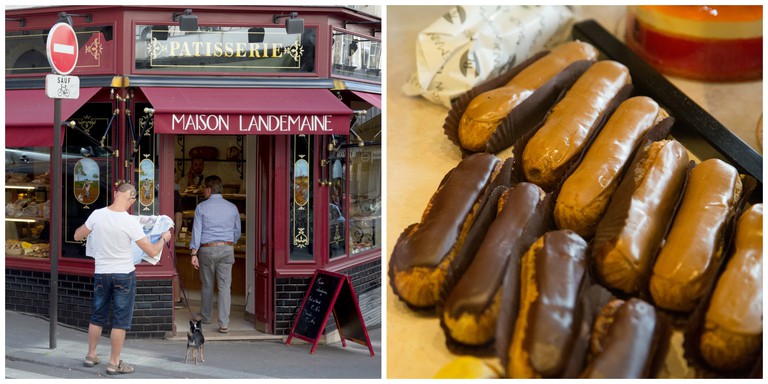 Landemaine is a modern bakery empire. At 26, Rodolphe Landemaine opened his first shop on rue Tolbiac in the 13th arrondissement in 2004. Three years later, this time with his wife, Yoshimi Ishikawa, he opened a second location on the Rue de Clichy. This was followed by locations at Rue des Martyrs in 2008, Boulevard Voltaire in 2009, Rue de la Roquette in 2011, Charonne and Jules Joffrin in 2012, and Crozatier in 2013. Needless to say, their breads, pastries, and desserts are extremely popular. Their millefeuille comes at a very reasonable 3.50€. 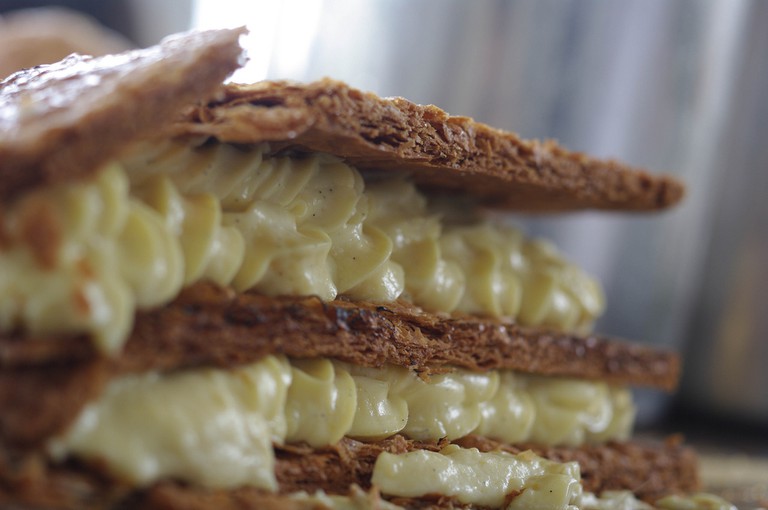 The Pâtisserie de l’Église dates back to 1887. The current team of chocolatier Laurent Demoncy, pâtissier Jean-Claude Vergne, and caterer Clara Demoncy are famed for their sensory and aesthetically pleasing creations, which they produce on a seasonal basis. For Christmas 2016, they have a Buche de Noël inspired by the bakery’s founding. Their sugar-dusted millefeuille costs 4.30€. 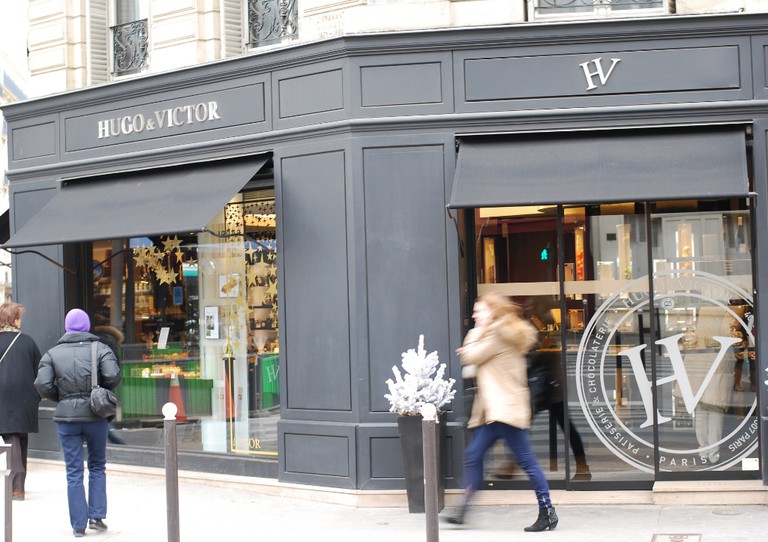 Hugo & Victor is not a traditional kind of pastry shop. Instead, it offers a modern, gourmet equivalent. The flavors incorporated in all their sweet treats have been sourced from journeys around the world, and form the inspiration for the original creations. The three base flavors, which can be found all year, are chocolate, caramel, and vanilla, and five additional flavors are thrown into the mix depending on the season. This pâtisserie also comes with its own sommelier, so you can pair your millefeuille (6.30€) with the perfect glass of wine. 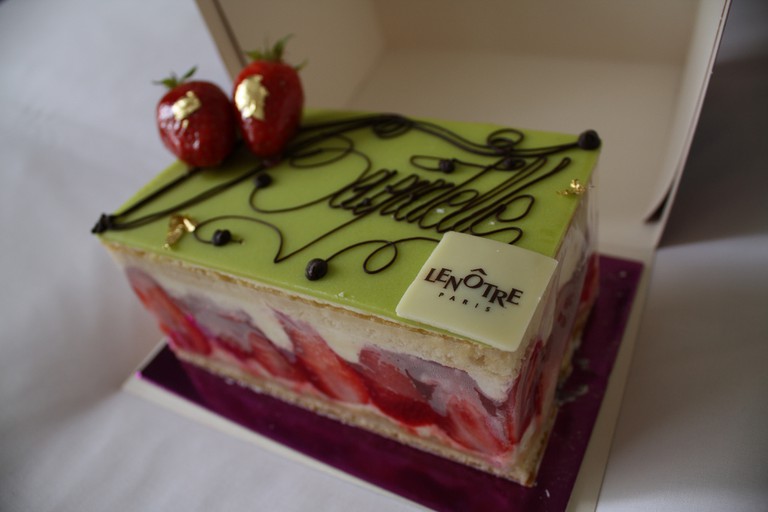 Gaston Lenôtre opened his first pastry shop in Normandy in 1947 but it was another 10 years before he opened one in Paris on the rue d’Auteuil. In 1971, he opened a pastry school in the suburb of Plaisir, from which many of the world’s most famous pastry chefs have come. Today, there are 13 stores across Paris (but we recommend the location at Bastille) where you can try one of their classic millefeuilles for 6.50€. 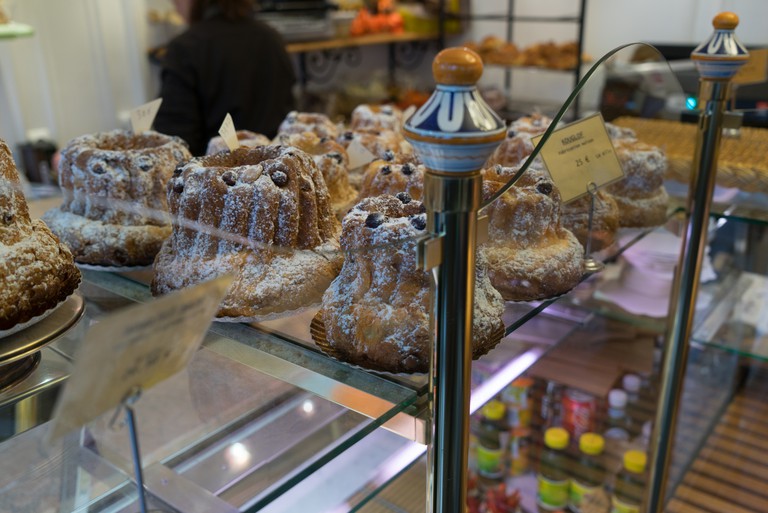 Stéphane Vandermeersch, following in the footsteps of his aunt, dedicated himself to becoming a baker and pastry chef at the tender age of 11 and, a few short years later, he was studying under Pierre Hermé. At his shop near Bois de Vincennes in the 12th arrondissement, which retains some of its original 19th-century features, he continues to produce amazing works of pastry using traditional methods. His millefeuilles have twice been ranked among the best in the French capital and they will set you back only 3.70€. 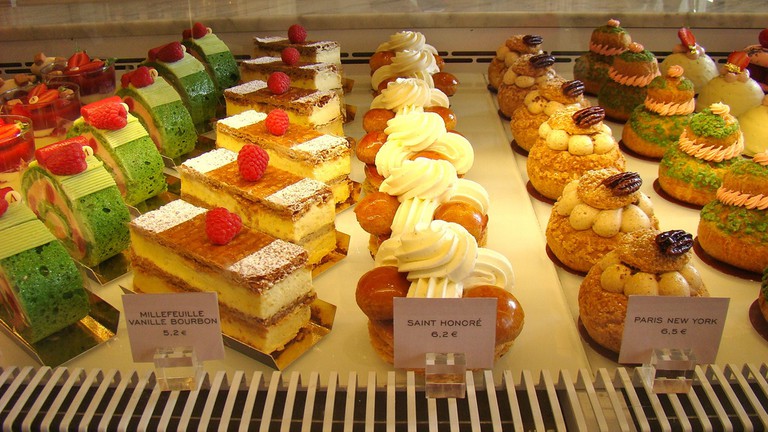 Going for tea (or the world-famous hot chocolate) and cake at Angelina is, at this point, a Parisian tradition. The house was founded in 1903, and now you can find branches on the rue de Rivoli in the 1st arrondissement and inside the Palace of Versailles. Designed by the Belle Époque architect Édouard-Jean Niermans, the central Paris location was once a favored hangout of Proust and Coco Chanel. Their millefeuille, at 6.70€, is the most expensive on our list but, given the surrounds, it’s absolutely worth it. 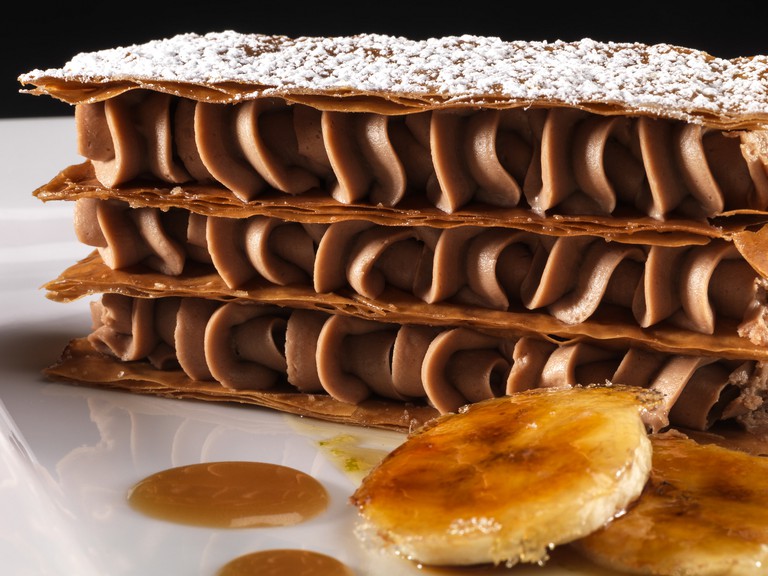 LIBERTÉ is by far the most hipster of the pastry shops on our shortlist. Its owners think of the large, open kitchen as a laboratory into which the customer is invited ‘to build a relationship of trust…to create a place of life and exchanges.’ They emphasize the importance of learning about the breads and pastries, their ingredients, and where they came from before eating them. Their millefeuilles can be explored for just 4€.

Casual, Open Kitchen
Give us feedback