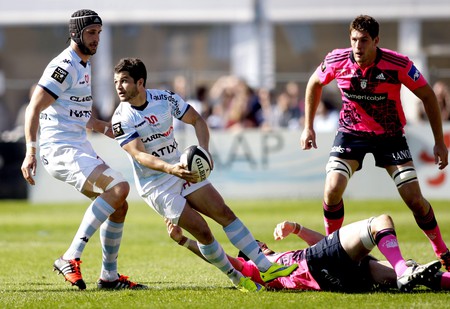 When a plan to combine Paris’s two rugby clubs together was announced in 2017, fans and players alike were confused, angry and upset. The rivalry between Racing 92 and Stade Français was grossly underestimated and a year on is stronger than ever.

Stade Français, or “Stade”, are based in the wealthy 16th arrondissement of Paris, the city’s most western district. Among the gorgeous avenues and prestigious museums are some of France’s most iconic sporting venues, including the Parc des Princes, home to Paris Saint-Germain, and the famous clay tennis courts of Roland Garros.

Stade play their games at the Stade Jean-Bouin, their ground since 1925, just opposite the Parc des Princes. It’s become the catwalk for the extravagant pink kits players have worn since former owner Max Guazzini took over the club.

A little further west, just out of Paris proper, in Hauts-de-Seine, are Stade’s rivals; Racing 92. A club with aristocratic roots, they have also gained a reputation for eccentricity thanks to their on field antics, particularly in the late 1980s.

A group of players, known affectionately as “Le Show-Bizz” produced a number of stylistic gimmicks on the field. On separate occasions, players wore berets, long white trousers, wigs and even pink bow ties during matches. When they won the 1990 French Championship final, not only did they wear the same pink ties as before a game three years before, they even drank champagne at half time.

Franck Mesnel, who played fly-half and centre for Racing at the time, said of the bow ties: “We decided we wanted a symbol for the spirit of Le Show-Bizz. It had to be a little bit French, a little bit arrogant, very paradoxical because we were playing with good performances but also with jokes.”

The thinking behind the stunts was that if you were going to look ridiculous then you had better play well, but also was a way of parodying the snobbish stereotype that much of France supposedly aimed at Parisians. Australian Brett Gosper explained, “We got into this habit of wanting to annoy the provincial sides because they all saw us… as the show ponies from Paris.”

That behaviour encouraged Guazzini to implement a similar attitude down the road. He wanted to help his club, and French rugby, gain a reputation for entertainment and flair. The eclectic kits have worked, as have the occasional games played in much larger stadia; the introduction of cheerleaders and inviting Naomi Campbell and Madonna as club “godmothers”, less so. In reality, it’s all marketing.

Both clubs are the result of mergers from smaller clubs. Although Stade formed in 1883, it wasn’t until they combined with Club Athlétique des Sports Généraux (CASG) in 1995 that it began to resemble something close to its current form.

Similarly, Racing were established as a part of Racing Club in 1890. They combined with US Métro in 2001 to form Racing Métro 92, before dropping the “Métro” from their name in 2015.

In 2017, incredibly, and with no forewarning, the owners of Stade and Racing, Thomas Savare and Jacky Lorenzetti, held a press conference to announce that the two clubs would come together to form a Parisian super club. Both club coaches would remain in charge and pick a squad from the combined group of players.

What followed was a frenzied combination of confused players and disgusted fans gathering at the stadiums to protest, with Stade’s then-captain Pascal Papé arriving at Stade’s ground to speak to fans and find out himself what was going on. Jérôme Fillol tweeted: “How do I explain to my son that the club I’ve fought so hard for no longer exists?”

At the time Paris-based journalist Emma James said: “The news is totally insane. Not least because of the disregard for the players. To see so many international players looking totally bewildered and upset was surreal. I did see one Racing fan on Twitter vowing not to welcome the “vulgar” Stade fans.”

The rivalry between the two clubs is a nuanced one. There has been a “Paris versus the rest” rhetoric that has developed, particularly when Racing played in the division below. Southern rugby powerhouses such as Toulouse, Clermont Auvergne, Bordeaux and Toulon have built up grudges with Stade in particular, with some viewing their media stunts as embarrassing for the game.

That said, the news of the merger illustrated the pride the respective fans felt for their individual clubs, enough for the whole thing to be called off six days later. That ill-feeling goes beyond the fans. Scrum-half Mike Phillips spent three years at Racing 92 between 2013-16 and described how upon joining the club he was told where he couldn’t live because Lorenzetti didn’t want players fraternising with rivals. He said: “You weren’t allowed to live in a certain area because that’s where the majority of Stade Francais players lived and that was pushed by Jacky Lorenzetti, he was in control of that.”

The cancellation of the merger has ensured that the rivalry still exists. Both clubs can call upon some of the world’s best players, whether that be Sergio Parisse, Morné Steyn and Gaël Fickou in Stade’s pink, or Leone Nakarawa, Teddy Thomas or Maxime Machenaud in Racing’s les Ciel et Blanc.

The two clubs have 20 French championship titles between them. Stade won their last title in 2015, with Racing winning the following year. While Stade have moved specific big games to the nearby 80,000 capacity Stade de France to huge success, Racing have moved into Paris’s La Défense Arena – a domed concert hall, filled with fireworks and laser shows on game day.

Both teams are embracing rugby’s relatively recent move to professionalism, while honouring traditions of the past. Crucially, the day two men decided to bring them together proved that an established rivalry should exist for a long time to come.