Seeing Double: The Fake Paris Of The First World War 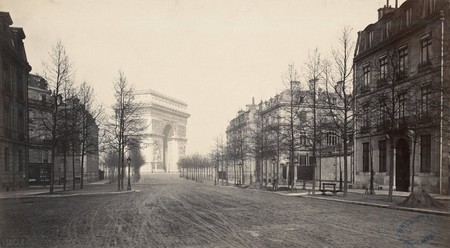 How do you keep a city as beautiful as Paris safe during a war? With the most destructive war mankind had yet seen raging at their doorstep, the 2,000 year old city had to devise a crafty solution to escape the line of fire during WWI. Read on for a surprising, and oft-forgot, piece of Paris history.

As if one City of Lights wasn’t already enough, for a few months towards the end of WWI, Paris almost had a twin. Wily military strategists, understandably tired of the enemy dropping bombs on their beautiful hometown, decided that the best way to keep it safe was to bring in a stunt double; a lifesize mock up situated a few miles west which would act as a decoy to draw fire from Paris proper.

There were a number of proposed sites for the doppelganger Paname with first prize going to an area of woodland on the outskirts of a sleepy little suburban town called Maisons Laffitte, conveniently nestled in a bend of the river Seine remarkably similar in size and shape to another located just a few miles north of the capital. These days Maisons Laffitte is a decidedly upmarket retreat from the noise and fumes of the inner city, a peaceful bourgeois haven for bankers and lawyers with excessively expensive clothes and unusually named children; a million miles from the bizarre scene that would have unfolded there had the armistice not been signed before construction could be completed. 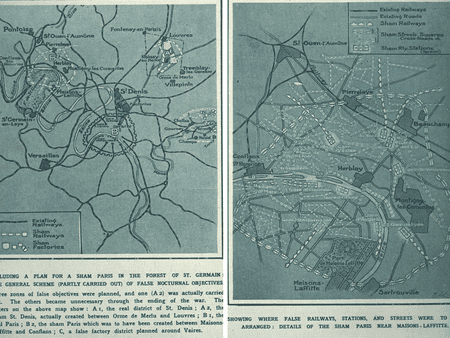 Plans for Paris Mark Deux were ambitious. In total, three separate zones were sanctioned for construction; Zone A to the north east of Paris which would be designed to look like the large suburban regions of Saint Denis and Aubervilliers and would include dummy versions of the Gare du Nord and Gare de l’Est train stations; Zone B to the north west at Maisons Laffitte, the Faux Paris itself, a sprawling network of replica buildings and landmarks encompassing everything from the Champ de Mars to the Champs Élysées, the Trocadéro Palace to the circular railway that skirted the outer limits of the city, the Chemin de fer de Petite Ceinture; and finally, Zone C, which would be built to the east of the city and would mimic a vast, entirely fictional, industrial area comprised of a series of enormous factories filled with absolutely nothing.

The idea of a to-scale decoy city made of wood and canvas dumped out in the leafy suburbs just a few miles from Paris’ instantly recognizable landscape may seem a little far fetched, if not completely bonkers. However, as the war progressed and French anti-aircraft technology improved, the daylight airship bombings which had previously caused such havoc were eventually rendered too risky. As such, any bombing raids were forced to take place under cover of darkness and it was at this point that an illuminated sham Paris began to make a little more sense.

French fighter pilots reported that during night flights they tended to look for certain familiar features of the landscape below when attempting to locate the city. According to their research, railways, lakes, rivers, roads and woodland were the most useful indicators that they were in the neighborhood. Armed with this information, the mastermind behind the replica project, Fernand Jacopozzi, along with his team of highly capable engineers set to work making life even harder for their German counterparts, already struggling to find their bearings in an era before radar or precision targeting. With the chief intention of confusing an enemy pilot sufficiently that he would start to doubt his own convictions, the construction of Paris’ mirror image began in earnest at Villepinte to the northeast where a working model of the Gare de l’Est gradually began to take form.

No detail was overlooked: complex, sprawling networks of lights arranged skillfully creating the impression of railway tracks and avenues, as well as storm lamps clustered together on ingenious moving platforms designed to simulate vast steam trains in motion. Immense empty sheds masquerading as factories had translucent sheets of painted canvas stretched tightly across their wooden frames which were illuminated from underneath, an arrangement that to anyone passing overhead would look remarkably like the dirty glass roofs characteristic of industrial buildings. Working furnaces were also installed to add an extra dimension of reality and the factory’s lights were even configured to dim noticeably during an air raid, fooling enemy pilots into believing that the facsimile buildings were, in fact, occupied.

In the end it was only this small part of Zone A that saw the light of day. The German bombing campaign came to an end in September 1918 and the armistice was signed at Compiègne two months later. The mock factories and railway network at Villepinte were dismantled shortly after the cessation of hostilities, so that, by the beginning of the 1920s little remained of the project at all. Though his fascinating idea never really got much further than the drawing board, the designs of Fernand Jacopozzi inspired similarly ambitious schemes in the United States during the Second World War. Jacopozzi himself went on to become one of the fathers of modern illuminated advertising billboards, with perhaps his most memorable project being the famous ‘Citroen’ logo that brought light to a previously sombre Eiffel Tower. 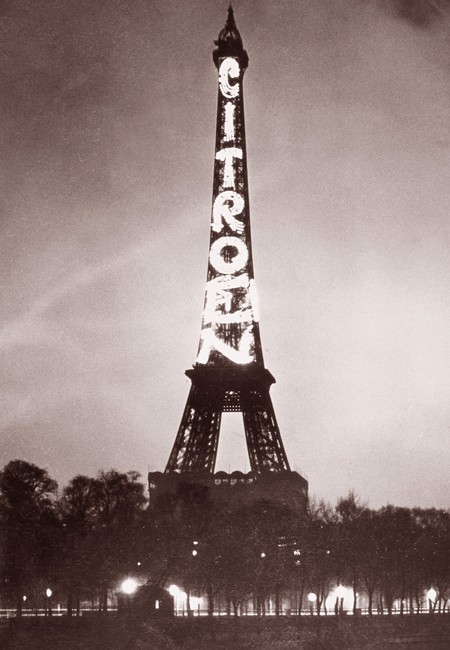