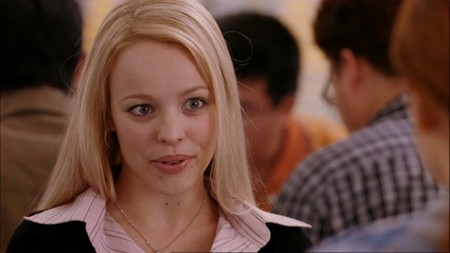 Rachel McAdams often portrays the love interests of leading men like Ryan Gosling and Channing Tatum. She might be in numerous chick-flicks, but McAdams demonstrates her versatility in dramatic roles as well. Here’s the cream of the crop.

In this high school fantasy film, Rachel McAdams plays the ‘mean girl’ named Regina George. Even though McAdams had previous roles as the romantic interest of the leading man, she was able to show her wicked side in this raunchy comedy. Lindsay Lohan stars as Cady Heron, a teenager who falls in love with Aaron Samuels, Regina’s ex-boyfriend. Rachel McAdams might be the nemesis, but this role demonstrates McAdams’ ability to play a wide variety of roles, which includes being the alpha Plastic of the A-list girl clique in North Shore High School.

Rachel McAdams is the leading lady in this romantic drama. This time, though, the leading man is Channing Tatum. Rachel McAdams’ character, Paige Collins, loses her memory after surviving a horrific car accident. When she sees her husband, Leo, after regaining consciousness, she mistakenly believes that he is her doctor instead of her husband. Interestingly, the stars of this film have appeared in other adaptations of Nicholas Sparks’ novels: McAdams was in The Notebook, and Tatum was in Dear John. With such experience, these two actors star in a beautifully romantic film that audiences will hopefully never forget.

This animated version of Antoine de Saint-Exupéry’s famous story features the voice of Rachel McAdams as the little girl’s mother. This highly imaginative adaptation features an all-star cast that includes Marion Cotillard as the Rose, James Franco as the Fox, and Jeff Bridges as the Aviator. The little girl learns valuable life lessons during her adventures with the Little Prince, and her mother offers support along the way. All that Rachel McAdams’ character really wants is for her daughter to be ready for adulthood, which reveals the tender love and care within McAdams’ vocal performance.

Terrence Malick is a unique filmmaker because of his bold style and artistic cinematography. To the Wonder features a love triangle between Neil (Ben Affleck), Marina (Olga Kurylenko), and Rachel McAdams as Jane, Neil’s former flame. Jane and Neil try to reconnect, but Marina has to cope with hard times. Interestingly, this film is the last film that Roger Ebert reviewed before his death. Malick might receive criticism for his films’ enigmatic qualities, but Rachel McAdams still plays a major role in all of the romantic films that she appears in.

Rachel McAdams earned her first Academy Award nomination in this intensely dramatic film. Spotlight is about how investigative journalists from the Boston Globe uncovered a major scandal that shook the Catholic Church. McAdams plays the real-life investigative journalist Sacha Pfeiffer, a woman determined to discover the truth underneath the secrets and lies of Catholic priests. In spite of its controversial subject matter, the film won two Academy Awards in February 2016, which were Best Original Screenplay and Best Picture. Hopefully, Rachel McAdams will be able to receive additional nominations in the near future after the success of this film.

This film might be labeled as a ‘romantic comedy,’ but it actually has a deeper message. Rachel McAdams plays Mary, who is the love interest of a time traveler named Tim. He can only travel to his personal past to make corrections to, supposedly, have a better future. Throughout the film, Mary has to deal with the mistakes that Tim makes, and how he attempts to change the past using his special gift. By the end of the film, they both realize that time is the greatest gift of all because that is the stuff that makes up life itself.

Based on Audrey Niffenegger’s novel, this romantic drama is the first film that Rachel McAdams stars in which features time travel. She would later play romantic parts in films that feature time travel like Midnight in Paris (2011) and About Time (2013). Eric Bana stars as Henry, a Chicago librarian with a genetic disorder that causes him to time travel, which complicates his relationship with Clare. Even though the original author might have preferred Lauren Ambrose as Clare, Rachel McAdams still manages to deliver a tear-jerking performance in a film about love and its complications.

In Woody Allen’s delightful romantic comedy, Rachel McAdams plays Inez, the fiancée of a screenwriter named Gil. This is the second movie that Rachel McAdams stars in which involves time travel. Specifically, Inez would always be confused as to why her fiancée, played by Owen Wilson, would have to wander the streets of Paris every night at midnight. Little does she know that Gil can magically go back to 1920’s Paris. This film earned Woody Allen another Academy Award for Best Original Screenplay, and it reminds audiences that Rachel McAdams excels as the love interest of the leading man.

This adaptation of the famous stories by Sir Arthur Conan Doyle features Rachel McAdams in the role of Irene Adler. Once again, she plays the love interest but this time to Sherlock Holmes, played here by Robert Downey Jr. Irene might have been Sherlock’s former adversary, but the two of them have an implied love affair. McAdams would later reprise this role in Sherlock Holmes: A Game of Shadows. Such a role allowed Rachel McAdams to play a romantic character in a lavish period drama while also expressing love with a sense of style.

This famous adaptation of the novel by Nicholas Sparks cemented the idea of Rachel McAdams being the leading lady in romantic chick-flicks. The movie itself might seem like a cliché love story, but audiences cannot help themselves when it comes to Rachel McAdams’ portrayal of Allie. The kiss in the rain that she shares with Ryan Gosling is iconic, and numerous parodies of that scene have been done. Rachel McAdams might be currently exploring different types of film roles, but this film allowed her to become the star that she is today.