Paris To Pedestrianize The Banks Of The Seine 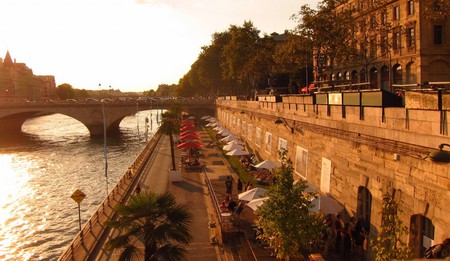 Plans are afoot in Paris to pedestrianize two miles of Seine-side highway on the Right Bank. The stretch of the Voie Georges-Pompidou between the Jardin des Tuileries and the Pavillon de l’Arsenal – the 4.5-hectare space dedicated on Sundays to joggers and cyclists and each summer to the Paris Plage – will initially be closed for a six-month trial. However, the idea is not without its opponents, not least among the 43,000 drivers who used this road to traverse the city west to east every day.

This scheme was a cornerstone of Paris Mayor Anne Hidalgo’s 2014 election campaign. Her vision is to permanently transform this source of air and noise pollution into an urban park, one equipped with playgrounds, wooden terraces, waterside gardens, restaurants and terrains for playing boules. The socialist city hall also hopes that its closure will better preserve the riverfront UNESCO World Heritage Site between the Pont de Bir-Hakeim and the Île Saint-Louis and further increase its popularity with visitors and residents alike.

The Conseil de Paris will vote on the proposal on September 26th.

The trial was approved by Paris’ Police Prefect, Michel Cadot; however, the road will be reopened in the event of a ‘major traffic problem.’ Cadot also has the final say on its permanent closure.

High-profile ecologists like MEP José Bové and photographer Yann Arthus-Bertrand described the city center motorway in a Huffington Post article as a solution of the past creating problems today, and Christophe Najdovski, the deputy mayor and head of transport and public spaces, is another big supporter of the plans. Citing the experience of other major cities, he believes traffic will simply evaporate. ‘Behaviour will change. Habits will change. And our objective, to reduce traffic and thus pollution, will be achieved,’ he said.

However, a public consultation on permanent closure, set up by city authorities and published in a report on August 22nd, opposed the plan due to insufficient data on the real impact on pollution levels.

Some ferocious opposition has also come from right-wing politicians and motoring groups, who claim that the initiative will only displace pollution around the capital and prolong suburban commuters’ journeys by up to 20 minutes. Pierre Casseray, a representative of the popular 40 Millions d’automobilistes organization, told The Guardian that ‘If Anne Hidalgo wants to ride a bicycle then that’s up to her, but why should motorists suffer? Let’s make no mistake, her goal is purely electoral and this stupid idea will please two or three bobos (bourgeois-bohemians) and upset 10 million others. She doesn’t care about the people in the banlieues because they don’t vote for her.’

The opposition center-right Les Republicains party are in agreement. Valérie Pécresse, its Île-de-France president, has argued for a twelve-month trial to account for summer spikes in pollution and to ensure a decision isn’t taken ‘without real consultation and without taking into account the impact on the banlieue.’ Their city hall leader, Nathalie Kosciusko-Morizet, announced that legal action to block the project was even being considered.

Nevertheless, history is in Hidalgo’s favor: Paris’ previous mayor, Bertrand Delanoë, successfully completed a similar project between the Musée d’Orsay and the Pont de l’Alma three years ago. The road remains closed to vehicles in preparation for the trial which will officially begin in October and is currently the site of a climate change exhibition entitled Cap Sur la Cop 22.