Paris Through A Lens: An Introduction To Robert Doisneau

Robert Doisneau (1912-1994) was one of the most celebrated photographers of the 20th century, capturing life in his native city Paris with all the perception, originality, and beauty found in the work of Impressionist artists. His work draws comparison to Monet, Renoir, and Manet, who immortalised the city through their art almost 100 earlier. These six photographs encapsulate Doisneau’s talents and his aesthetic ethos. 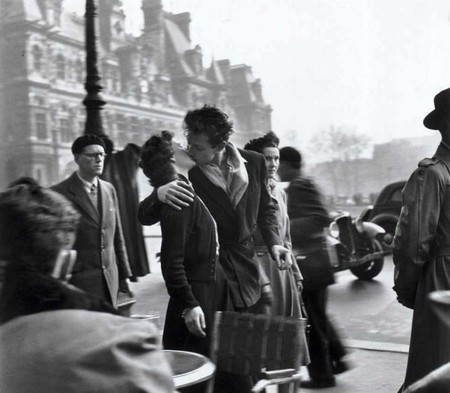 Doisneau’s most famous photograph, The Kiss at the Town Hall, became a symbol of the re-emergence of Paris as the city of love and idealism after years of wartime occupation. The youthful couple, who remained unidentified until 1992, came to represent a new generation of Parisians, no longer repressed by the war, but romantic, playful and free. Although the photograph was staged, Doisneau managed to give the image an air of spontaneity, slightly blurring the his subjects’ surroundings, simultaneously capturing a sense of urban dynamism while emphasising the clarity and stability of love amidst the hustle and bustle of day to day life. The couple may have only stayed together for nine months, but their moment of passion has endured for over half a century as one of the most iconic images of young romance ever taken in Paris and beyond. 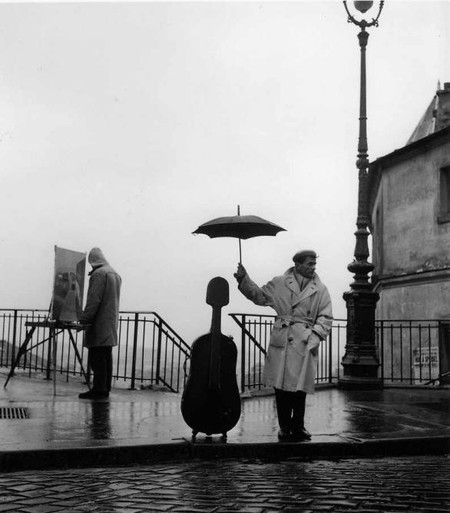 Doisneau took numerous photos of his friend, the cellist Maurice Baquet, during the 1950-60s. The photographer sought to demonstrate his subject’s passion for music in an original way, choosing to show how the cello was an integral part of his life, rather than a mere instrument played for performance. Here, Doisneau touchingly captures Baquet’s protective affection for his cello, shielding it, rather than himself, from the rain. The image is a perfect example of Doisneau’s subtle visual wit, placing the cello in the position we might expect to see a woman, and suggesting that a love of music and the arts in general is not simply intellectual, but evokes a similar kind of emotional depth as a real-life romance. The man seen painting in the background brilliantly highlights this notion of a devotion to art, as even the rain cannot deter him from continuing his work. 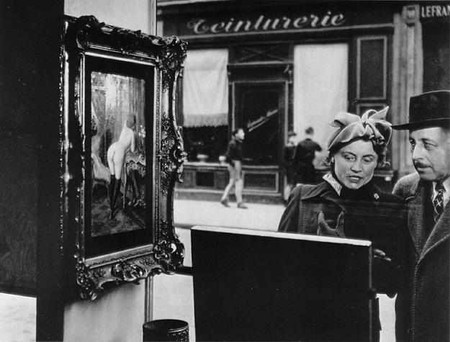 Doisneau is often praised for his ability to comment on society and individuals through photographic nuance and understatement. The observational humour of this photograph rests entirely on nothing more than the direction of the subjects’ gaze. In the 1980s, the feminist critic Griselda Pollock drew attention to the photo once again, citing it as a clear example of how the role of women in art is undercut by men’s tendency to simply objectify women. While Doisneau may not have been actively seeking to critique the art-world with his work, the image, like his collection of photos of people reacting to the Mona Lisa, is indicative of the photographer’s desire to illustrate that true art exists in everyday people and situations. As Doisneau himself wrote: ‘the marvels of daily life are exciting; no movie director can arrange the unexpected that you find in the street’. 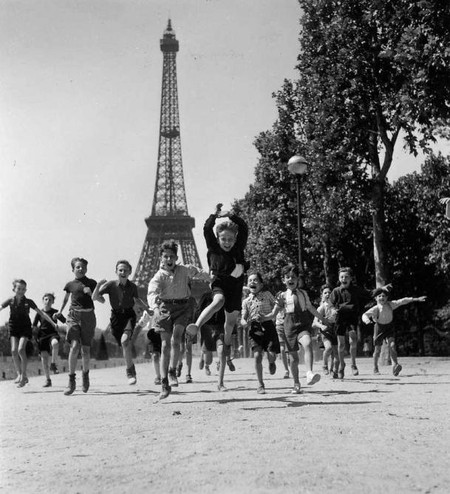 his photograph includes two of Doisneau’s favourite subject-matters: the Eiffel Tower and children at play. Doisneau was clearly taken with the vitality and insouciance of Parisian children during the relatively austere post-war period, and looked to capture their boundless optimism and energy in his work. Children may often be marginalised by society, but as this photograph beautifully exhibits, Doisneau wanted to show that the whole city was their playground. For Doisneau, no landmark was more fundamental to Paris’ identity than the Eiffel Tower, and he never ran out of ways to include it inventively in his works. He summarised his adoration for the monument by saying: ‘going up the Eiffel Tower offers a panoramic view of Paris, which itself is no longer recognizable, since it lacks the all-important silhouette of the Eiffel Tower’. 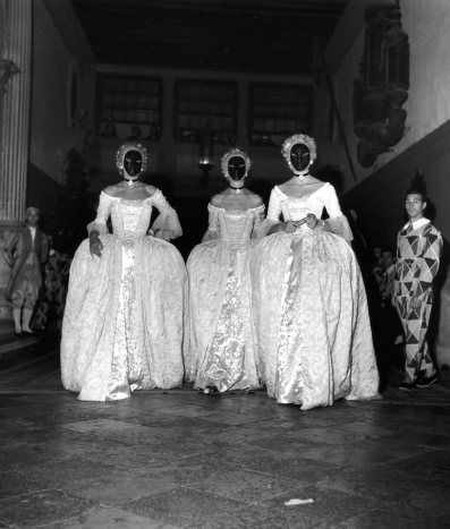 As much as Doisneau’s photography is well known for its artistic elevation of members of the working class, he was also prone to taking pictures of high-society events. This photograph of three women at a masquerade ball is a reminder that the fin-de-siècle bourgeoisie was still very much alive in mid-20th century Paris. While the rest of the city was modernising and adapting after the war, a small sector of society was still caught in the past: attending lavish, formal balls just as they had at the end of the previous century. This photograph, when juxtaposed with Doisneau’s photos of miners, vagrants, and bohemian artists, serves to underline the extent of the disparity inherent in Paris. These three masked women seem to be altogether from another era and another world from Doisneau’s other subjects, but they are a key part of the diverse social mosaic that the photographer’s portfolio forms. 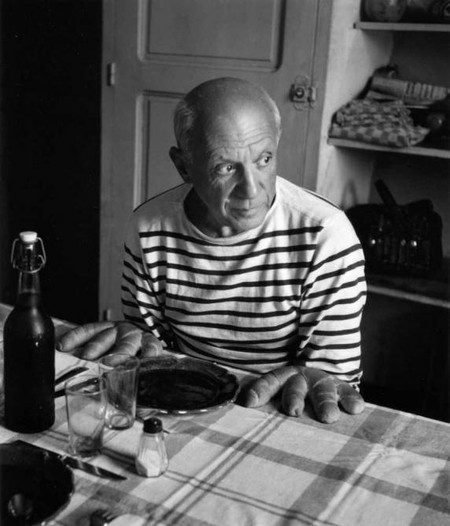 Doisneau took photographic portraits of many of Paris’ most famous writers, artists, architects and designers, including Coco Chanel, Christian Dior, Jacques Prevert, Georges Braque, and arguably the greatest painter of the 20th century, Pablo Picasso. This photo of the artist having lunch takes him out of the context of the genius in the studio; people often have preconceptions of Picasso as a mercurial, eccentric figure, but Doisneau’s portrait serves to strip away all the legends and just leave us with ‘Picasso: The Man’. The finger-shaped loaves of bread, positioned below Picasso’s arms, replace the very thing that an artist is celebrated for, and leaves the person who exists beyond the exceptionally gifted hands. Doisneau’s photographs were not created with the intention of further promoting his renowned subjects, but rather to release them from their fame and to present them as actual humans and not just icons.