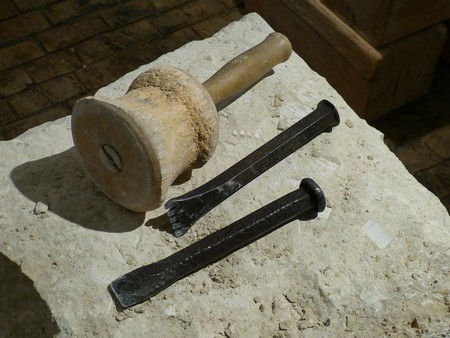 Thanks, apparently, to planned engineering works, migrants living under a railway bridge at Porte de la Chapelle in Paris’ 18th arrondissement have for weeks been caught literally between a rock and a hard place. Mayor Anne Hidalgo has defended City Hall’s decision to dump dozens of boulders on their makeshift camp, a move which has enraged local activists and engendered an inspiring response from the country’s stonemasons.

This story begins in the early hours of Friday, February 10th when municipal construction workers displaced sleeping migrants, most of whom are refugees from Sudan and Afghanistan, in order to install preparatory materials for a tramway extension. The concrete island, wedged between the Boulevard Ney, Autoroute du Nord, and numerous high-speed flyovers connected to the Périphérique, is home to approximately 145 people and is popular given its proximity to the neighborhood’s migrant reception center. 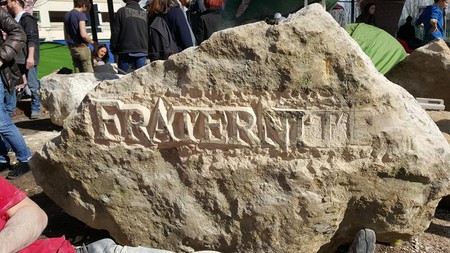 The appearance of these huge rocks, which have made a difficult situation even more uncomfortable, caused immediate uproar among Paris’ migrant-focused charities. Marin, a student and activist, summed up the collective mood in an interview with Le Parisien: ‘It’s sad to see that the town hall spends money just to prevent people on the street from sheltering under a bridge.’

However, by Wednesday, February 15th Hidalgo had responded to her critics in a press release, rejecting the accusation that this had been an ‘anti-migrant’ act and citing reasons of security for the intervention. The message went on to state that ‘[i]t is particularly incongruous to think that the City of Paris intends to “secure” its public space with stones, which it would position in all its squares, streets or sidewalks. The point is not to “hide” reality — the reality that hundreds of people of all nationalities sleep every day on the street — but to offer durable solutions to those who do not have a roof.’ 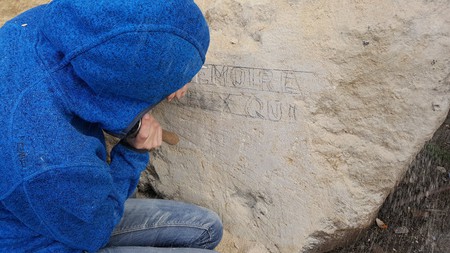 Unsatisfied with this response, campaigners mobilized on social media and by Saturday, February 25th had drummed up the support of a dozen stonemasons from across France. The group of artisans gathered in the north of Paris at 9a.m. with the intention of first moving the stones to make more space for sleepers and then to sculpt some into useful objects like tables and chairs and to engrave others.

By 12:30p.m., the police had shown up and the group thought it best to disperse so as not to cause undue trouble for the camp’s residents. Nevertheless, they promised to return to finish their work, with or without council consent.

They returned on Saturday, March 11th, this time with more than 20 stonemasons in tow. Some of the boulders now bear the words of the motto of the French Republic or messages of support or remembrance, while others have been carved into sculptures of the migrants, representing their struggles up ’til this point. 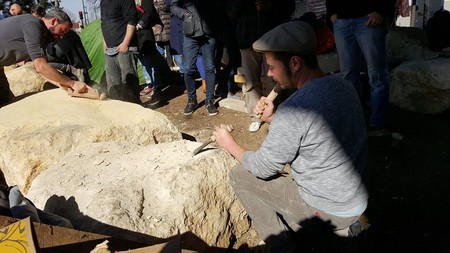 Frédéric Thibault explained the motivations of those involved to FRANCE 24: ‘Stone is usually seen as a material used for building ties, to have some meaning… rather than being used as an impediment… The message being sent was not very positive. And in the current climate where people are scared of each other along with other things, this was an opportunity to say we did not agree.’

According to government figures, more than 40,000 migrants have arrived in Paris in the past two years, which represents, on average, 1,700 people per month. In its first three months, the Porte de la Chapelle reception center, which opened in November 2016, successfully housed 5,200 people.