Most Beautiful Contemporary Buildings in Paris

Most Beautiful Contemporary Buildings in Paris

Louvre Pyramids | © photophilde/Flickr
While many equate Paris with traditional Haussmann buildings and Gothic wonders like the Notre Dame Cathedral, there is also a long, if not controversial, history of cutting edge architecture in Paris. Who can forget the Centre Pompidou, Grande Arche de la Défense or Pyramide du Louvre? Nonetheless, this love of bold architecture has recently resulted in some beautiful and innovative works. Here is our roundup of the city’s recent avant-garde architecture.

Museum
Fondation Louis Vuitton | © Forgemind ArchiMedia/Flickr
The Fondation Louis Vuitton is part modern art museum and part architectural marvel. Designed by Frank Gehry and opened in 2014, the museum is located in the verdant and historic Jardin d’Acclimation. Its most striking features are the billowing glass panels that envelop its top, below which are numerous terraces that offer spectacular views of Paris. On the ground floor, you will find ‘Inside the Horizon’, Olafur Eliasson’s mesmerizing light and mirror installation. Visit the Fondation Louis Vuitton on a beautiful, sunny day and you risk spending the day discovering the architecture and forgetting about the artwork inside.
More Info
Open In Google Maps
8 Avenue du Mahatma Gandhi, Paris, Île-de-France, 75116, France
+33140699600
Visit website
Give us feedback

Museum, Building, Concert Hall
Philharmonie de Paris | © Francisco Anzola/Flickr
Designed by visionary French architect Jean Nouvel, the Philharmonie de Paris is much more than a concert hall. The exterior is partially comprised of more than 200,000 bird-shaped aluminum tiles in various shades of gray. To help visitors appreciate the beauty of the surrounding Parc de la Villette, the building is edged in winding ramps and capped with a massive rooftop picnic space. The interior walls of the main concert hall are entirely made of rounded edges with futuristic undulating balconies. Though its January 2015 opening was not without controversy, the Philharmonie de Paris is still a welcome cultural and architectural addition to the city.
More Info
Open In Google Maps
221 Avenue Jean Jaurès, Paris, Île-de-France, 75019, France
+33144844484
Visit website
Give us feedback

Building, Park, Museum
Les Docks - Docks en Seine | © Rog01/Flickr
If you have transited through Paris’ Austerlitz train station recently, chances are you have seen the Cité de La Mode et du Design. The unabashedly green complex, completed in 2012 and designed by Jakob + MacFarlane, resembles a lightning bolt suspended precariously over the Seine. Once an industrial storage space, the Cité de La Mode et du Design is now a chic ‘city’ that houses a fashion institute, a trendy art museum and a popular rooftop bar. In the summer, the crevices and tunnels of the complex are converted into exhibition spaces and a skate park. The wooden, beach boardwalk-like walkways and graffiti covered concrete walls give this bold complex a unique ambience.
More Info
Open In Google Maps
34 Quai d'Austerlitz, Paris, Île-de-France, 75013, France
+33176772530
Visit website
Give us feedback

Ministry of Culture and Communication

Museum
Ministry of Culture and Communication | © Simdaperce/WikiCommons
In the late 1990s, the Ministry of Culture and Communications decided to regroup all of their offices into adjoining buildings in a historic part of Paris. However, how could they convey that the two very different looking structures housed the same ministry? Architects Francis Soler and Frédéric Druot solved this problem by encasing the buildings in a strikingly intricate, laser cut metal lattice. Shimmery during the day and shadowy at night, the buildings are worth a visit, especially since they are conveniently located steps from Palais Royal and the Louvre museum.
More Info
Open In Google Maps
182 Rue Saint-Honoré, Paris, Île-de-France, 75001, France
+33140158000
Visit website
Give us feedback

Islamic Art Wing at the Louvre

Islamic Art Wing at the Louvre

While the last modern architectural addition to the Louvre, I.M. Pei’s pyramid, remains divisive, the equally avant-garde Islamic Art Wing has been warmly received since its opening in 2012. Designed by Italian architect Mario Bellini and French architect Rudy Ricciotti, the highlight of the building is its golden, undulating roof. Made of metal mesh, it looks as if a veil billowing in the wind became frozen in time. The lack of major pillars supporting the massive roof furthers the sensation that the structure is floating. Below is a three-story building, two of which are underground. 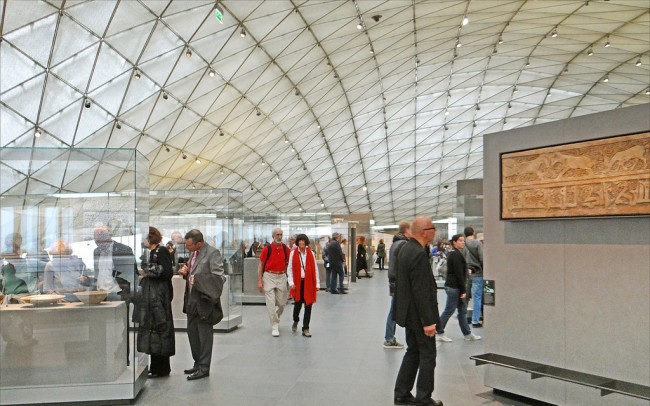 Building
Halle Pajol | © Sylvia Fredriksson/WikiCommons
Formerly an abandoned warehouse, Halle Pajol is now lauded as an example of urban transformation at its best. Renovated by Jourda architects and completed in 2014, the goal was to maintain the original look and feel of the area while creating an environmentally sustainable building. To achieve this, the designers kept the skeleton of the original warehouse but renovated it with energy efficient materials. The result is a modern and inviting complex that houses vibrant bars and eateries as well as a 330-bed youth hostel. More impressively, on the roof you will find the largest urban solar power station in France. This innovative building is part of a sweeping initiative to turn the up-and-coming neighborhood into the first Parisian eco-district.
More Info
Open In Google Maps
20 Esplanade Nathalie Sarraute, Paris, Île-de-France, 75018, France
Give us feedback

Concert Hall
Architect Renzo Piano, one of the minds behind the Centre Pompidou, wanted to create a contemporary workplace with a convivial and creative vibe befitting of a music industry giant. The result, which opened in 2005, was a veritable village of low, terracotta-clad, pitch-roofed buildings set in a lush garden. The open interior and maximization of natural light gives the work space the feel of a loft-atelier rather than corporate offices. Now owned by Warner Music, the complex also features three recording studios and a concert hall for musical events.
More Info
Open In Google Maps
118 Rue du Mont-Cenis, Paris, Île-de-France, 75018, France
+33156557777
Visit website
Give us feedback
Book with our partner and we will earn a small commission.
Give us feedback