Meet the Founder of Breakfast in America, Craig Carlson 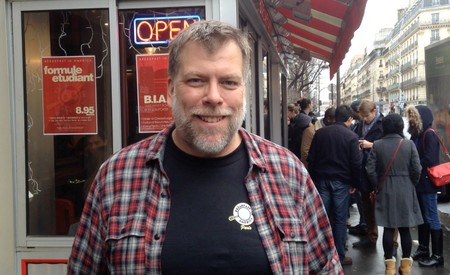 Despite the patisseries and Michelin-starred restaurants, there are few things that expats in Paris miss more than the food they grew up with. Thanks to Craig Carlson’s immensely popular diners, this homesickness can be cured in the time it takes to order a stack of pancakes soaked in maple syrup. Culture Trip talks food, film, and writing with the man who brought the American breakfast to Paris.

Can you tell us a little bit about how Breakfast in America began?

I have to give a little backstory leading up to my getting the idea of opening up Breakfast in America. First, I was an exchange student in France for my ‘Junior Year Abroad’ when I was a student at the University of Connecticut. The moment I arrived in Paris, I instantly fell in love with the country and the language… and, most surprisingly, the cinema, thanks to all the repertory theaters in the city. That’s when I decided to pursue film as a career, moving to California and getting a degree from the University of Southern California in film and television. Thanks to my French, I ended up getting a job on an American TV show that was being edited in Paris. Once the show ended, I knew I wanted to live in Paris. But doing what? Back in the States, my friends took me to my favorite diner where I ordered a big ol’ American breakfast – hamsteak and eggs, buckwheat pancakes and home fries. The moment my breakfast feast arrived, I stared at it and said, ‘This is the one thing I missed in Paris!’ (After a year of croissants and pains au chocolate for French breakfast, I was dying for an American breakfast). And just like that the idea for Breakfast in America hit me. 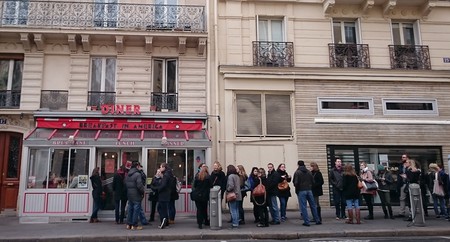 How does Hollywood compare to the Paris restaurant business?

In many ways, Hollywood and the restaurant business are actually quite similar. In fact, I don’t think it’s a coincidence that a lot of movie stars own restaurants. As I say in my book, when I was putting my restaurant together I realized that it was a lot like making a movie. You’ve got all the major components: budget, location scouting, script (as in the theme or story of the restaurant), set design, props, lighting, music, cast and crew, and of course, catering. In fact, every day my restaurant is open, it’s like putting on a show. And of course, even if the pipes are leaking or a cook is on strike or you run out of maple syrup, the show must go on! 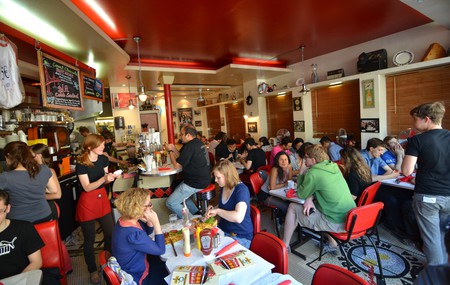 Inside Breakfast in America │ Courtesy of Breakfast In America

France has a reputation for being overly bureaucratic but how did you find setting up a business here?

Setting up the business in France was the easy part, (although getting a commercial visa was not). For me, the hard part is running a business in France. That’s because there is virtually no flexibility. Here are just two examples: Take France’s infamous 35-hour workweek. I’d just assumed that overtime started from the thirty-sixth hour on. Not so. Say you’ve hired someone part-time at twenty hours a week. Well, for them, overtime starts on the 21st hour. Even worse, nobody is allowed to work more than 20 percent beyond their contracted hours. And the second most difficult challenge of all is that after their trial period, employees in France are on lifetime contracts called CDIs, which means it’s nearly impossible to fire anyone, even if they don’t show up for work or even if they’re stealing.

What advice would you give to any other young expats looking to do the same?

Despite what I just said, I would encourage young expats to open their own business in France, because the rewards far outweigh the headaches. The advice I would give, however, is to get as much information on labor laws as possible. Once that’s done, get used to the fact that nothing in France is black and white – especially labor laws and doing business here. In other words, you have to get used to what I call, ‘living in the gray,’ meaning, with France’s contradictory laws, it’s impossible to get a straight answer from anybody here!

How have Parisians reacted to the American cuisine and culture at Breakfast in America?

At first it was a challenge. Take for example the word ‘Diner’. In France, it means ‘to dine’ or ‘to eat dinner’. Of course, Breakfast in America is a breakfast joint, which meant I had to teach the French the American meaning of the word ‘Diner’. Second, I made it my mission to show the French that there was more to American cuisine than ‘amburgers – in my case, breakfast, my favorite meal! One of my proudest moments was when a French customer ordered pancakes and eggs at 10PM. ‘I can order breakfast at night?’ he asked incredulously. ‘Mais bien sûr!’, I said. 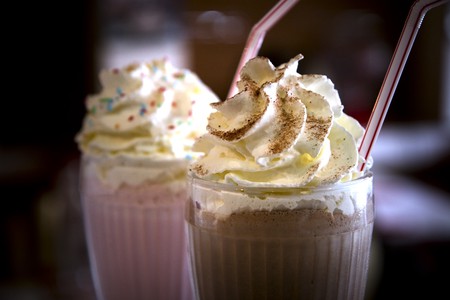 Milkshakes at Breakfast in America │ Courtesy of Breakfast In America

What item on the Breakfast in America menu should everyone try?

Definitely our pancakes and French toast, served with 100% maple syrup shipped in from Canada. I also think everyone should try our omelets and garlicky home fries. They’re delicious! And alas, our ‘amburgers aren’t so bad either, my favorite being the Super BIA (named after the diner, Breakfast in America). 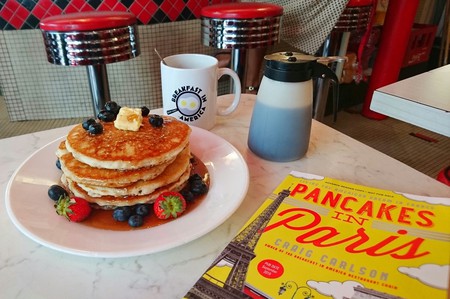 Pancakes and Pancakes in Paris │ Courtesy of Breakfast In America

Your new book, Pancakes in Paris, describes your experiences creating Breakfast in America. Had you always intended to write a book and how did you find putting it all down on paper?

The idea of writing a book only came about relatively recently. First, hardly a day goes by that I don’t have a customer ask me questions about Breakfast in America and how it came into being… so I realized there might be a strong interest in my story. And second, the idea of the book didn’t really solidify until I was lying in a hospital bed after collapsing from the stress of doing business in France. I thought to myself, ‘How ironic? For years, I’ve dreamed of living in France. And now that I’m here, I want nothing more than to escape – before it kills me!’ By writing Pancakes in Paris, I found myself falling back in love with France all over again, rediscovering what it was that brought me here in the first place. 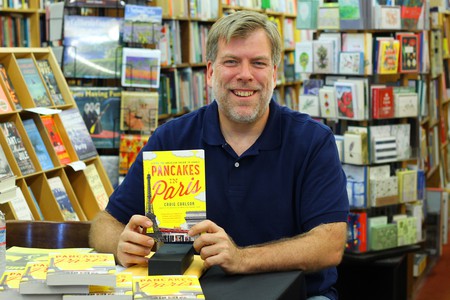 What’s next for you and the business?

My partner and I have been working on expanding the number of diners, having overseen the opening of a franchise a little over a year ago. Also, as often happens in life, events have come around full circle again and I’m now back to writing and developing screenplays, first as a writer for an animated TV series; and second, I recently optioned my book to a Hollywood director/producer who wants to turn Pancakes in Paris into a film or TV series. 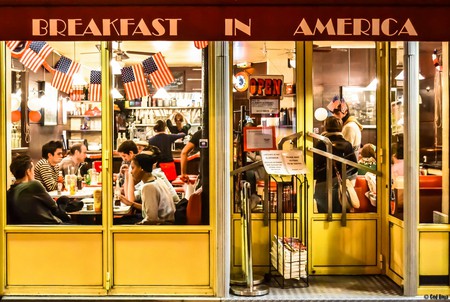 Breakfast in America 2 │ Courtesy of Breakfast In America

I have to ask, were you a big fan of the British band Supertramp and their album Breakfast in America?

Actually, I didn’t remember the album because it came out when I was a kid. That’s why when I had the idea for the name Supertramp never crossed my mind. I just wanted a name that described what my future customers would be experiencing: breakfast in America. It wasn’t until later, when I was putting my business plan together and started looking for investors that people brought up the album. This prompted me to get some legal advice, and I ended up registering the name and now own the trademark for France and the rest of Europe.

When you’re not working, what’s your favorite thing to do in Paris?

First of course, I love going out to eat in Paris! I live in the Latin Quarter and am surrounded by a bunch of fantastic French restaurants as well as cuisine from all over the world – Italian, Indian, Tibetan, Colombian, Argentinian and Moroccan, you name it. Also, like a tourist, I love wandering the streets of Paris, getting lost, discovering new neighborhoods and hidden passageways, going to museums. But above all, I love going to the old repertory cinemas I first discovered as an exchange student, many of which are in the Latin Quarter: Grand Action, Le Desperado and Action Christine. A lot of people don’t know it, but Paris is one of the only places in the world where you can regularly see old classic and foreign films in their original language – and projected from real 35mm film, not digital. It’s heaven for cinephiles like me.