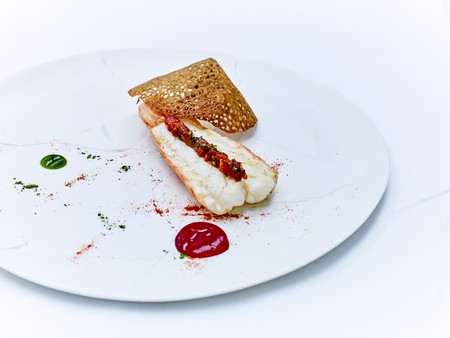 Le Cinq is a three-starred Michelin restaurant in Paris with a unique vision. In our interview with head chef Christian Le Squer, we learn about his commitment to pioneering sustainability with a passion for seasonality and small-scale artisan produce. He works with the delicacy of a diamond cutter, yet with the passion of a painter, sculpting the finest creations.

The gastronomic journey that began out at sea

Le Squer grew up surrounded by fishermen in the small fishing village of Ria d’Etel, collecting shellfish, lobster and crab for pocket money. He first decided to embark on his gastronomic adventure while cooped up on a boat at age 14, inspired by the heartwarming responsibility he felt when helping feed the crew on board.

“In France, children get a lot of holidays and since my uncle was a fisherman, it was only natural for me to spend 10 days on his boat”, Le Squer tells Culture Trip in an exclusive interview. “I didn’t want to learn how to fish, though, I wanted to learn how to cook and so, I’d stay inside with the chef. I could easily have become a sailor, but I fell in love with cooking as I came to understand how cooking can be for the benefit of others”. 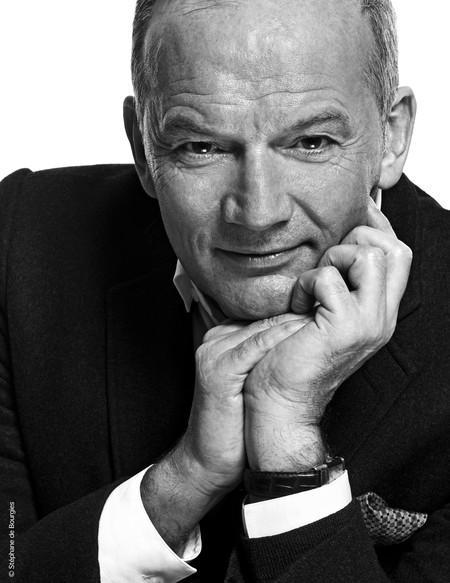 A passion for protecting the oceans

His most impressive seafood dish includes raw scallops dappled with a surprise dash of lychee, topped with a taste of the sea thanks to a slice of iced sea urchin. Elsewhere, he delights with the unusual, yet rewarding, combination of sea bass and buttermilk.

Having grown up in the tiny fishing village of Ria d’Etel, it’s only natural that his profession be infused with a passion for protecting the oceans. “I worry about the future of fish”, he admits. “I’m always asking myself how I can change my ways of working to be able to help protect the oceans. It was my childhood”.

Le Squer believes that we have no choice but to take care of nature and of course, when you’re a three-starred Michelin chef, people are more willing to listen. Along with his show of support, he is launching a Surfriders’ Ocean Initiatives project on May 26, 2018. Though, the majority of his engagement comes from the sustainable approach he applies when sourcing these gastronomic delights in the first place.

Le Squer is committed to working with small-scale food producers and can vouch for the increased quality that smaller quantities ensure. 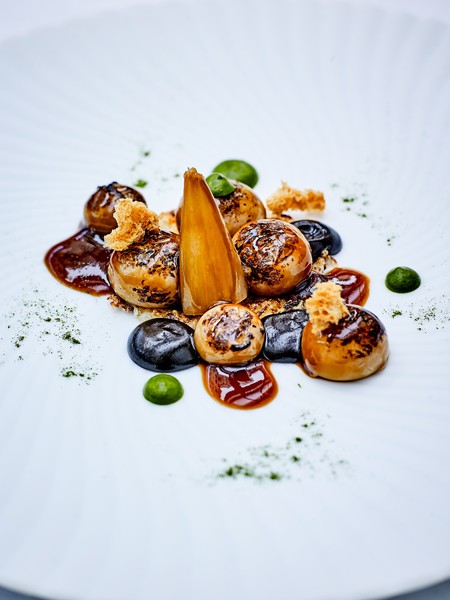 He is particularly wonder-struck by a small artisan producer who delivers a small quantity of the country’s most succulent peas to him. “You only need one bite to understand that these are the best peas you’ll ever taste. I’m not adding anything, they just taste so natural. I’m a real lover of natural flavours, which is hard to come by these days”.

The cooking process for these peas is incredibly painstaking; with heartfelt attention to detail, he categorises each pea according to size to ensure they are all cooked at the exact same rate. True to his word, these peas taste like pin-prick explosions of gently fragranced goodness. It’s exactly the standard you’d hope to taste in such palatial surrounds. 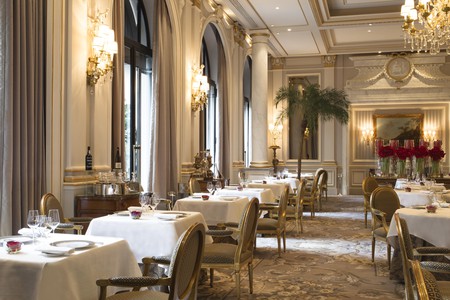 As well as the sustainable peas, Le Squer is also dedicated to using a very small Japanese vegetable company, whose artisanal practice is so refined that sometimes, they bring him just five carrots and that’s all. “We are very close to our producers. We know where every vegetable comes from and the condition in which it has been grown”.

He even suggests that the next stars of the food industry won’t be the chefs, like himself, but will be agriculturers and artisan producers who source these miracles in the first place.

The same approach applies to his seafood. Sometimes, a handful of living prawns will be delivered to him by hand, fresh after being fished straight from the sea. Not only is smaller-scale fishing better for the environment, Le Squer insists, but also far more rewarding for the palate.

“You can actually taste the difference. There is a purity of flesh when fish is caught in smaller quantities, it’s more firm in texture”. He says that industrial-scale fishing with large nets increases the stress levels to such a degree that it’s actually detrimental to the texture when cooked. 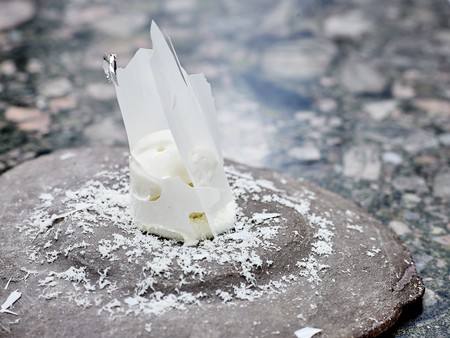 In this way, the minuscule sizing of Michelin dishes, where everything is so small, particularly the desserts, starts to make perfect sense.

A chef should work with nature and not against it

Le Squer’s passion for using small-scale artisanal produce feeds into another one of his key values, which is to appreciate the wisdom of nature. Specifically, this means respecting its patterns of seasonality.

“A chef should only work with what is given to them”, he insists. For this reason, the peas that have him wonder-struck will not be placed in the fridge before they are served, as this would contradict the temperature they have been trained to endure. “I’ve always respected nature as a golden rule since I started cooking 20 years ago”, he adds. 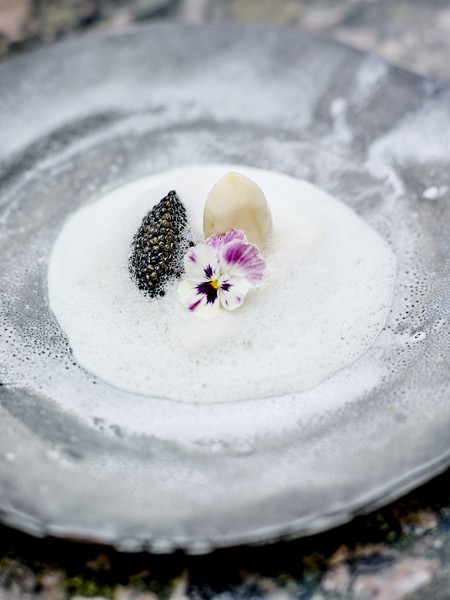 It comes as no surprise then that his approach to sauce is minimal albeit masterful. “A sauce should pay tribute to the dish and not smother it. You should let the natural taste shine through”, he says.

“It’s hard to have good ingredients, so I strive to respect the way I treat them – like a good tailor would respect his fabric”. He is also careful with the level of cooking, tampering only with a gentle touch.

But the aesthetic precision of appearance is important too

Of course, aesthetic precision rests vital to a venue used to welcoming kings and queens. “The design of the dish is very important, but it shouldn’t be complicated”, says Le Squer, contrary to wide public opinion. “It should be simple and leave all the technical aspects, the toiling of the craftsman, hidden in the kitchen. You just need to think ‘wow’, that’s simple”. 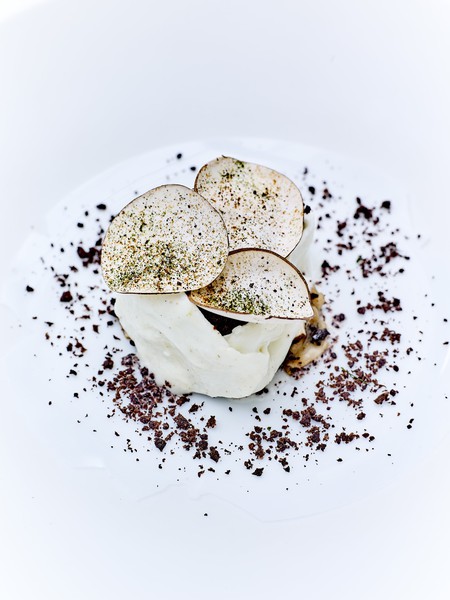 This belief often translates to a series of truly unique culinary innovations, as he is truly unafraid to break with conventions. A particular gem on his menu is the highly unusual spaghetti pie, where each strand is meticulously sculpted into a truffle-shaped masterpiece. 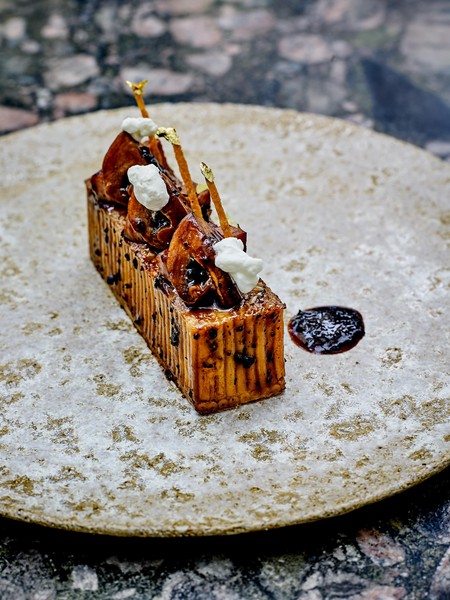 “How can I bring some magic, I ask myself? I am a magician of taste”. The final touch is to ‘bring emotion’ to the dish and Le Squer invests significant time and effort into researching the best possible combinations.

To create such gastronomic masterpieces, he works with the delicacy of a diamond cutter, yet with the passion of a painter. “People who come to eat with me seek a craftsman working in a palace. Nothing is left to chance: everything is beautiful, every single detail”. 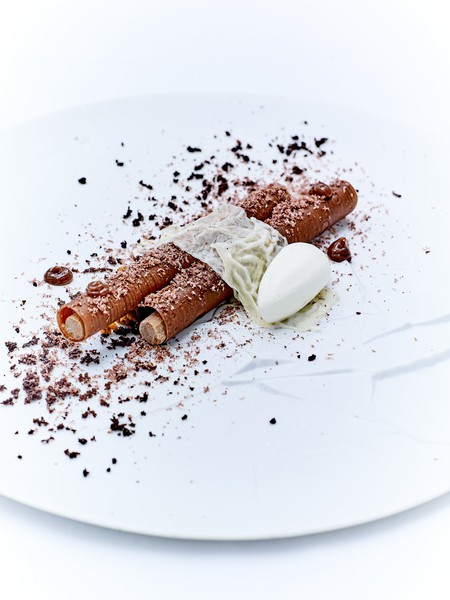 But of course, no gastronomic voyage is a smooth crossing from start to success. Like any master chef, Le Squer has faced his fair share of hurdles along the way. “You need to learn how to work as a team. It’s a discipline of learning how to share, maintaining excellence while always giving back. You also need to be curious and not fear modernity”, he advises. 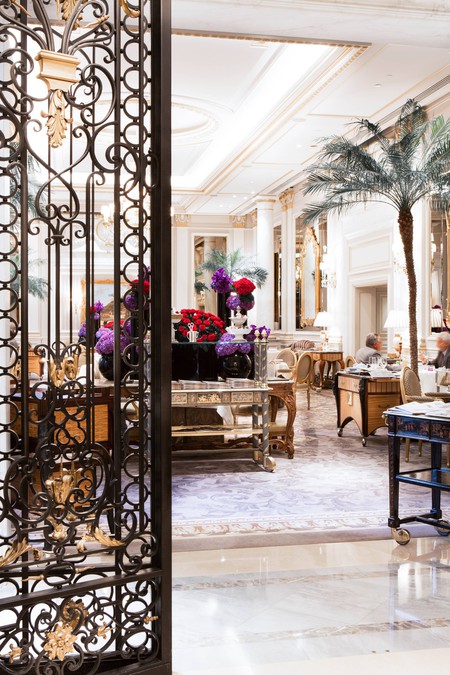 Le Squer goes on to stress the need for re-invention on a regular basis. “A three-starred chef must always be one step ahead”. In a world where progress is so fast, he says you cannot evolve without an open-mind towards change. “I am a man that likes technology. It allows us to respect the raw ingredient even more”. In spite of preferring a traditional approach to artisanal produce, he enjoys using state-of-the-art timers and cutting-edge transportation methods to ensure the food does not spoil.

Despite the lavish decor, Le Squer insists that he doesn’t work for the palace. Instead, he works first and foremost for his guests and their health. “People today want to take care of their health, it’s not just about appearance. Even school canteens are becoming more conscious about these issues”. That’s why everything he serves is to the finest culinary standards. 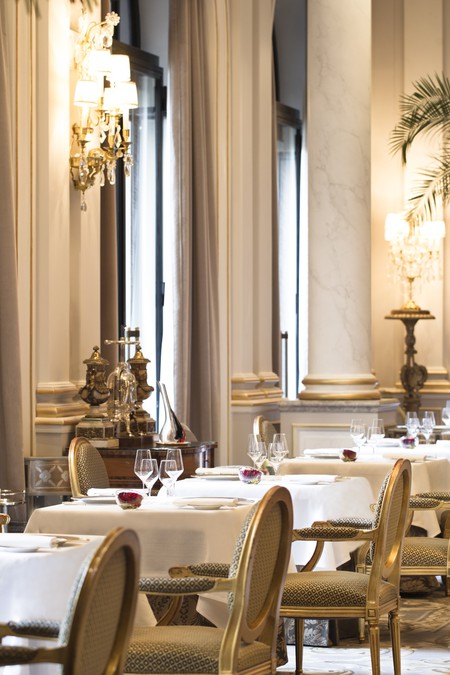 In the spotlight with such a prestigious title, he is fully aware of the responsibility that comes from being an international spokesperson. “I am responsible for evoking art de vivre in Paris, showing the best of French gastronomy and I must make the food shine through; but I wish to do so with a local and sustainable mindset,” Le Squer explains. “We sell dreams, but also well-being”.

There’s no doubt about it – Le Squer’s cuisine is revolutionary. He achieves this spectacular fusion between sustainability and luxury with breathtaking elegance. It’s also the first and finest fusion of its kind.