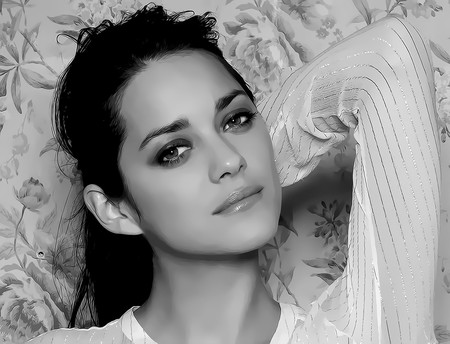 When Marion Cotillard won the Oscar for Best Actress in 2007, she became the first French artist, the second woman, and one of only six actors to have won an acting award for a part spoken in a foreign language. She has been described as ‘the silent film actress of our time’ for her ability to wordlessly portray emotions and her movies in French and English have been met with critical acclaim and commercial success. Below are her seven most brilliant performances.

Pretty Things was the second film to earn Cotillard a Most Promising Actress nomination at the César Awards, but her first in a leading role (she had only a few scenes in 1998’s Taxi for which she was also nominated). This drama from director Gilles Paquet-Brenner is based on Virginie Despentes’ 1998 novel Les Jolies Choses and sees Cotillard play twin sisters with starkly contrasting characters. Lucie is an outgoing model, and Marie is serious and shy. When Lucie commits suicide, Marie assumes her identity, leading her to revelations about both of their lives.

A Very Long Engagement brought Cotillard her first major acting award: the César for Best Supporting Actress. Jean-Pierre Jeunet’s romantic war movie, which was based on a novel of the same name by Sébastien Japrisot, was a huge international hit. The film follows its intended star, Audrey Tatou, on a quest to find her childhood sweetheart who was supposedly killed on the World War I battlefield, along with four other men accused of trying to flee the frontline. Counterpointing Tatou’s hopeful search for her lost love is Cotillard’s turn as another would-be widow, one out for cold-blooded revenge.

La Vie en Rose remains arguably the defining performance of Cotillard’s career. Her portrayal of French cultural icon Edith Piaf left audiences around the world breathless and brought the actress rave reviews and multiple awards, including the coveted hat-trick of the BAFTA, Golden Globe, and Oscar for Best Actress. Director Olivier Dahan said that he chose Cotillard for the role before they even met because of the similarity between the two women’s eyes. George Clooney chose it as his performance of the decade in a Screen Test interview with the New York Times, citing the insightful way Cotillard presented aging.

Rust and Bone helped Cotillard realize some of her most heart-wrenching on-screen moments. Jacques Audiard’s romantic drama is based on a short story collection by Craig Davidson and follows the cautiously intertwining lives of Stéphanie, a killer whale trainer involved in a horrific accident, and Ali, a cash-strapped young father and mixed martial arts fighter. The film competed for the Palme d’Or at the 2012 Cannes Film Festival, receiving a 10-minute standing ovation at its premiere, and was nominated for numerous international awards. Cotillard’s performance is at times brutal, but always mesmerizing.

Cotillard’s turn in Two Days, One Night earned her a second Best Actress nomination at the Academy Awards. Directed by the Dardenne brothers, this Belgian film is one of the finer examples of recession cinema to come out of the financial crash. Cotillard plays Sandra, the depressed heroine of this socialist epic. She faces unemployment if she cannot use what remains of the weekend to convince her colleagues to forgo their 1,000€ bonuses in favor of saving her job. Cotillard embodies a character who is learning that the will to live comes not from the succeeding but the fighting.

Taking on one of the most famous roles in stage and film, Cotillard impressed critics with her interpretation of Lady Macbeth in Justin Kurzel’s adaptation of William Shakespeare’s Scottish play. The title role is played by Michael Fassbender, and the pair, as you’d expect from their combined body of work, are an on-screen dream team. Of the two, Cotillard’s performance is perhaps the more commendable, seeing as she is able to do more with fewer lines and, as always, convey complex emotions without uttering a single word.

By the end of 2016, Cotillard will have appeared in four feature films: Xavier Dolan’s It’s Only The End of the World, Nicole Garcia’s From the Land of the Moon, Justin Kurzel’s Assassin’s Creed and Robert Zemeckis’ Allied. In the last of these, Cotillard co-stars with Brad Pitt in a romantic thriller set during World War II. The pair’s characters are based on two real-life assassins who fell in love during an assignment in North Africa. Once they return to London, it transpires that Cotillard’s French Resistance fighter Marianne Beausejour might not be exactly who she claims to be.