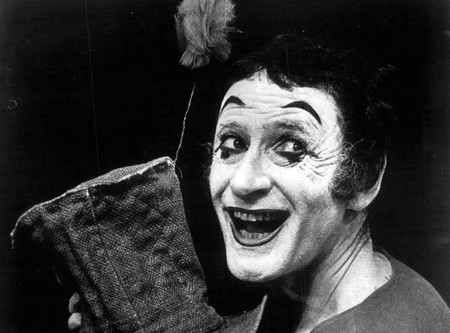 France’s most famous mime, Marcel Marceau, was the cultural ambassador of the, “art of silence”, reviving the art of mime after WWII. Famous for his silent portrayals of everyday life, Marceau mastered comedy through the simplest form of expression and rapidly became the world’s most beloved mime. Discover the life of the acclaimed “poet laureat of silence.”

“Do not the most moving moments of our lives find us without words?” – Marcel Marceau

Marcel was born in 1922 in Strasbourg, France, into a Jewish family and was the eldest of two sons. When France entered World War II, his family was forced to flee to Limoges for protection, where both Marcel and his brother, Alain changed their last name from Mangel to ‘Marceau’. Sadly, Marcel’s father was arrested and deported to Auschwitz, where he died. During the German occupation, Alain and Marcel joined the French Resistance, where he gave his first important performance to 3000 troops after Paris was liberated in August 1944. After the liberation of Paris, the two brothers joined the French army, where Marcel became a key-figure – due to his mastery of German, French and English – and quickly became General George Patton’s right-hand officer.

Marcel’s wish to become an actor had been sparked during childhood when he saw Charlie Chaplin on the big screen. Therefore, when the war ended, he enrolled in the school of dramatic art in Paris, where he was taught by the greatest masters of the time, including , Jean-Louis Barrault. After graduating, Marceau was invited to join Barrault’s company and was cast to play the role of Arlequin in the pantomime, Baptiste; Marcel’s performance was a true success and he was quickly encouraged to stage his first mime-drama at the Bernhardt Theater. This was the performance that sealed his talent and recognition as a future star. His career was ready to take off.

In 1947, Marceau created his most famous and internationally known character, Bip. Bip was a clown dressed in a marinière (marine-like, striped shirt), wearing an old, silk hat with a flower attached – the flower, Marcel later explained, represented the beauty and the fragility of life. Bip’s misadventures went from butterflies to lions, from ships and trains, and restaurants. Bip captivated his audience through his vivid charisma and the assertiveness of his parody in these everyday life scenes – situations that in the end, everyone identified with.

Several of his mime-acts, such as, The Cage, Le Petit Café Parisien, The Lion Tamer, The Mask Maker, and The Bird Keeper, became all-time-classics and were often referred to as works of genius, gaining Marceau world recognition. We take a look at some of Marcel Marceau’s most memorable performances: