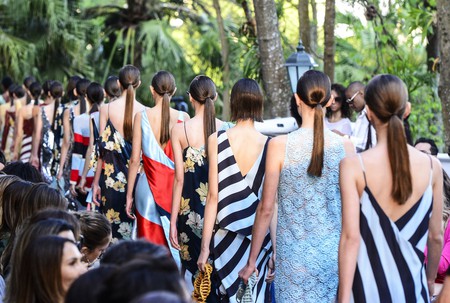 Luxury fashion houses Kering and LVMH have today issued a ban on super skinny models (French size 32, US size 0, UK size 4), and have also announced that they will no longer use models under the age of 16 to showcase adult clothes.

The announcement comes ahead of Paris Fashion Week at the end of September, and follows a ban on underweight models in May, with companies now facing fines of up to €75,000 if they don’t comply with the new regulations.

The move comes after a furore at Paris Fashion Week in March, in which it was revealed that major casting agents left young models waiting in rooms for hours while they ate their lunch, with other reports suggesting endemic racism amongst many of the major houses. The Guardian quoted casting director James Scully as saying “I have heard from several agents, some of whom are black, that they have received (a) mandate from Lanvin that they do not want to be presented with women of colour.” Scully also called out the fashion industry for systematic mistreatment of young women at the BoF’s VOICES conference in December 2016.

Having major houses support healthy models can only help to change the narrative around beauty ideals, and will remove pressure on those coming up through the modelling ranks to push their body to unhealthy extremes.

As a bastion of ‘old school’ fashion, French luxury brands have always had a responsibility to lead by example; this change follows on from the likes of Dior and Louis Vuitton adopting a more versatile and empowered aesthetic in general. Marie Grazie Chiuri’s first collection for Dior featured feminist slogan t-shirts, while Lea Seydoux was chosen to be the face of Louis Vuitton this year.

These developments reflect the evolution of the beauty ideal in fashion, which has seen a radical shift away from the ’90s ideals of supermodels towards unique, diverse and unconventional-looking beauty. The new era has seen the rise of exciting new models such as Adwoa Aboah, Slick Woods and Hari Nef, amongst many more.

While the decision by Kering and LVMH might not radically impact the fashion industry overnight, all eyes will certainly be on Paris this fashion month to see where the evolution is going.