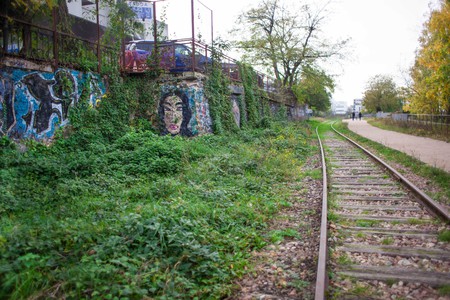 Anastasia Bow-Bertrand explores the past, present and future of the near-forgotten railroad La Petite Ceinture, Paris. Dating from the nineteenth century, its original commercial transportation uses were abandoned, and an underground culture and environmental treasure took their place. But this is all about to change again. 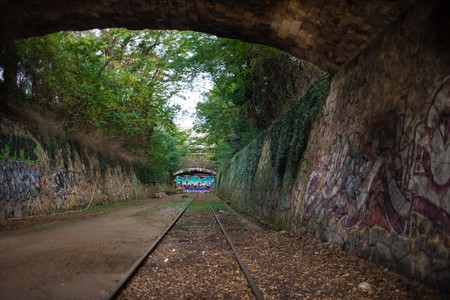 The ‘shall they return to beatings of great bells / In wild trainloads?’ strain of Wilfred Owen’s The Send-Off floats into consciousness as one contemplates the history and purposes of the Chemin de fer de Petite Ceinture. Translated as The Little Belt, this now abandoned railway line encircles the Boulevards des Maréchaux and the city walls of Paris as they stood during the reign of Napoleon III. For those more familiar with the current Métro, this is approximately the loop of lines 2 and 6. This was also the era of Georges-Eugène Haussmann (the civic planner said to have changed the very shape of Parisian streets), and the Petite Ceinture, built at intervals between 1852 and 1869, similarly transformed the potential for goods and citizen transportation at the time, by linking the major stations of the five core railway companies in a 32 km long thread. 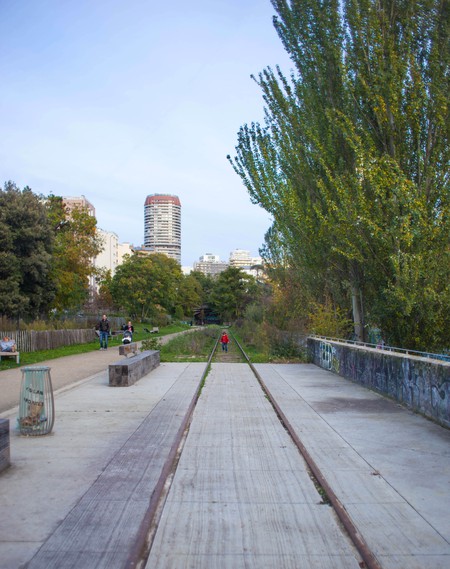 To an impercipient visitor, the original purposes underlying its construction remain obscured by the brambles that blur the lines at regular points along the tracks. However, Owen’s military musings resonate with initial motivations to create a means of rapidly transferring troops from point to point across the city, as a defensive strategy. Since this earliest function, the Petite Ceinture has come to grow and sustain the transport of material goods from depot yards to the core of Paris, ultimately becoming an invaluable urban passenger service at the height of its use. Now, observing a line that has witnessed the decay of 79 years since its closure to the public in 1934, it is near impossible to imagine steam trains charging in each direction six times per hour.

The Métro was the central factor in the outdating of the Petite Ceinture. Even freight train provisions had dwindled to none by the mid-1980s. Nevertheless, much as Haussmann is influential for changing the boulevards of Paris, this railway line shaped the development of the peripheral districts of the French capital. Indeed, a railway is a journey in itself, not merely a means to a destination. The Petite Ceinture’s lingering presence continues to influence the lives of many Parisians, albeit the minority who recall its existence and care for its fate. At present, the Société Nationale des Chemins de fer Français (SNCF) retains ownership of the vast majority of the line, which technically remains functional in the eastern bands stretching between Gare de Bercy and Gare de Nord. As a result, the remaining sections are off-limits to the public. 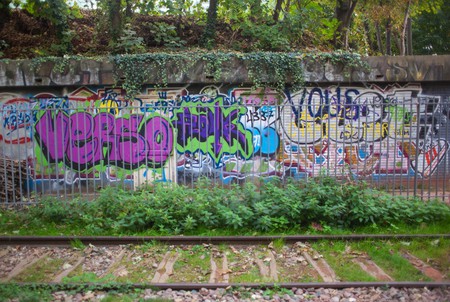 For children and adults alike, the forbidden tempts with the promise of rebellion and adventure. Inevitably, the Petite Ceinture has attracted an eclectic undercurrent of trespassers, from activists, artists, historians, local residents, to the schoolchildren who slip onto the tracks to se balader (‘wander around’). The lure of Paris’s catacombs physically overlaps that of the railway; the most accessible entrance to these underground tunnels being via one of the 17 abandoned railway stations. Our exploration, ironically enough, finds us arriving via the Métro at Gambetta station, in the heart of the village of Charonne in the 11th arondissement. Immediately, one is struck by a sense of depth. Above the streets, bridges cross like balconies, and houses cling to the sides of suburban slopes. This is typical Petite Ceinture territory. So often forgotten because of its ‘other worldliness’, the omnipresent tracks weave their way through a network of tunnels, slice through deserted goods yards, and rise through elevated terrain above the watching windows of terraced houses.

The sight of two students straddling a lamp post to access the railway is clearly an ordinary occurrence here, as locals passed by unconcerned, until a tip-off revealed an easy access point nearby (albeit involving a scramble up a former playground wall). From those first, bewildered steps onto the rotting wooden sleepers and tracks glistening umber in the dew, the overbearing atmosphere of nature’s supremacy soon becomes evident. The line itself is cloaked in grasses and old man’s beard, stretching out like a green ladder in the remote segments furthest from the invasive, bustling presence of Charonne life. To each side, marrow plants and saplings framed the tracks while soil was mounded into graves, presumably covering sleeping vegetables rather than bodies. This is the character of the Petite Ceinture – simultaneously rural and semi-civilised. The graffiti artists that have covered the walls and many derelict signalling posts along this part, work out of the desire to create. 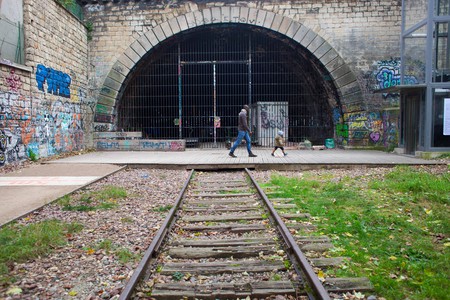 These artists have the same motivation for being and creating there as the photographers; and even the two 15-year old locals who had come to smoke marijuana are there for that same reason: there is a magnetic mystery to this place. ‘Magic’ is the wrong word, for this railway line is a hub of underground culture, as well as the garden of nature, showcasing the best of its animals, flora and fauna, preserved from the ravages of development and technology. Its stirring force of potentiality overrules the sadness of seeing squatter’s dwellings fashioned out of corrugated iron sheets, dumped gas canisters, and broken terrace chairs. Where a railway has been lost, a place of immeasurable calm and harmony away from the real Paris has descended. ‘Surreal’ is the most apt description for the emotions felt on climbing away from the tracks. 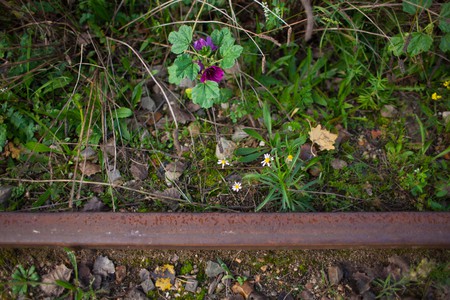 For those who wish to explore the line without having to leave by hopping onto the roof of a Citroën, or entering tunnels of indefinite length, there are several recently developed initiatives that have attempted to integrate the line with its local environment. In the vein of New York’s High Line and Paris’s established Promenade plantée, the opening of a freely accessible walk between Balard and Rue Olivier de Serres offers a taste of the Petite Ceinture, although it is a clinical one, involving abiding by park opening times, and using lifts and stairs. Other ventures include the restoration of the railroad stations into restaurants and venues, such as the alternative music hall La Flèche d’Or, despite its disintegrating back-end when observed from the railway track itself. Cracked windows, sparse roof tiling and rusting gates are somehow permissible in this derelict world.

However, the fate of la Petite Ceinture is not as disregarded as one might imagine. The Association pour la Sauvegarde de la Petite Ceinture et de son Réseau Ferré (ASPCRF) is the pivotal organisation behind the preservation of the railroad, primarily seeking the restoration of the passenger service. Their work frequently engages with councils and residents whose aims range from demolition, to landscaping the line into an ecological haven. Whether the ‘wild trainloads’ ever return to this route is still very much in debate. What is certain, is that change is imminent, and the romance of abandonment cannot, and will not, last forever.