Inside the French Presidential Celebration at the Louvre

I wonder if this is what it might have been like had Hillary Clinton won November’s U.S. presidential election? Would I too have been gathered with New Yorkers—far and wide—in Union Square, our voices joined in anthem to usher in a new era? The thought comes to me now as I stand among thousands of Parisians gathered at the Louvre to celebrate the election of President Emmanuel Macron.

A sea of red, white and blue flags wave exuberantly in front of the famed glass pyramid, as the historic Louvre—a witness to so much history here—surrounds us. Behind, the Eiffel Tower glows, glittering on the hour, every hour, as the crowed waits for President Macron to take the stage.

The election of Emmanuel Macron is no ordinary win. The 39-year-old candidate and head of the Socialist party had the odds stacked against him from the beginning, while the election itself held the attention of the world for weeks. Macron’s opponent, far-right nationalist Marine Le Pen, would have been disastrous for France. Her campaign promised to initiate ‘Frexit’—an exit of France from the European Union—as well as take anti-immigration measures. Le Pen ran on a platform of xenophobia, which gathered support following last year’s terrorist attacks in Nice and Paris. 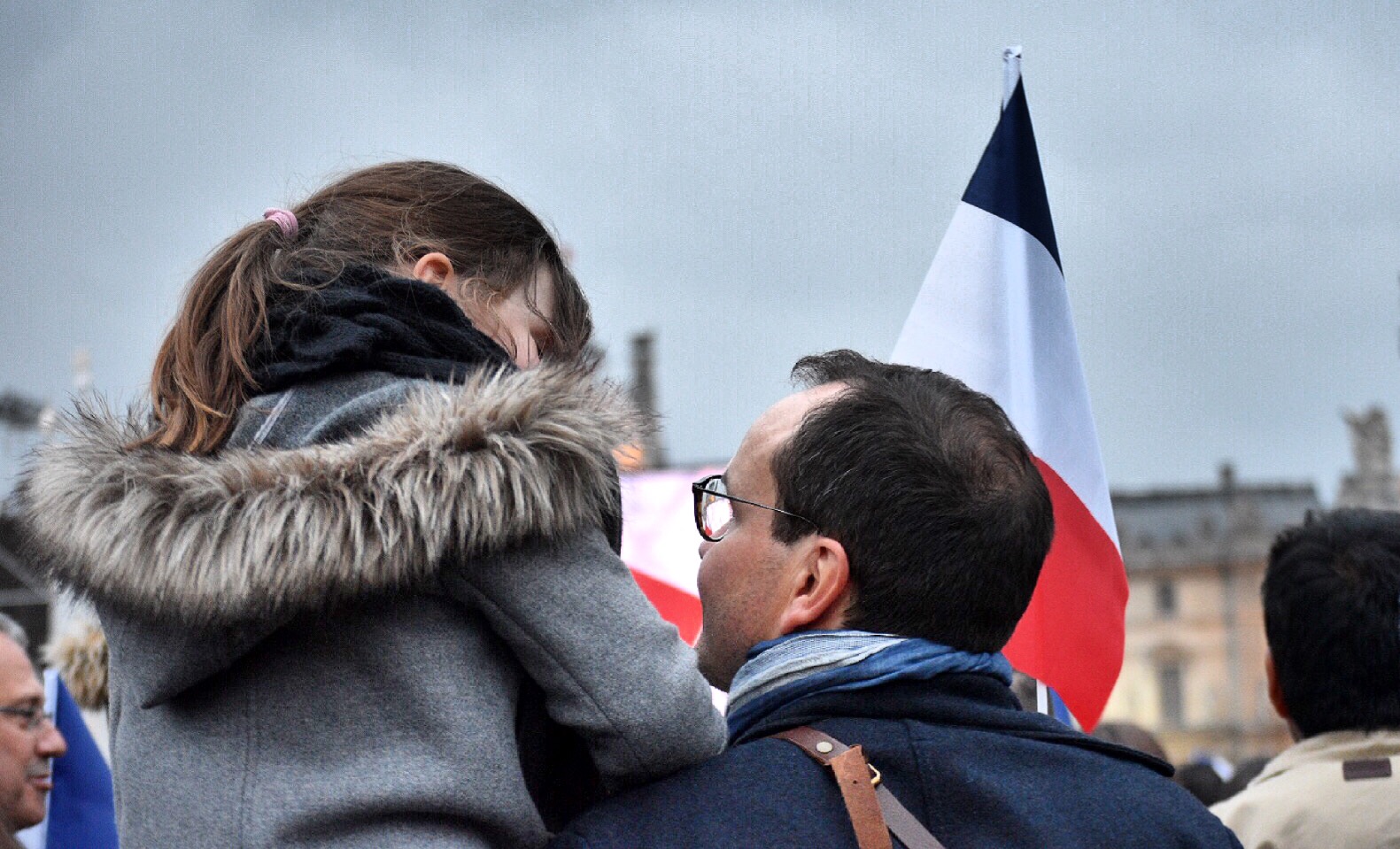 A father and daughter | © Nikki Vargas

Winning the election by 65%, Macron’s rally filled every corner of the Louvre as a DJ spun hits from Rihanna and Sia, whipping the crowd into a frenzy of patriotism and jubilee. Sunday’s French presidential election was similar to the United States election, in that one under-qualified candidate with extremist views threatened the very principles of the country and its democracy. Unlike the States though, hate lost on Sunday night in France as acceptance, perseverance and that oh-so-French ideal of love reigned supreme.

Upon his arrival, Macron marched solo across the courtyard of the Palais du Louvre to a stage set up in front of the glass pyramid. The tune of Beethoven’s ‘Ode to Joy’, the EU anthem, symbolically played as the crowd’s deafening cheers filled the air. 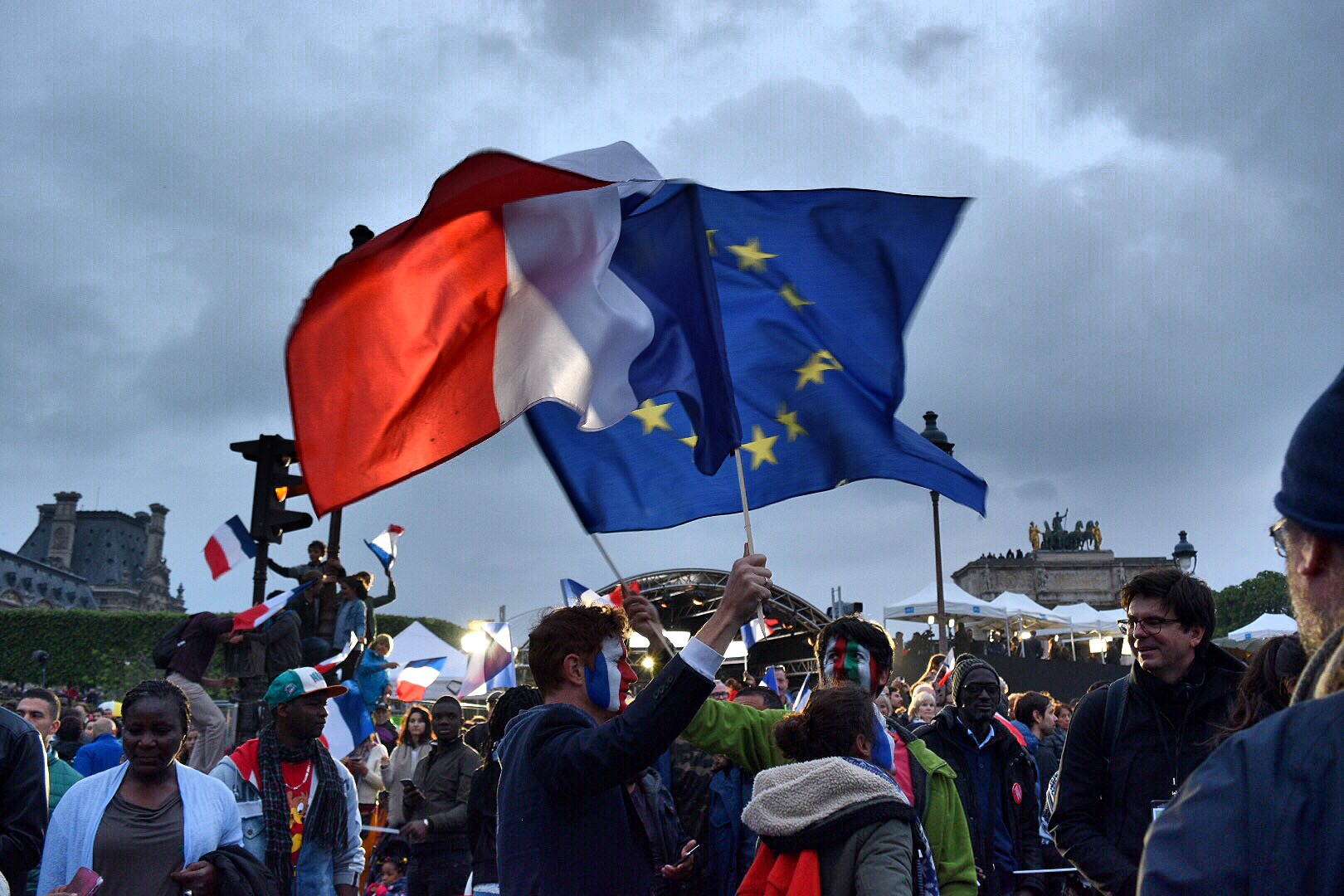 Macron then acknowledged those who supported him. “I want also this evening to say a word for those French people who voted for me. You committed and I know that it’s not that simple. I want to say something to those French people who voted simply to defend the Republic, confronted by extremism. I understand our divergences and I will respect them, and I will be faithful to this commitment I undertake to defend the Republic.”

Macron then spoke to the French who cast their vote for Marine Le Pen, urging the crowd not to boo in response. “I also want to say a word for those who voted today for Madame Le Pen. They expressed today anger, dismay and sometimes convictions. I respect them and I will do everything during the five years to come to make sure that there is no reason at all to vote for extremism.”

Despite the joy of his win, the task in front of France’s new president is immense. Macron is confronted with tackling soaring unemployment rates, rising levels of xenophobia, threats of terrorism and—perhaps the most daunting of obstacles—mending the deep divides amongst the French people.

Looking confidently out onto a sea of French flags waving in the Palais du Louvre courtyard, Macron spoke to the world. “They are expecting that—once again—France will amaze them, and that is precisely what we will do.”