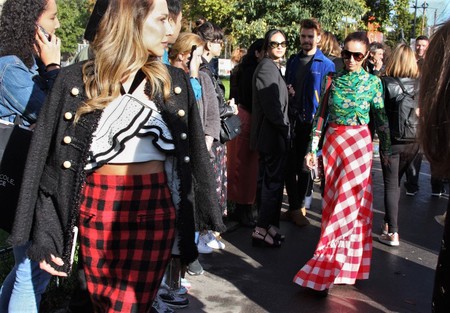 It’s a funny time for French fashion, as the city with the most traditional legacy finds itself facing disruption at every turn: male creative directors are being replaced, social media is putting demands on craftsmanship and Macron has arrived with sweeping reforms. But on the streets of Paris SS18, the biggest change is afoot: women are claiming a right to feed into the creative process, and own how they dress. Culture Trip looks at the subtle power shifts happening outside of the catwalk.

Here’s the longstanding dichotomy: catwalks offer the big idea, starting with couture (and some RTW too), creative directors offer a vision of the kind of woman they think the world wants and, with it, sell a message about their brand. Sometimes this means must-have items, such as Yves Saint Laurent’s and Chanel’s glitter boots, and sometimes this means a certain way of styling a familiar piece – like Balenciaga’s suggestions that two coats are better than one. Meanwhile, consumers looking at the clothes on the catwalk – and the women who model them – see nothing relatable or practical, and find themselves channelling an interpretation of the look, often with cheap reproductions in lieu of the exorbitant original. The tensions between what happens on the stage and what happens in real life often leads to the usual flurry of fashion dissenters proclaiming it a preposterous and vacuous medium. 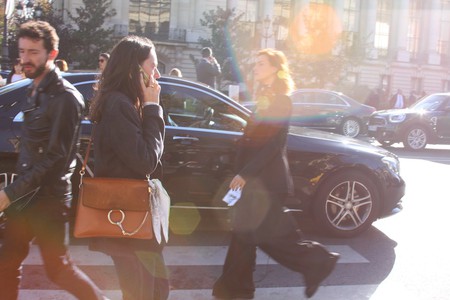 But leaving the age-old argument around ‘fashion as art’ to one side, there’s an interesting tension within the industry itself too considering, historically, creative directors at leading fashion houses in France have been men. As a quick recap, Karl Lagerfeld leads Chanel, Nicholas Ghesquierie oversees Louis Vuitton, Anthony Vaccarello has taken over the reigns at Yves Saint Laurent, Olivier Rousteing is king at Balmain and Vetement’s Demna Gvasalia is generating mass hype at Balenciaga. Until very recently Raf Simons helmed Dior and Riccardo Tisci led Givenchy. It doesn’t take a genius to work out that having a bunch of males projecting and curating what and how women should look like is problematic: tight skirts, corsets and tottering heels have rendered women semi-immobile in various domestic settings throughout history. 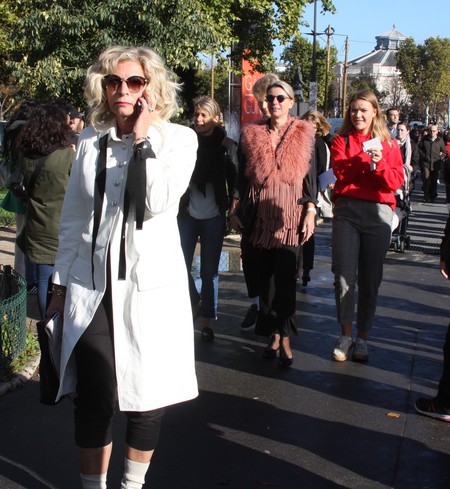 However, recent seasons have seen key shifts at top-level positions, rendering French fashion a more equal playing field: Clare Waight Keller took over at Givenchy, Natacha Ramsay-Levi assumed the reins at Chloé and Maria Grazia Chiuri left her creative partner at Valentino and embraced a solo career at Dior. They join long-standing designers Sarah Burton (Alexander McQueen), Stella McCartney (Stella McCartney), Agnès B (Agnès B) and Phoebe Philo (Céline). But does this mean change for the women who end up wearing the clothes?

Interestingly, yes. These creative designers are taking their lead as much from the consumers as from their own research – a move which has proved divisive amongst critics in the case of Maria Grazia Chiuri. The past seasons at Dior have seen Chiuri offer feminist t-shirts with slogans such as ‘we should all be feminists’ and ‘why have there been no great women artists’ along with glittery berets and tulle tutu-esque skirts. A recent Business of Fashion article cited scathing comments from The New York Times fashion critic Vanessa Friedman and critic Cathy Horyn, both of whom took umbrage with Chiuri’s pandering towards millennials, in spite of €1 billion in profits this year.

Phoebe, Stella and Agnès, it’s worth pointing out, offer far more timeless collections, which dip more into mood than moment – a move which, in itself and along with the designs of the clothes (soft, laid back, easy-to-wear and beautiful), acknowledges what women are looking for from them, as well as developing a clear aesthetic. 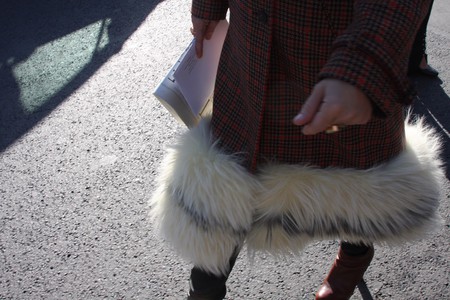 The BoF article uses this disparity to highlight the growing chasm between runway and consumer, which is true. But this gap opens up a new, powerful space: the street. During fashion week, street style clearly showed the viable marriage of artistry and wearability – a place outside of traditional catwalks to own identity in a more meaningful way. This isn’t about fashion it’s about taking hold of the narrative, and the women of Paris are doing it well.

In the French capital, self expression was evident during the SS18 shows. Perhaps it’s the decadent architecture and majestic surroundings that demand it but, in Paris, a sense of care and precision in the way in which people dress is tangible. Here a legion of women unabashedly promote ‘looks’, owning fashion pieces for everyday purposes. They translate catwalk into the theatre of their own personal domain. This marks a sharp shift away from old ideas of ‘French chic’, which played more heavily on understated, unfussy outfits. 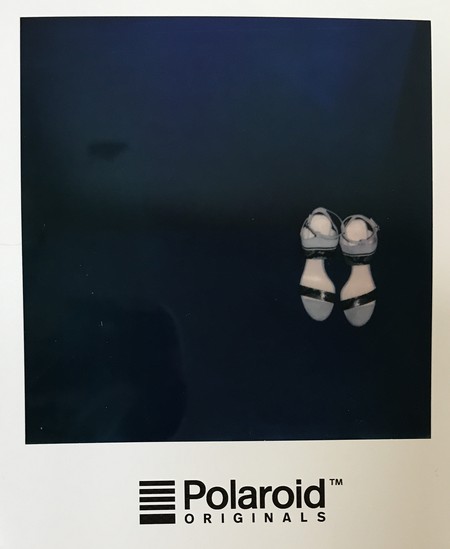 Key unifying elements of style this season – including bright colours, oversized blazers and frilled shirts alongside gingham and tweed rendered in jackets, skirts and trenches – were served tied at the waist with a dash of J.W.Anderson lining. Meanwhile, baggy jumpers were paired with new balances and trousers were worn high and wide, slouching around the foot – all styled with sharply pointed boots that came in patent reds, violent blues and, of course, glitter. In short, it was a new kind of power dressing that promoted the idea of taking up space, getting noticed and feeling empowered: it’s about enjoying clothes and femininity without apologising. It’s style that’s brave, assertive and confident – French chic re-imagined, leading the next frontier. 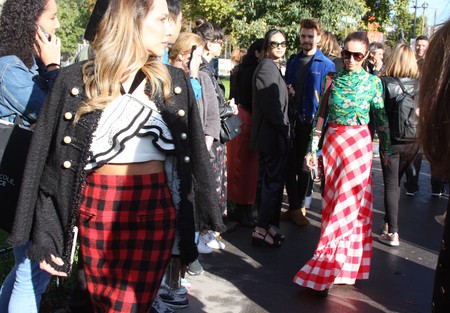 In a recent review in The New York Times, Vanessa Friedman asked of the Chanel SS18 show: ‘Is this the grossest expression of fashion’s self-involvement, or a genuine moment of escapism, proffered by one who can? Is it an example of extreme bombast or generosity?’. The Times’ Fashion Director landed on the latter, citing the move of fashion to celebrate beauty in moments of horror. In truth, Friedman let fashion get away too lightly, for if Lagerfeld was truly preoccupied with disseminating beauty amongst a city that has suffered vast trauma he would do it in an open setting, not only to a select group of invitees, blocking out Parisians with the help of a hundred policeman. 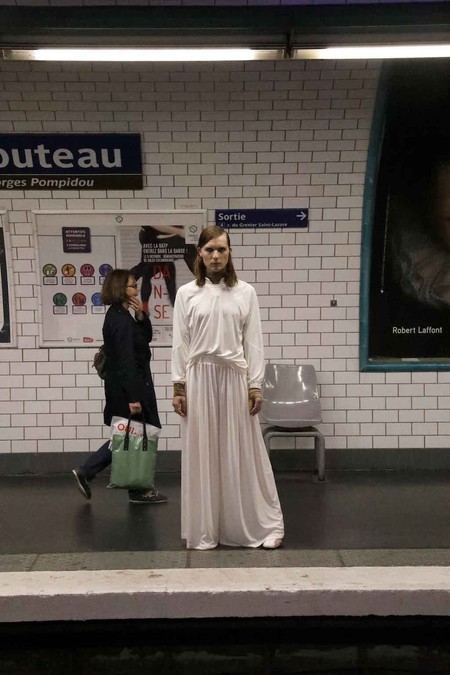 The streets, though, are a democratic space. Outside of the Chanel show, the fashion rendered passers-by immobile. At Carven, the show was set in a university during school hours, which led to clusters of perplexed and amused onlookers as a band of brightly dressed guests skulked through the concrete halls. Emerging designers such as Dumitrascu even played directly with these tensions, staging a guerilla show in the Paris metro: it was art-as-life and life-as-art all blurred gloriously into one smush. These juxtapositions of everyday life and high fashion spliced together creates something more powerful, and much more akin to joy. How can a pair of red, high, patent boots that catch your eye as you leave a boring lecture not distract you, even for a second? 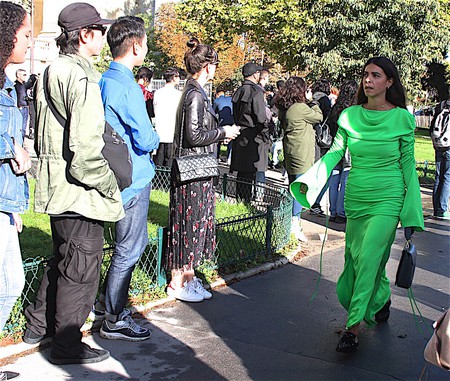 In short, the women of Paris are harnessing the right to make a splash – and enjoy themselves in the process. In turn, this offers spectacle and escapism within the everyday for the women who wear the clothes, and for those who witness it.

By owning creativity outside of the catwalks, these women take the final decisions away from designers and, instead, render it a more cyclical process – they are the leaders that designers should get behind, rather than dictate to. It’s joyful and empowering, escapist and real. That’s the kind of new identity we should all celebrate.