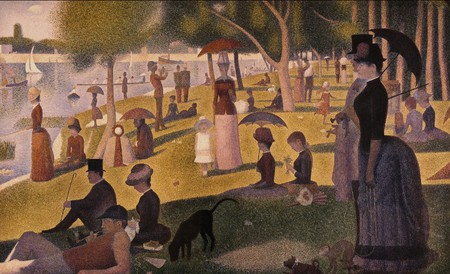 It’s no secret that Neuilly-sur-Seine and Levallois-Perret are among Paris’ most desirable suburbs, but you may not have heard of the Île de la Jatte, their exclusive island playground. It has, however, been hiding in plain sight as the subject of Georges Seurat’s famous pointillist painting and the Stephen Sondheim musical this work inspired, Sunday in the Park with George. It comprises two kilometers of restaurants, bars, gardens and sports grounds and the best way to get a feel for the French Riviera without breaking the bank or even leaving Île-de-France.

Louis-Philippe, King of the French, bought the island along with the Château de Neuilly in 1818 and transformed it into a park for his ten children. On it, he installed the Grecian Temple de l’Amour which you can check out today in its new position at the southern tip of the island. There are incredible views all along the island, and from its bridges, of the skyscrapers which make up La Défense, Paris’ business district. You can also follow in the footsteps of Claude Monet, Vincent van Gogh, and Alfred Sisley and see the riverside scenes they painted with such passion.

A large portion of the island is dedicated to physical activity, with tennis – and basketball courts, rowing pontoons, ping pong tables, a climbing wall, a driving range, and a stadium with a running track, and football – and rugby pitches. It’s no wonder that its 4,000 residents are in such good shape! If you prefer the outdoors’ more leisurely pursuits, you might want to pay a visit to the Maison de la Pêche et de la Nature, a center specialized in conserving and educating the public about all things fishy, offering a museum, aquarium and angling courses. More relaxing still is an afternoon spent in the Parc de l’Île de la Jatte, watching the expensive puppies gamboling in the grass or feeding the swans at the riverbank.

Where can you eat and drink?

For a neighborhood that’s only 200 meters across, at its widest, there is no shortage of places to relax with a refreshing drink and a mouthwatering plate of food. The Café la Jatte, which is both an Italian restaurant and a dedicated pizzeria, offers service from brunch on the veranda all the way through to cocktails at the bar under the unbelievable suspended plesiosaur skeleton. Everything is elegant and smoothly done at Le Petit Poulet, from the paneled walls and parquet flooring, to the contemporary French cuisine. Les Pieds dans l’Eau has a (highly sophisticated) family feel, with antique furniture and roaring fireplace inside, and a leafy terrace outside. You can also get even closer to the water with a lunch or dinner at La Guinguette de Neuilly, a traditional barge.

Though the owners of the penthouse apartments and riverfront townhouse might beg to differ, the island’s most valuable assets are its 1.2 million bees. They live in 22 colorfully painted hives and produce over 2,000 jars of bright, golden and lavender-accented honey every year.