At Legay Choc, a Parisian boulangerie in the heart of the Marais, things lean a little differently than at a traditional French bread bakery. Instead of simply moulding dough into the expected baguette shape, owner Richard Legay creates a penis-shaped baguette, cheekily referred to as la baguette magique (literally ‘magic wand’). 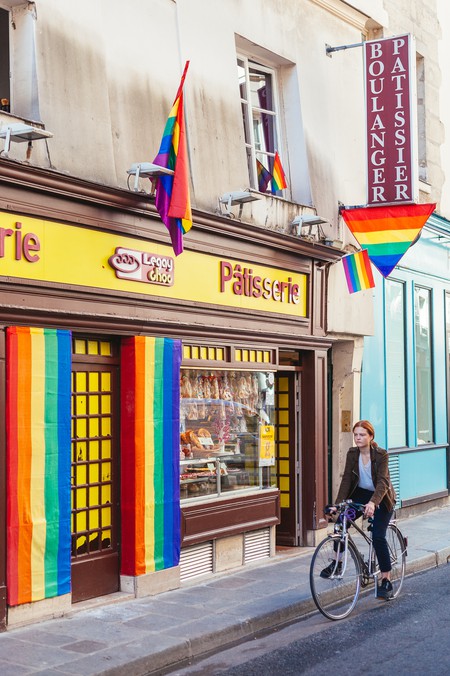 In movies, Paris is often evoked through images of velvet berets, wheels of cheese, snooty locals and a baguette sailing past under the arm of a bicyclist. Stereotypes, right? Yet baguettes really are as plentiful in Paris as the films would have you believe: after all, boulangeries are strung throughout Paris like the city’s metro stations – each flush with bakers, their aprons smeared with flour, sliding shelves of bread into cavernous ovens. 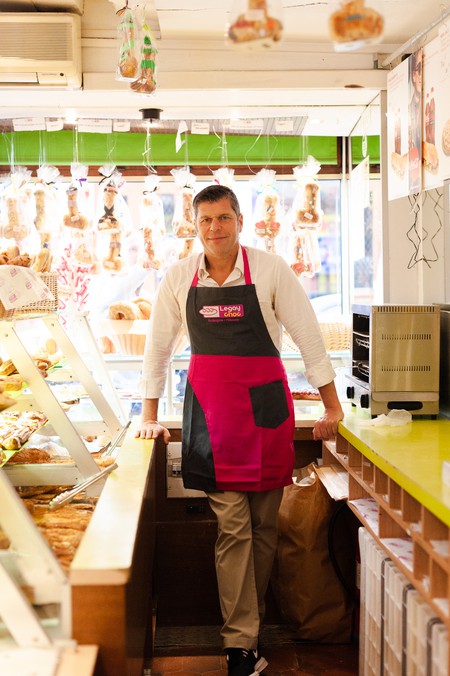 But at boulangerie Legay Choc in Paris, owner Richard Legay infuses something extra into all his creations.

No one makes la baguette magique like Legay Choc

At Legay Choc, bakers work away in the kitchen, rolling out long batons of dough, pressing two balls at one end and showering the raw dough with a smattering of poppyseeds to make Legay’s famed baguette magique. 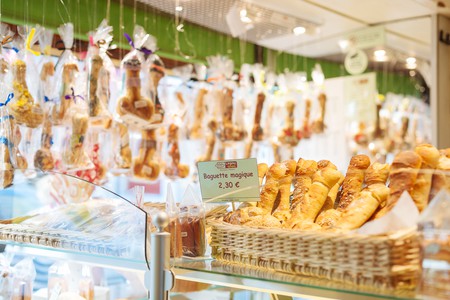 “I am the only baker of Paris and France to create la baguette magique in the shape of a penis,” Legay says. “The speciality of our bakery is that … we make traditional French baguettes, and with this traditional baguette we decided to alter it by making it a bit fun, a bit naughty.”

Each baguette is crusty on the outside – a pattern of diagonal scores gracing the top – yet soft and plush on the inside. Shape aside, it remains a perfect vehicle for a swipe of butter or jam, a classic accompaniment to wedges of sharp cheese and tart olives, or simply enjoyed as is. 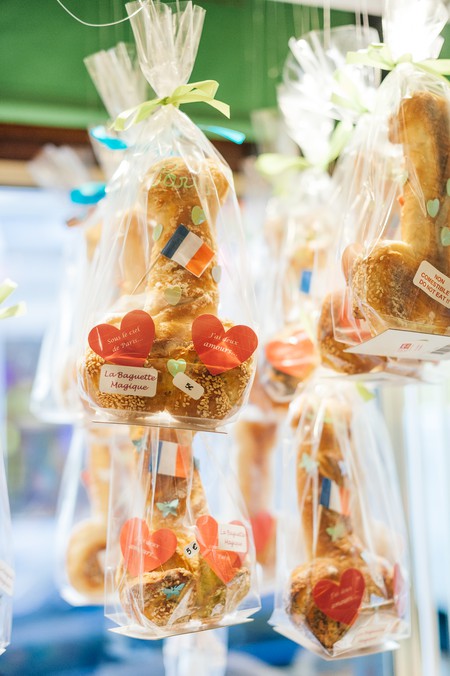 “Every boulangerie in Paris has its speciality,” Legay says, “but there is only one like Legay Choc.”

The origin of Legay Choc

Legay, who comes from a long lineage of bakers, never wanted to enter the profession. He grew up in boulangeries, witnessing firsthand how time-consuming and difficult it is to run a food business. Legay’s father operated a boulangerie in Nantes (a city west of Paris), next door to an army base. There, he often received humorous requests from soldiers to make risqué baguettes. It became a running joke in the Legay family.

“One day my brother asked me to create an original bakery with very kinky products,” Legay says. “And I said to him: ‘It is very hard to do this in Nantes. If we do this, let’s do it in Paris.’” 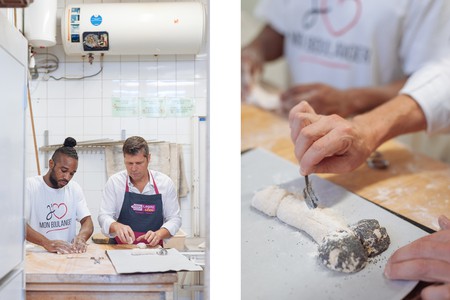 So Legay and his brother together launched their undeniably avant-garde boulangerie, stationing it along a narrow street in the Marais, a historically gay neighborhood in Paris. Parisians and tourists alike flock to the bakery, seeking out the brazen bread. They unabashedly exit the bakery, ripping off hunks of the bread as they head on their way.

“Foreigners think that Parisians are really boring, too serious and stuck up, but that is absolutely not the case,” Legay says. “Parisians are not like this. If they were like this, I don’t think I would be selling as many baguettes magiques as I do.” 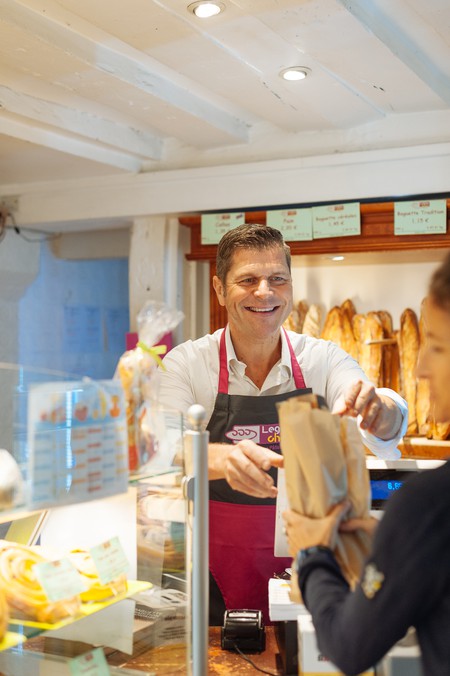 Along with la baguette magique, Legay Choc also offers other phallic pastries such as raspberry-crowned tarts, chocolate-chip-studded brioche and even a galette des rois in January.

Although there’s certainly no wrong way to eat a baguette, Legay recommends that to properly attack la baguette magique, diners should softly tear off the balls, delicately dip each one into a mug of black coffee to soak up extra flavour, then take a hefty bite. He maintains that it’s necessary to savour each mouthful, returning to the loaf to repeat these steps until only crumbs remain. 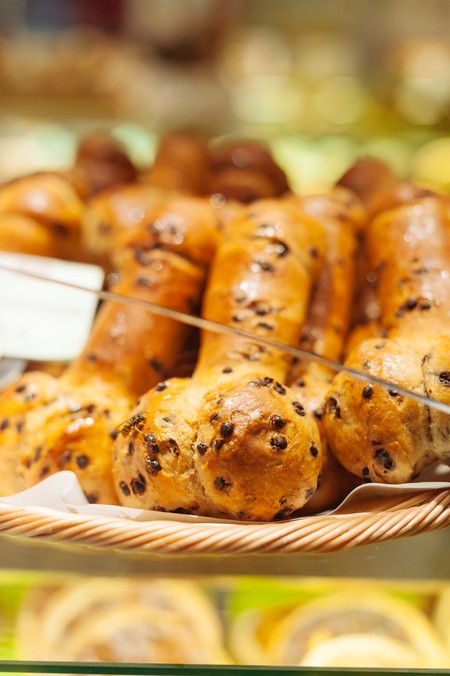 Gay pride is at the heart of Legay Choc

For Legay, his boulangerie is more than just a cheeky place for locals to purchase bread. It’s an opportunity to express who he really is. “Opening this bakery, the gay bakery, helped me come out to everyone around me, my family … the fact that I’m gay,” he says. The bakery is certainly brimming with gay pride, from the floor-to-ceiling rainbow flags fluttering outside to the gay community who frequent the bakery.

“Baguettes and pastry are a staple of Paris,” Legay says. “Bread has the power to bring people together, no matter their background, and boulangeries are the hub of every community. Bread is magic, penis-shaped or not.” 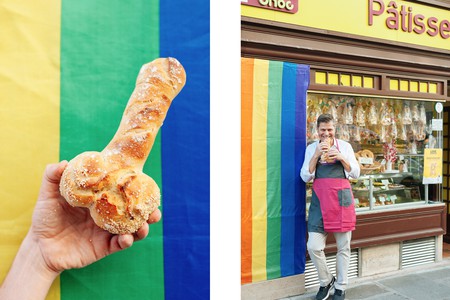