How to Celebrate Bastille Day in Paris 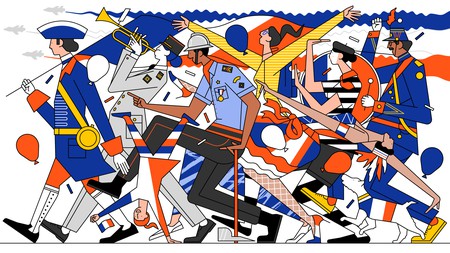 Paris’s Bastille Day is celebrated on July 14th and marks the birth of the French Republic. It’s the most important French national holiday, so the capital rightly explodes in celebration. From raucous street parties to parading brass bands, and from mesmerising fireworks to fighter pilots, July 14 is bursting with fun. If you’re lucky enough to be in Paris during this time, here’s our guide to making the most of Bastille Day.

Brush up on your history

If you want to share the locals’ enthusiasm for this legendary national holiday, it helps to know why it’s so historically important. Bastille Day commemorates the storming of the Bastille prison on July 14, 1789, which marked a pivotal moment for the famous French Revolution. The ordinary people of Paris decided they no longer wanted to accept the absolute power of the king.

It wasn’t until 1880 that an annual national holiday on July 14 was voted into law by the Assembly and Senate, but it’s been a key date in the French calendar, with celebrations taking place without fail, ever since.

Parisians have a unique way of celebrating Bastille Day, which involves dancing the night away at one of the many Bals des Pompiers (Firemen’s Ball). These parties are organised at Paris fire stations in different districts of the capital on July 13 and 14, so it’s the perfect way to get into the festive spirit before the day even begins.

While there are plenty of choices for Firemen’s Balls on the 14th, the best one is on the eve, July 13. These dances are hosted by the city’s fire stations – a full list of those participating is published a few weeks in advance by the tourist board.

With disco lights and live bands, DJs and drinks on tap, these events are hotly anticipated with heaps of dancing involved. The night usually begins at 9pm and can go on until around 4am, though most wind down by midnight.

The admission fee varies depending on each station, though many only ask for donations at the door with proceeds going to charity or to improve the facilities of the 8,700 heroic men and women who comprise the largest fire brigade in Europe.

Get up early for the parade

If you’re not too tired from partying the night before, then make sure to set an alarm so you can see ‘the oldest and largest regular military parade in Europe’, which completely takes over the Champs-Élysées. Literally everyone will be gazing awe-struck at the military parade, including President Macron, who usually turns up at the Arc de Triomphe at 10am.

The incredible military planes soar across the sky in the colours of the French flag at 10.45am – it’s a breathtaking spectacle. After gazing at the displays, people then make their way over to the Place de la Concorde. What’s so special about this day is the sense of community, where throngs of people are celebrating on the streets as one.

Make sure to arrive early if you want to stand a chance of seeing the Bastille Day celebrations, as it gets incredibly busy. With the abundance of crowds, many of the metro stations nearby are closed between 8am and noon.

Tuileries and Concorde are usually completely closed and those along the Champs-Élysées (Champs-Elysées–Clemenceau, Franklin D. Roosevelt, George V, Charles de Gaulle–Étoile) have restricted access, so make sure to plan your journey in advance. You can easily get off one or two stops from the destination and walk the rest of the way.

As if the Firemen’s Ball and the brilliant military parade weren’t enough, there’s yet another reason to get excited about July 14 in Paris. Every year, many of Paris’ museums and attractions open their doors free of charge.

You can make the most of this day by popping into the Louvre, dodging the usual €15 (£13) entrance fee. And since most of the crowds will be clustered around the parade, some people say this is the best day of the year to visit the Louvre.

You can also enjoy the Notre-Dame Cathedral, the Musée d’Orsay and the Chateâu de Versailles on Bastille Day, though the Arc de Triomphe and the Eiffel Tower have restricted openings, along with the Musée de l’Orangerie, which is closed in the morning. Make sure to check the opening hours of each venue in advance.

Celebrate on a cruise

One of the best ways to celebrate Bastille Day in Paris is with a cruise on the Seine, admiring the fireworks from a boat. The Bateaux Mouches is one of the most popular options, boasting a live orchestra for musical entertainment. Though the real reason people are drawn to the Bateaux Mouches on Bastille Day stems from its gastronomic reputation.

If you choose this cruise, you’ll be served a gourmet French menu composed of appetisers, caramelised and smoked duck foie gras, langoustines, château filet and a crispy vanilla tart. It lasts two hours and 15 mins, but there are plenty of other special Bastille Day event packages on offer from numerous tour companies.

Gaze awe-struck at the fireworks

The highlight of the celebration consists of the vibrant colours of the explosive firework display that dazzles the sky from around 11pm. It’s the city’s only fireworks display and keeps the population awe-struck for 30 to 35 minutes.

The most popular places to enjoy the spectacle are at the Champ de Mars and the Jardins du Trocadéro, but do be aware that these highly coveted spots get incredibly busy. If so, you could opt for the banks of the Seine and its bridges – a picnic and a bottle of wine make a great addition.

If you can get there early, then the very best views will be gained from atop the Tour Montparnasse, cocktail in hand, though it can be difficult to secure a seat.

Make sure you can get home safely

The metro stays open until 2.15am on July 13 and 14, but you need to know that all the stations within a two-mile radius of the Eiffel Tower will be almost impossible to use once the crowds have finished gazing at the fireworks.

You could try calling a taxi or ordering an Uber, but know that road closures might mean you have to walk a little bit before they can even gain access. But fear not, the streets of Paris are glorious to explore at night.