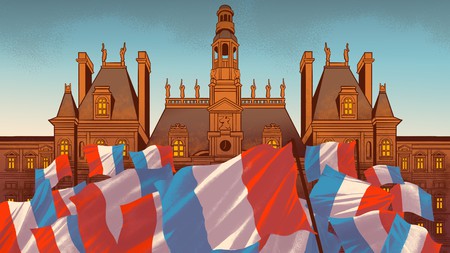 Before Paris became the City of Lights, the chaos of revolution saw much of the city burned, looted and destroyed. But without the destruction, Paris as we know it might have never come to be.

If you’ve been lucky enough to stroll under the cherry blossoms that surround Notre Dame de Paris – perhaps while enjoying an ice cream from nearby Berthillon – it’s hard not to be swept up in the romance of the city. But Paris’s reputation is largely a result of chaos caused by the French Revolution in 1789. The rift saw the overthrow of the French monarchy and the expulsion of the Catholic Church and a citizenry eager to define a new France. If you know where to look, you can see signs of the ideological conflict all over Paris.

While memorials appear throughout the capital, early post-Revolution changes to the city were mostly underfoot and in the details. Due to a lack of funds, the new republican government had to be resourceful when it came to rebuilding Paris, rebuilding only where necessary and using small ornamental details to signal the regime change. The Tricolore was placed atop royal palaces, churches like Basilica Ste-Genevieve were transformed into secular temples, and the Gallic rooster – a representation of French republicanism – adorned facades.

These decorations may not evoke the revolution to the same degree as large memorials do, but these symbols were some of the first ways Paris began to rebrand as the capital of the republic. Memorials came much later, functioning as a meditation on the impact of revolutionary ideology on French identity.

Place de la Bastille and its centrepiece, Colonne de Juillet (July Column), best signify the French Revolution for many people because they both feature heavily in Bastille Day celebrations. And although the square is located where the infamous prison once stood, the column actually commemorates the July Revolution of 1830. It was meant to be constructed from rubble, but by the time the column was erected in 1835, the materials had long been used up. You have to look more closely to see the real ruins left after the sans-culottes freed the prison’s political prisoners.

“At the start of the Revolution, Pont de la Concorde was being built and was finished with the stones of La Bastille. It’s said that Parisians were happy because they could stamp on La Bastille when crossing the bridge,” explains art historian Dr Linnéa Tilly.

Even the casualties of the conflict would become part of the city’s infrastructure. Eighteenth-century expansions led to overmining of southern Paris’s quarries, and soon the city began collapsing under its own weight. The solution to this problem would be found with the city’s dead. “Skeletons are actually stone, they’re lime,” explains Tilly.

Place de Denfert Rochereau – where the entrance to the Paris Catacombs is now – became known as ‘Place d’Enfer’ (place of hell) because houses would collapse into the earth. Many of the 40,000 killed in the revolution were among the 6 million to 7 million bodies interred in the catacombs that stabilise much of the Left Bank, including that of Maximilien Robespierre. Keep an eye out and you might spot urban spelunkers emerging from beneath the streets after a clandestine tour of catacomb tunnels closed to the public.

Buildings that weren’t irreparably destroyed were repurposed in other ways. Great homes and palaces were seized from aristocracy who were either exiled or executed, making way for a new Paris to form.

Following the end of Robespierre’s Reign of Terror in 1794, French society began to stabilise and Parisians engaged in a new consumer culture. “A lot of exclusive houses would become the passages couverts (covered passages) we know today. The Palais Royal became an experimental site where the new bourgeoisie was reinventing the lifestyle of leisure through new urban spaces,” says Tilly.

Open-air market streets typify the modern romantic ideal of the city, but trudging through the streets of 19th-century Paris was less than desirable. “There was no sewer system, so the streets were really dirty. The Palais Royal garden had a wood-covered street where people could shop in a safe and clean space,” says Tilly.

Shopping culture and gorgeous interior passages like Galerie Vivienne and Passage Verdeau developed into social centres as the city began to rebuild. Its people were rearticulating what it meant to be French and what a French way of life could look like.

“The problem with architecture is that it takes time, costs money and is very political,” explains Tilly. “In Paris, many of the recycled aristocratic sites have the Imperial Eagle, royal symbols and then the Tricolore, the flag, on top of it all. This seems very contradictory, but in France it’s normal.”

Monuments built during the early 19th century relied heavily on Neoclassical design as a way to draw parallels between the French republic and the democracies of ancient Greece and Rome. Buildings that already had Neoclassical stylings like the Panthéon – formerly the Basilica Ste-Genevieve – were well suited to transformations into major memorial sites. Not only did the style’s clean lines offer a stark contrast to the opulence of royal commissions from the early 18th century, but Napoleon I also had an affinity for its connection to the Roman military.

The Imperial Eagle that adorns throne rooms, apartments and desk baubles in Napoleon’s former residences was borrowed directly from Rome. Monuments like the Arc de Triomphe also employed Neoclassical reliefs, depicting warfare from both the revolution and the Napoleonic wars. Under Napoleon, the memory of revolution was used to conflate revolutionary idealism with his expansionist policies.

It took another revolution to pave the way for contemporary Paris. Following Napoleon I’s exile in 1815, the monarchy made a brief return only to be overthrown again in 1848. Soon after, Charles-Louis Napoléon Bonaparte was elected as the first president of France, soon following in his uncle’s dictatorial footsteps, declaring himself Emperor Napoleon III in 1852.

Napoleon III commissioned Georges-Eugène Haussmann, who transformed Paris into the city we know today. Boulevards were widened, green spaces were opened to the public, and the Haussmann buildings that dominate Paris streets were constructed. Haussmann also modernised the urban infrastructure with the installation of clean water pipes and gas lines for lights and heating.

The Paris that 18th-century revolutionaries would have recognised all but disappeared. Many accused Haussmann of erasing Paris’s Medieval charm, but his redesign ushered in better living conditions, access to public spaces and the leisure to enjoy shops and cafés in the city. This new Paris in many ways saw the ideals of the revolution realised, though Haussmann’s legacy has also come under fire. While large boulevards created opportunities for the city’s commercial enterprises, they also allowed the army the freedom of movement needed to effectively head off any future revolts.

If you visit Paris today, the revolution is everywhere you look. When viewed from above – and there are plenty of places to get a stellar view of Paris – the contours of the city highlight Paris monuments and the uniformity of Haussmann apartments accents their grandeur.

“There is Paris before the revolution and changes that take place during the revolution, but the real changes actually happen long after,” Tilly explains. After nearly a century of sorting through the rubble, the City of Lights was finally able to shine.