What if your guide in Paris was a famous film director like Woody Allen or Luc Besson? This fantasy is closer to reality than you think. Discover Paris in a surprising and original way, by following in the footsteps of your favorite movie characters. We’ve picked seven iconic locations from well-known modern movies to zest up your Parisian explorations.

The Café in Amélie

After a tiresome walk up and down Montmartre’s steep streets, enjoy a cup of grand crème at Café des Deux Moulins, just a block away from Blache metro station in the 18th arrondissement. You might not get Amélie Poulain as a waitress, but you will get a taste of the whimsical and melancholic world of this daydreaming character in a typical Parisian brasserie.

Still from The Fabulous Destiny of Amélie Poulain, 2001

The Endless Bridge from Inception

Remember when Cobb (Leonardo DiCaprio) showed gifted student Ariadne (Ellen Page) how to construct dreams and create imaginary places? One of the most iconic scenes from the movie Inception (2010) was filmed under the bridge Bir-Hakeim in the 15th arrondissement. If you want to add mystery to your late evening walk near the Eiffel Tower, this is a perfect spot.

The Steps from Midnight in Paris

The steps of the Church of Saint-Étienne-du-Mont are a perfect place to stop and eat a sandwich after a walk in the Quartier Latin. We can’t guarantee that wonders will start happening once you sit here, however it is where the main character of Woody Allen’s Midnight in Paris (2011) would await his cab from the past, so you never know.
Open In Google Maps
Place Sainte-Geneviève, Paris, Île-de-France, 75005, France
+33143541179
Visit Website
Give us feedback

Salon du thé from Sex and the City 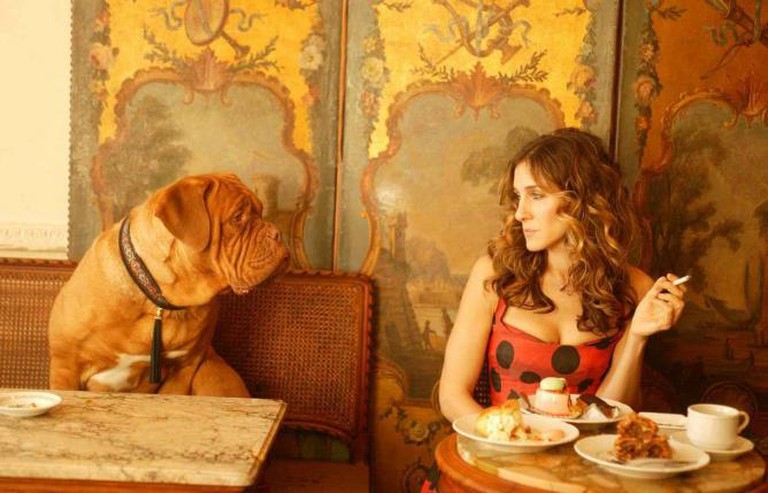 Still from Sex and The City / An American Girl in Paris – 2005
If you are about to indulge yourself in sinfully good Parisian pastries, why don’t you do it Sex and the City style? By the end of the Carrie Bradshaw saga, when our beloved fashion icon and a hungry adventurer finds herself rambling around alone in Paris, she comes across this ultra-refined salon de thé. Get your ‘Carrie’ moment in Maison Cador. Trust her taste.
Open In Google Maps
2 Rue de l'Amiral de Coligny, Paris, 75001, France
+33145081918
Give us feedback

The hidden park from Before Sunset

Secret park Coulée verte René-Dumont on the top of an obsolete railway infrastructure is a well-known first date spot among Parisians. No surprise, it was chosen as one of locations for the sequel to the romantic drama Before Sunrise (1995). Go up the stairs at 44-46, Rue de Lyon and enjoy a meditative walk that, as the film has proved, inspires deep philosophical discussions as well as mind-liberating decisions.
Open In Google Maps
1 Coulée Verte René-Dumont, Paris, Île-de-France, 75012, France
Visit Website
Give us feedback

Fountain from The Devil Wears Prada

If you want to repeat the audacious gesture of Meryl Streep’s protégé, who threw her phone into the fountain to put an end to her exhausting career, go to the Place de la Concorde. The twin fountains, La Fontaine des Fleuves and la Fontaine des Mers, are a great viewpoint to feel fully surrounded by Parisian landmarks such as Tuileries, the Arc de Triomphe and the Eiffel Tower. Think twice before getting rid of your phone though.

Still from The Devil Wears Prada, 2006

Pont Neuf and La Samaritaine from The Bourne Identity

When you cross Pont Neuf in Paris keep in mind that someone might be watching you at this very moment from the roof of the Samaritaine department store. At least that was what Matt Damon was doing in The Bourne Identity (2002). If only he could have done better job speaking French, even though ‘Punt Noof’ sounds rather charming.

Still from The Bourne Identity, 2002
Give us feedback