The Heartbreaking Origin of 'Love Locks'

All around the world, bridges struggle to stand under the weight of hundreds (occasionally thousands) of padlocks. It isn’t clear whether it is the steel or the romance that causes the toil, but the love lock phenomenon has well and truly taken over. Many attribute the beginnings of this craze to conventionally romantic cities like Paris, but what if we were to tell you that the tradition started in a little Serbian town, from the ashes of a love denied?

The town was Vrnjačka Banja, and the year was 1914. Europe was teetering on the edge of all-out conflict, and young men all over the Balkans were faced with the prospect of being sent off to fight to their deaths in a hopeless battle. One such boy was a soldier by the name of Relja, and like many others he had an extra reason to want to stay at home. That reason was romance, and in this case, romance took the name of Nada.

Nada and Relja were inseparable, as are many young lovers. Neither doubted the sincerity of their love, and as such they were quick to commit to each other for life. They quickly became engaged, with dreams of families and eternal love closer than ever. Life is a cruel mistress, however, and the impact of Gavrilo Princip’s bullet was felt throughout the world. Austria declared war on Serbia, and Relja had no choice but to don his uniform and defend his country.

Nada was heartbroken, but she believed in her heart of hearts that Relja would survive the war and they could continue from where they left off. What Nada didn’t take into consideration was that men are the absolute worst. Relja never returned to Vrnjačka Banja, having fallen in love with a girl in Corfu while at the front. Nada was heartbroken, and she fell into a grief that she never recovered from. The schoolmistress died young and alone, ostensibly of a broken heart, another tragic ending to a story of young love. 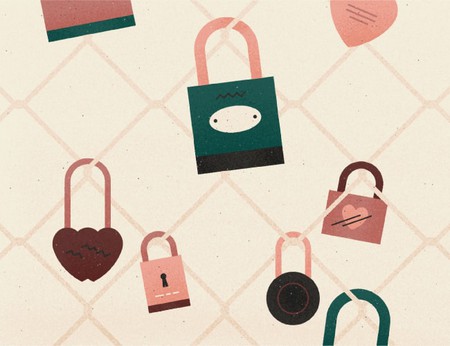 The other girls in town were understandably perturbed by this turn of events, and they quickly moved to ensure their own romantic futures. The women of Vrnjačka Banja purchased padlock after padlock en masse, quickly writing their names and those of their betrothed on the locks before attaching them to the bridge where Nada and Relja used to meet. The keys were hurled into the river, ensuring a life of fidelity. Phew!

The story of Nada and Relja was largely forgotten until Serbian poet Desanka Maksimović brought it back to life in her poem, Molitva za ljubav (Prayer for Love). This time the story caught fire and young lovers across town started attaching padlocks to what soon became the Most ljubavi, or ‘Bridge of Love’.

Towns all over the world started copying the tradition, but places like Paris, Barcelona and the rest would eventually be forced to cull the locks in order to preserve the bridges, starting the process all over again. South Serbia is a land of superstition, however, and the locks have never been removed from the Bridge of Love. There are more than 15 bridges in Vrnjačka Banja, but you can’t mistake the one that has captured the hearts of men and women across the globe.

Is the story of Nada and Relja true? Does it have to be? World War I was a hideous conflict that put a tragic full stop on the romances of many young lovers across the globe, and the desperation of those left behind was a very real thing. The characters of this story may be fictional but the intangible adoration is not. Many may roll their eyes at the love lock trend, but romance has survived centuries of cynicism already. A little more isn’t going to hurt.

Vrnjačka Banja is known throughout the region as a major spa town, where the weary go to heal themselves ahead of the next round of work. Its story as the home of European romance is less known, but the tale of Nada and Relja will live on for many years to come.