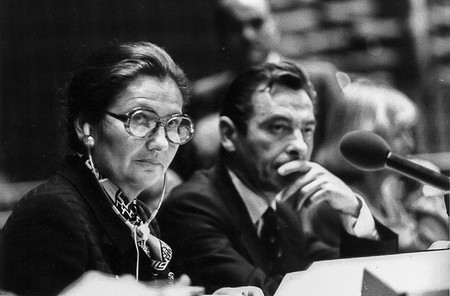 Thousands of people attended the burial of feminist icon Simone Veil in Paris on Sunday, as she was given the rare honour of a burial at the prestigious Panthéon. A Holocaust survivor and women’s rights defender, Veil led the battle to legalise contraception and abortion in France.

The impressive neoclassical facade of Paris’ famous Panthéon, which is modelled after the great Pantheon in Rome, currently functions as a secular mausoleum for the remains of France’s greats. However, heralded by the inscription outside the building ‘To its great men, a grateful fatherland’, most of the people buried inside are men.

To be buried in the Panthéon is an exceptional honour but surprisingly, until very recently, this was an honour from which female French citizens were excluded. There are 72 men interred within this building, including the likes of writer Victor Hugo and the philosophers Voltaire and Jean-Jacques Rousseau.

Following the death of Simone Veil on June 30, 2017, aged 89, thousands of people signed a petition for Veil to increase the grand total of female citizens buried in the Panthéon from four to five.

The burial of French Holocaust survivor and pioneering political activist Simone Veil in the Panthéon represents a symbolic victory in many ways – not just because the Panthéon will finally honour another woman, but because of the values for which she stood.

Veil was famous for her fight as health minister to legalise contraception and abortion in France in the face of strong opposition. As well as this, she introduced measures to help those with HIV and secured improved rights for prisoners and children in the care system.

In a speech on the Panthéon’s steps, French president Emmanuel Macron said that Veil’s burial there marked the entry ‘of a generation of women who made France without the nation ever giving them the recognition or freedom that was due to them. Today, through her, justice is done for all of them’.

Not everyone is keen to see their relatives support the glory of a male-dominated mausoleum, though. For example, two female French resistance fighters during the Nazi occupation were offered a spot in the Panthéon, but their families declined the offer.

Some French feminists refuse to forget how Sophie Berthelot was included as the wife of her better-known husband, chemist Marcellin Berthelot. She died on the same day as her husband and was interred with him ‘in homage to her conjugal virtue’. This underlines just how difficult it has been for women to be recognised for their own intellectual merits, as Nobel prize-winner Marie Curie miraculously achieved.

In addition to the thousands of people who gathered for her burial, a metro station and a square in Paris were renamed after Veil in May and a group of street artists called ‘Merci Simone’ have recently adorned the streets of Paris in her honour.