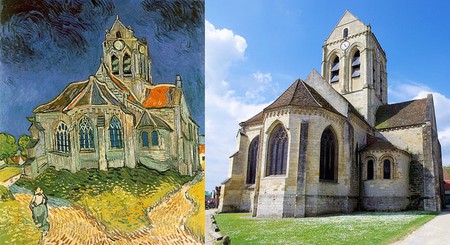 Auvers-sur-Oise is an art lover’s paradise. Its seven-kilometre stretch of vineyards and moss-dappled stone farmhouses, many of which shelter half a millennia of history, have inspired artists for just as long. While it might not be as well known as Paris, this artists’ village is the hidden gem in Île-de-France that all art aficionados should know about.

Auvers-sur-Oise is a veritable open-air museum

With signposted trails marking where Van Gogh, Cézanne, Pissarro, Rousseau, Corot, Daubigny and more plonked their easels, Auvers-sur-Oise is like an open-air museum. Both the lonely wheat fields and the legendary Church of Auvers were painted by Van Gogh and the village’s streets conjure up a ghost-scape of gorgeous artistic impressions. 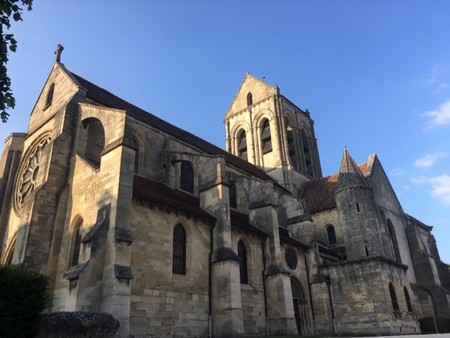 Visiting the village is a little like stepping into a painting, for as soon as you step off the 9507 bus from Pontoise, you’re greeted by the town hall depicted in Van Gogh‘s The Town Hall at Auvers.

Only a few dozen metres away, the famous Dutch post-Impressionist agonised over Village Street and Steps in Auvers with Two Figures and Chestnut Trees in Blossom, which still burst into bloom each summer. 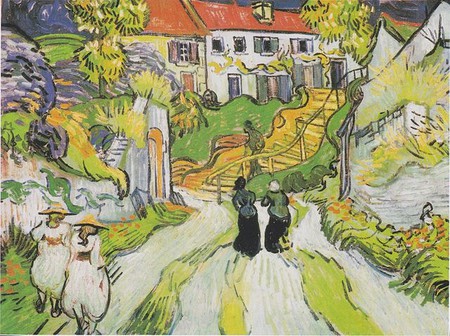 Make sure to download the Van Gogh Natures geolocation app for a personal multimedia tour. It’s also a good idea to stop by the tourist office as soon as you arrive because it stocks free maps of the village with walking trails. Even when closed, you can use the machine to send a map to your mobile.

You can follow in the footsteps of Van Gogh

Auvers-sur-Oise is particularly famous for its links with Van Gogh. The misunderstood genius first arrived in the village May 20, 1890. While he stayed no longer than 70 days, his visit left a lasting mark on the history of art.

Van Gogh stayed at Café de la Mairie (now Auberge Ravoux), shoving his work under what would eventually become his deathbed. The building has been a historic monument since 1985, as it’s the only residence of his to remain intact. 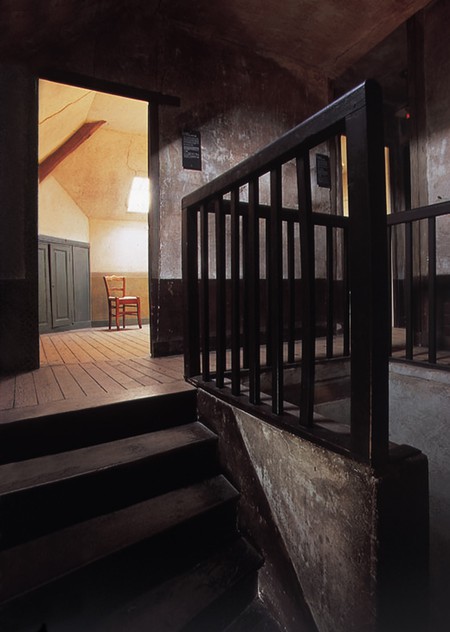 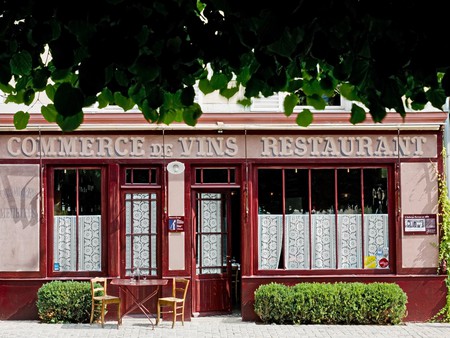 As well as visiting Auberge Ravoux, there are also lesser-known gems, like 53–55 Rue François Villon. This address features in Landscape with Carriage and Train in the Background and the blue-shuttered cottage of 7–9 Rue du Gré in Houses at Auvers is worth the visit, too.

The haunting series of Van Gogh’s Wheat Fields landscapes that lurk beyond the country lanes emerge when you take the Hérouville road from the Castle of Auvers, which is located on the street called Chemin des Berthelées. However, it’s The Church at Auvers, pitting its ultramarine blotches against pure cobalt skies, that promises the most harrowing encounter. The village is also the final resting place of the misunderstood genius himself.

With Van Gogh said to have shot himself in the fields behind the castle in 1890, the village has become the setting for one of the most famous deaths in art history. But it’s also one of the most contested, sparking furious historical debate.

The story of the tortured soul has seduced tourists for years, but many local inhabitants (les Auversois) dispute the suicide theory. Based on witness accounts passed down through generations and re-evaluated medical reports, 74bis Rue Boucher, which is quite possibly the site of Van Gogh’s murder, is resurfacing as a new site of pilgrimage. 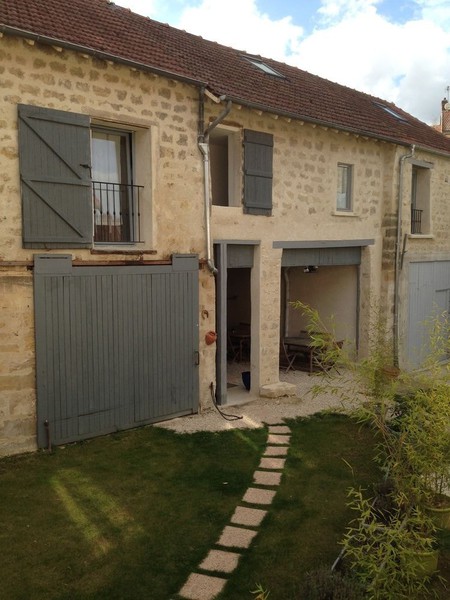 The old farm has recently been renovated into the gorgeous Gite les Tournesols, and so it’s a fabulous place to stay. Its four spacious, self-catering apartments are themed around Van Gogh, like the 55 m2 Night Sky, whose ceiling is a breathtaking constellation of 100 LED stars, mimicking the painting. Except for the windows, everything here is original, offering authenticity in abundance. 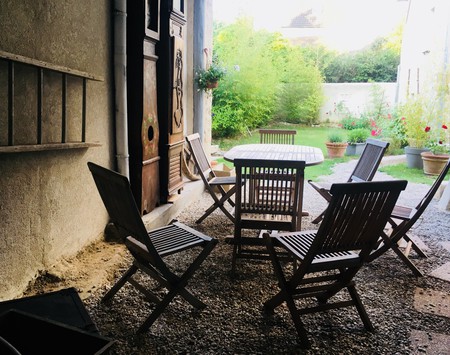 With little trace of Van Gogh’s tools, the hand press used to produce Portrait of Dr. Gachet on display in Doctor Paul Gachet’s House becomes all the more precious. Gachet was not only Vincent’s doctor, but also his confidant in Auvers-sur-Oise and Vincent often painted at his house. There’s no more than a half hour walk between the cemetery and this house.

The village inspired the birth of Impressionism

With the advent of the railway in the mid-1800s, Auvers-sur-Oise gained direct links to Paris, making it the ideal destination for a quick escape to the country. Gliding past fields of poppies and rolling hills at high-speed left delightful momentary impressions on the eye, which is essentially what is said to have inspired the Impressionists. 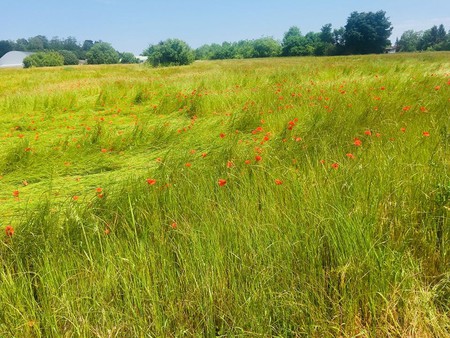 As well as Van Gogh, many other artists have spent time soaking up the charm of Auvers-sur-Oise: Pissarro flaneured the Oise valley with his easel and Cézanne spent 18 months enthralled, too. Charles-François Daubigny, one of the forerunners to Impressionism, is particularly linked to the village. After mooring his studio barge Botin here in the 1850s, the soothing river Oise became his most cherished spot.

Daubigny was a pioneer of outdoor painting in France, striving to capture the fleeting effect of light on water. He was among the first artists to paint ‘wet on wet’, allowing the completion of a painting outdoors in just one session. You can marvel at his paint strokes at Daubigny’s Home Studio or the Daubigny Museum, which have more than 1,000 works on show between them. 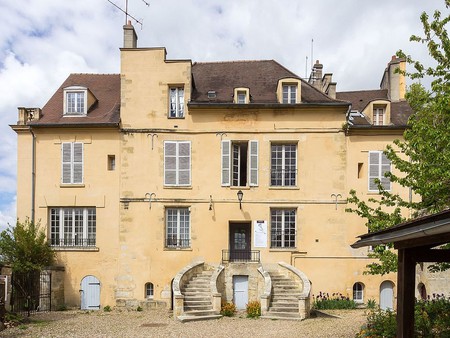 The village has welcomed Jean-Baptiste Corot and painters like Eugène Murer and Norbert Goeneutte, as well as Germany’s Otto Freundlich and Venezuela’s Emilio Boggio. Boggio painted more than 400 pictures in this village between 1910–1920.

Stepping into Boggio’s studio at 47 Rue Émile Boggio, left eerily untouched, is like stepping back in time. His last canvas lingers on the easel, with his smock and hat still dangling on the coat hanger.

As well as cherishing the legacy of former artists in its museums, artist studios and the castle Auvers-sur-Oise are bursting with creativity today. The tradition continues with 40 artists working here, whose work can be enjoyed free of charge at the local contemporary art gallery at 5 Rue du Montcel.

Atelier d’Art Créatif is the best art workshop to book in the village and you can do so as a complete beginner. All that’s required is a willing enthusiasm to indulge your creative desires in a fun and friendly three-hour workshop. 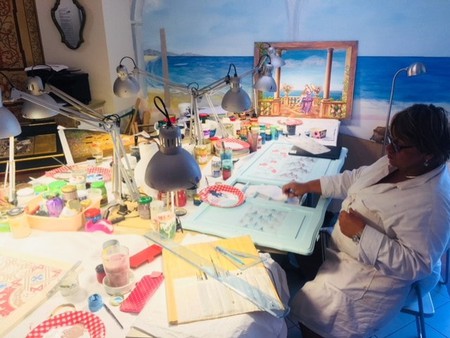 All the necessary painting materials are provided, so all that you need to do is turn up and enjoy. It’s the perfect opportunity to leave with a unique handmade souvenir, rather than just buying one in the shops.

There’s also no need to worry about luggage restrictions, as you’ll decorate a light wooden plaque, which is small enough to slip into a suitcase.

What’s great is that Hélène is more like a helpful muse, rather than a strict teacher, guiding the workshop with fluent and friendly English. 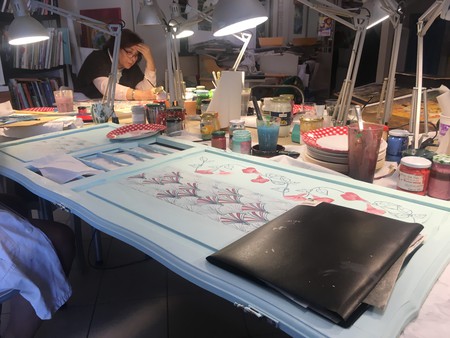 If that wasn’t enough reason to convince you to visit Auvers-sur-Oise instead of Paris, the annual events program has something of an artistic touch, too. Les Irisiades (Artistic Floral Festival) takes place during the fourth weekend of May and L’art aux Jardin (Artistic Gardening) takes over the first weekend of June.