Feel the Love With The Most Passionate Kisses in Art 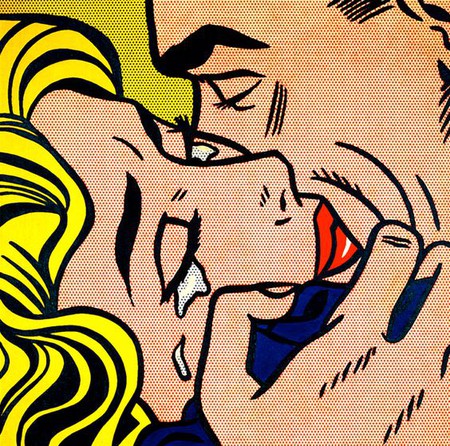 With love in the air, Culture Trip’s Art & Design editor Freire Barnes rounds up some of the best kisses in art history. Some are familiar, some classical, some even a little absurd, and all capture the essence of love and passion.

As February 14th marks the celebration of St. Valentine – the priest who married couples in the face of adversity – we’ve selected some of the most romantic artworks from art history that all illustrate the many facets of love from fleeting moments to idyllic unions. 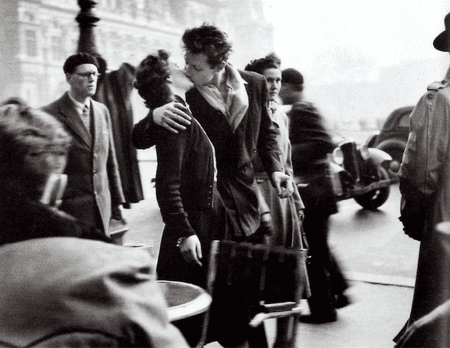 Paris has a reputation as the ‘City of Love,’ and French photographer Robert Doisneau’s famous photograph, The Kiss at the Town Hall, certainly captures that. The fact that the picture was staged doesn’t really matter, as Doisneau’s photograph beautifully captures a brief moment in time – a romantic embrace that has come to symbolise a sense of freedom and frivolity post Second World War.

The Kiss by Lichtenstein

The cartoon aesthetic of Pop artist Roy Lichtenstein‘s The Kiss gives it universal appeal. Yet, due to the woman’s tears, it remains ambiguous as to whether our comic strip characters are reunited lovers or a couple on the brink of breaking up. Because we’re hopeless romantics, we’re going with the former. 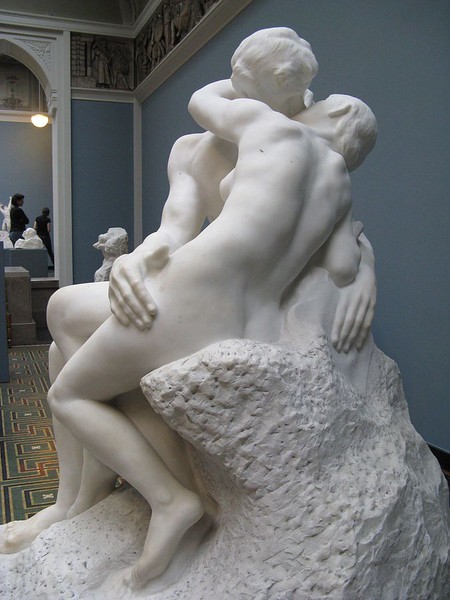 The Kiss by Rodin

Rodin made three large scale versions of the adulterous lovers Paolo Malatesta and Francesca da Rimini who appear in Dante’s Inferno. Originally intended for inclusion in Rodin’s Gates of Hell, the kissing couple were deemed too risqué and have subsequently become one of the iconic representations of sexual love. 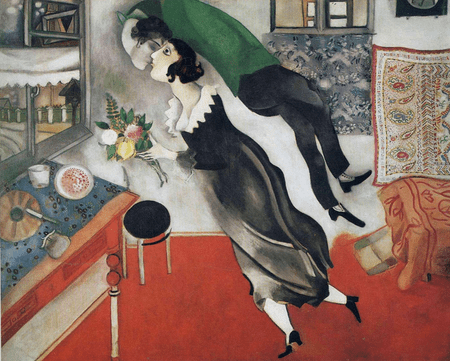 The Birthday by Marc Chagall

Full of joy, giddiness and the gravity-defying elation love can give you, Chagall‘s depiction of his birthday truly captures the transcendental relationship he had with his wife Bella, whom he married in the July of 1915. 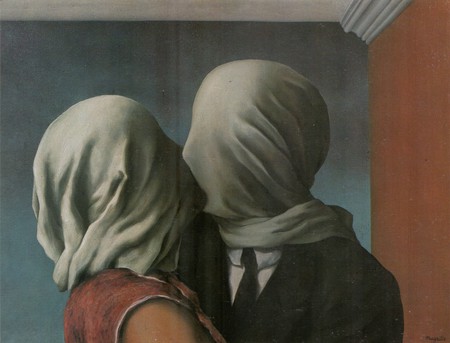 The Lovers by Magritte

Nothing like a sheet getting in the way of a good ol’ kiss. Here, Magritte turns the passionate act of locking lips into a frustrating moment as two enshrouded faces are obscured from fully engaging. It’s wonderfully absurd – and typically Magritte. 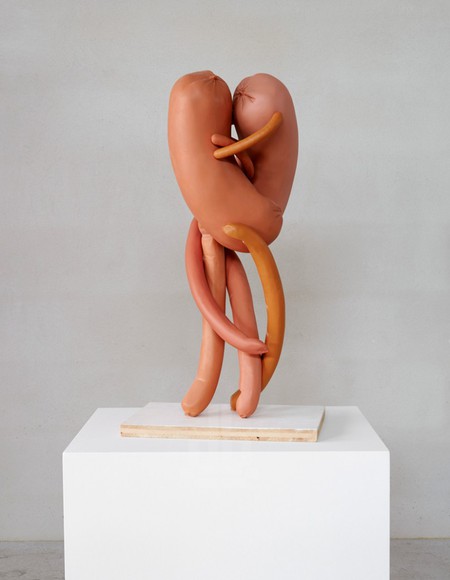 What a couple of sausages! Whether or not Wurm’s sculpture inspired Seth Rogen’s Sausage Party remains to be known, but the Austrian artist’s two entwined frankfurters hysterically subverts the moment of human intimacy into an illogical and goofy scenario. 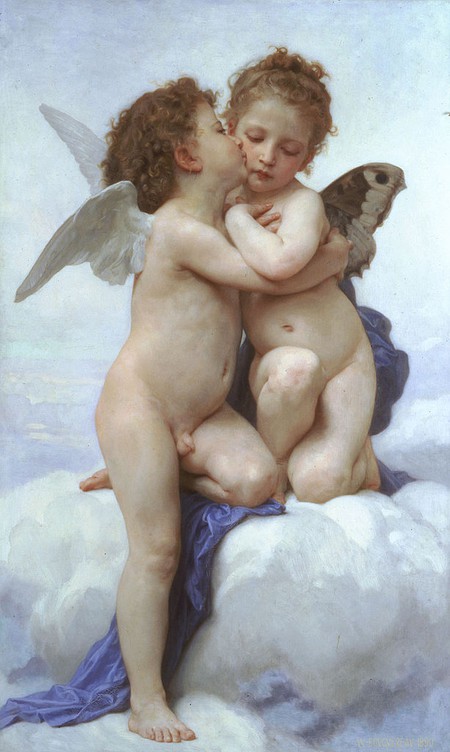 Cupid and Psyche as Infants by William-Adolphe Bouguereau

Known for his modern interpretations of classical subjects, the French 19th century painter took the mythological story of Cupid and Psyche that features in Apuleius’s Metamorphoses and reimagines the star-crossed lovers as children. Love here is refashioned as innocent and pure. 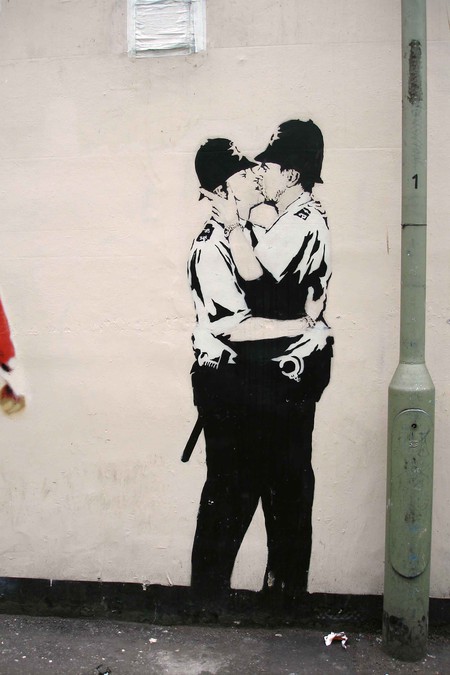 Banksy’s probably best known for his mural of two kissing policemen, which was famously removed from the wall of a Brighton pub and sold at auction in the US for $575,000. Satirical and cheeky, it’s one of the most romantic works of street art we know. 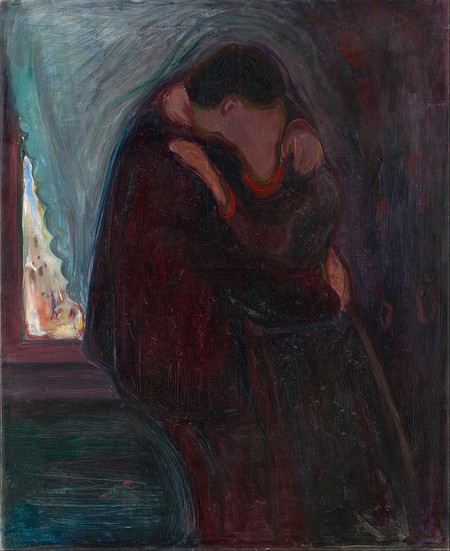 The Kiss by Edvard Munch

Although supposedly ambivalent to romance, Munch’s kissing couple represents the unity between a man and a woman. From part of his Frieze of Life series that captures the stages of a relationship, Munch fuses the faces of the embracing couple, alluding to their solidarity. 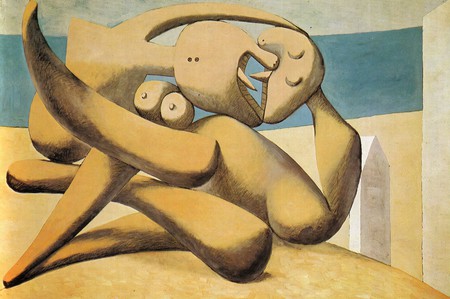 Figures on a Beach by Picasso

Emerging from the sandy dunes of the beach, this passionate entanglement of a kissing couple is all arms and legs. Painted at Picasso‘s French Riviera holiday home in Juan-les-Pins, it was probably inspired by his relationship with a 19-year old model, and incorporates various perverse Surrealist symbolism. 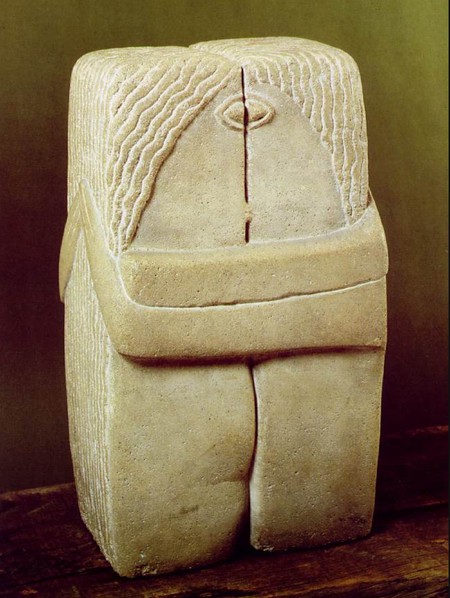 The Kiss by Brancusi

The French-Romanian sculptor made many versions of this simplified representation of a kissing couple. An early form of Cubism, Brancusi’s The Kiss echoes the sensibility of Neolithic sculpture as well as reduce an intimate moment into an effortless abstraction carved from one piece of stone.