The Malian musician Fatoumata Diawara, now living in Paris, says singing was like medicine for her. As she moved around the world she took along her Malian customs and fused them with her new global outlook. 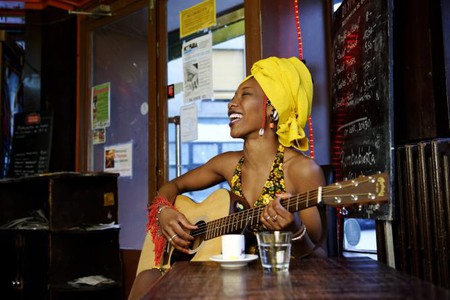 Born in Ivory Coast to Malian parents in 1982, Fatoumata Diawara first started her international career as an actress in France. She appeared in films such as La Genese by Cheikh Oumar Cissoko and Sia, La Reve Du Python by Dani Kouyate, whilst also appearing in street theatre such as Royal de Luxe and musical performances with which she toured the world. During breaks from her tours, Diawara would sing in the cafes and clubs of Paris, until she was invited back to Mali as a chorus vocalist for the Malian star Oumou Sangare and American jazz singer Dee Dee Bridgewater, with whom she once again toured the world. 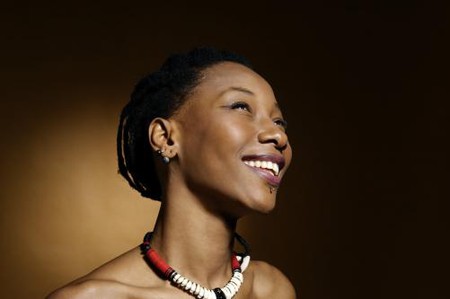 From then on, Diawara took up the guitar and began composing her own songs. Teaching herself the guitar was a defining moment for her musical calling, saying that it was ‘a wonderful and daring thing: a Malian girl with an acoustic guitar. Why should a guitar only be for men?’ Her music blended Wassoulou traditions from the southwest of Mali, with the musical styles she had picked up from her travels around the world.After the decision to dedicate herself to her own music, Diawara appeared in several solo performances and released her debut album, Fatou, after signing a record deal with World Circuit.

Wassoulou culture is widely recognized for its musical riches, particularly the distinctive style of strong female vocalists alongside the backing of customary Malian instruments such as the harp, fiddle and djembe. Similar in sound and style to early American blues, which itself was deeply influenced by the West African music imported during the slave trade, Wassoulou music can also be identified by its compassionate and engaging lyrics, which often touch on typical women’s issues. In this light Diawara’s music reflects the combination of local instruments and moving real life stories with her sensuous and smoky style. Her constant development as an artist and musician has now also put her in notable place in the realms of jazz and funk, collaborating with other famous stars such as Damon Albarn, Herbie Hancock and Tony Allen.
By Sarah Mitchell