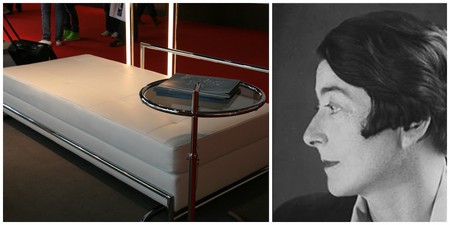 Though now recognised as one of the most important modernist designers of the 20th century, widespread acknowledgement of Eileen Gray’s contributions was a long time coming. Her supposedly complicated relationship with Swiss–French designer Le Corbusier, the man often credited as the pioneer of the modern movement, is widely documented, even being explored in the biopic of her life released in Irish cinemas earlier this year.

Born near Enniscorthy, County Wexford, in 1878, Eileen Gray spent her early years between her parents’ Brownswood Estate there and their second home in London‘s South Kensington. In 1897, the family legally changed their surname to Smith-Gray, after Eileen’s mother inherited the title of Lady Gray from a Scottish peerage. By that time Eileen’s parents were separated, and she had spent time travelling around Europe with her father, Scottish landscape painter James McLaren Smith-Gray. Inheriting his interest, Eileen began studying painting at London’s Slade School of Fine Art in 1898, before graduating on to the Académie Julian art school in Paris. 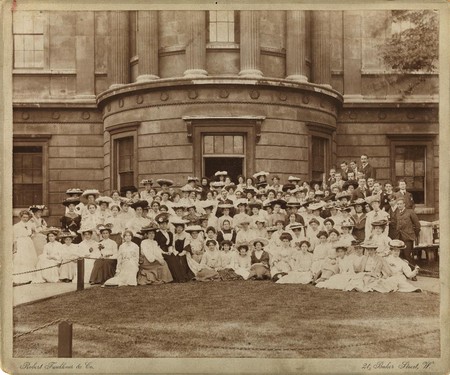 Having stumbled across the workshop of a lacquer artist in Soho in 1901, Eileen became enchanted by this new medium. After moving to Paris she sought out Japanese lacquer expert Seizo Sugawara, with whom she collaborated for several years. During this time she also began to experiment with weaving, alongside the well-known rug maker Evelyn Wyld. In 1913 she exhibited her lacquer work for the first time at the Salon des Artistes Décorateurs in Paris. She was 35.

Lacquered screen, circa 1921-23, by Eileen Gray. In 1906 Gray met Seizo Sugawara, a Japanese lacquer master living in Paris. She studied with him and was to become the first western practitioner of this Japanese art. The screen illustrated here features an incised linear decoration in a deep brown lacquer ground. It defines the moment where Gray's practice had evolved from the figurative to the abstract, with linear graphics as a constant. Today Eileen Gray is considered a pioneer of both Art Deco and Modernism. #eileengray #seizosugawara #lacquer #panels #japaneseart #moderndesign #artdeco #modernism #interiordesign #paris #japan #1920s

In 1917, Eileen was commissioned to design the interior of an apartment for a Madame Mathieu Lévy, owner of the Suzanne Talbot milliner boutique. Completed in 1921, the Rue de Lota apartment was to become something of a calling card for Gray. She created the majority of the furniture herself, including what is now one of her most recognisable creations – the semi-circular padded Bibendum chair, comically named after the Michelin man. Using chrome, steel and glass, her work was seen as stylish, ultra-modern, original and distinctive. She also created lacquer panels for the walls and her own unique carpets for the design.

With the praise for Madame Mathieu Lévy’s apartment, Eileen began receiving further commissions from people like fashion designer and art collector Jacques Doucet, and in 1922 she was finally able to open her own store in Paris. She is said to have named it Galerie Jean Désert to hide her gender, since at the time she was one of very few women working in the industry. From here, she sold furniture, wall hangings and rugs to wealthy clients, including Italian fashion designer Elsa Schiaparelli.

In the early 1920s, Eileen began work on her first architectural project, a modernist villa in the south of France named E-1027 – a coded combination of her own name and that of her friend and lover of the time, Romanian architect Jean Badovici. Eileen impressed the architectural community with the house, indeed Le Corbusier – a friend of Badovici’s – is said by some historians to have become enviously obsessed with it, painting obscene murals on the walls and even buying a house for himself close by. E-1027 is now a French National Monument, opened to the public for tours in 2015 following a full restoration.

The E-1027 villa by Eileen Gray in Roquebrune, Cap-Martin. Great to see it live today. Can imagine the sight, when she was inviting her neighbour Le Corbusier for a glass of wine at the terrace. #eileengray #e1027 #capmartin

After E-1027, Eileen designed a home for herself outside Menton, France. After World War II she moved back to Paris and continued to produce valuable work, though only becoming well-known in the design world towards the end of her life. After the renowned architectural historian Joseph Rykwert wrote an article praising her in Domus magazine in 1968, interest in her work surged, and Eileen agreed to a deal with British furniture and interior designer Zeev Aram to produce and distribute her pieces around the world from his Covent Garden store. In 1972, she was made a Royal Designer for Industry by the Royal Society of Arts in London.

Eileen Gray died in 1976, aged 98. The National Museum of Ireland in Dublin acquired her archives in the early 2000s and now houses a permanent exhibition of her work. In 2009, her Dragons armchair design reached €21.9million at auction in Paris, setting a new record amount raised for a piece of 20th century decorative art.