The Wishlist: An Arty Guide to Paris 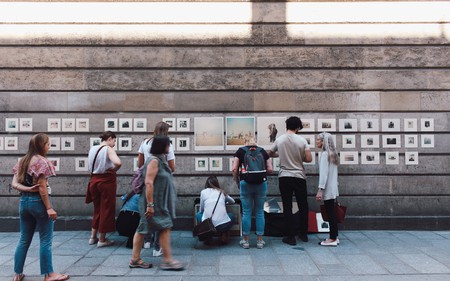 Check out some art in Paris | © Tetiana Shevereva / Unsplash

It’s the city where Dalí met Picasso; where Matisse studied under Moreau; and where Monet’s Impression, Sunrise gave name to a new movement.

Paris has long been home to a rich artistic heritage, inspiring artists to paint its cobbled streets and meandering River Seine, to sketch the city’s imposing architecture and to try to capture the elusive Parisian twilight, l’heure bleue.

Check out Culture Trip’s curated list of Paris’s artiest things to do and most intriguing places to eat and stay – from creating your own sketch of the city to walking in the footsteps of the French capital’s most famous artists-in-residence.

Make your own masterpiece at the Louvre 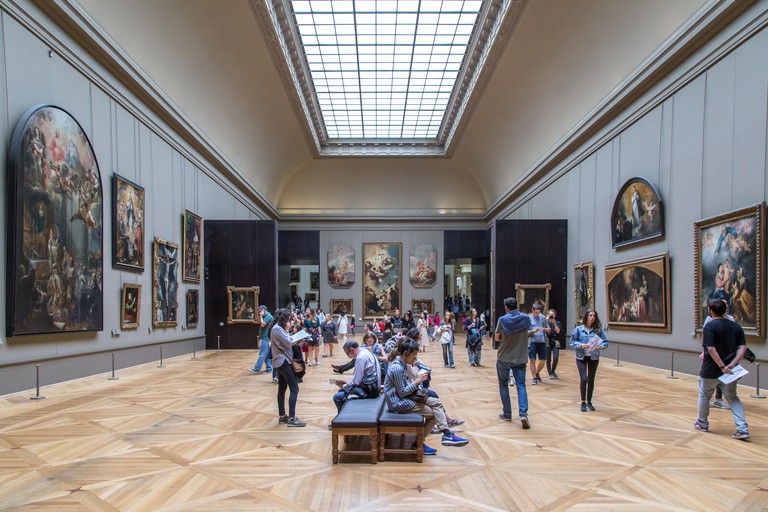 For any art enthusiast, no trip to Paris is complete without a visit to the Louvre. With 35,000 objects displayed in more than 60,000 square meters, the Louvre is one of the best museums in the world, housing classic works from the Italian Renaissance to Greek and Roman antiquities. However, if you’re looking to do more than queue up to view the Mona Lisa, try this private drawing class inside the Louvre itself – a must-do for any budding artist. Teaching the basics of drawing among the finest works of art in the world, this class offers the chance to see this Paris landmark from a different perspective.

Uncover a gem at the Musée Jacquemart-André 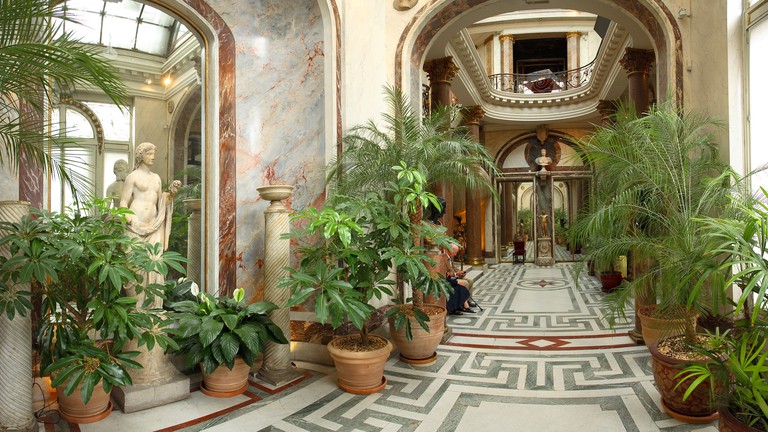 The Musée Jacquemart-André was once the home of eminent art collectors | © JOHN KELLERMAN / Alamy Stock Photo
Book Now
For somewhere less well known, take a trip to the Musée Jacquemart-André. Once the home of Édouard André (1833-1894) and Nélie Jacquemart (1841-1912), the building was converted and divided into five sections in 1913 to display the artworks that they collected throughout their lifetime. Housing dramatic paintings by Jean-Baptiste Le Prince and grandiose sculptures, as well as a winter garden designed by Henri Parent, this little treasure is great if you want to get under the skin of Paris’s artistic heritage.

Explore Impressionism at the Musée d’Orsay 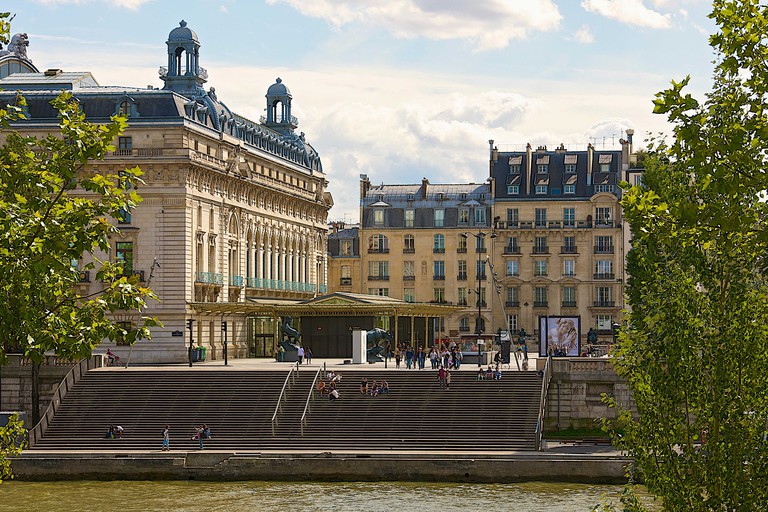 People flock to the Musée d’Orsay to see Impressionist and Post-Impressionist works of art | © Horizon Images/Motion / Alamy Stock Photo
Book Now
If picking up your own pencil doesn’t appeal, located opposite the Louvre, across the River Seine, is the Musée d’Orsay – world famous for its permanent exhibition of Impressionist and Post-Impressionist masterpieces. Set in a stunning former Beaux-Arts railway station, the three floors of the museum display works by artists Claude Monet, Paul Cézanne, Edouard Manet, Pierre-Auguste Renoir, Paul Gauguin and Vincent van Gogh, among many others. A must-visit for any art lover in Paris.

Take a tour of artistic Montmartre 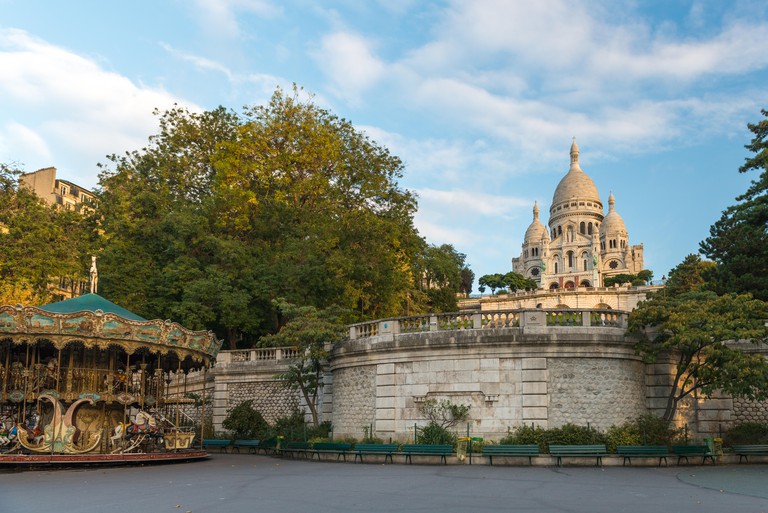 If the Impressionist masterpieces of the Musée d’Orsay have piqued your interest, head over to the beautiful bohemian village of Montmartre – the heart of Paris’s creative landscape. It was once home to some of the most brilliant minds of the 19th and 20th centuries: Picasso, Renoir and Van Gogh all lived here. This tour will take you through Montmartre via windmills, cabarets and monuments including the Sacré-Cœur Basilica. Your guide will even pick you up from your hotel!

See classics in a new light at L’Atelier des Lumières 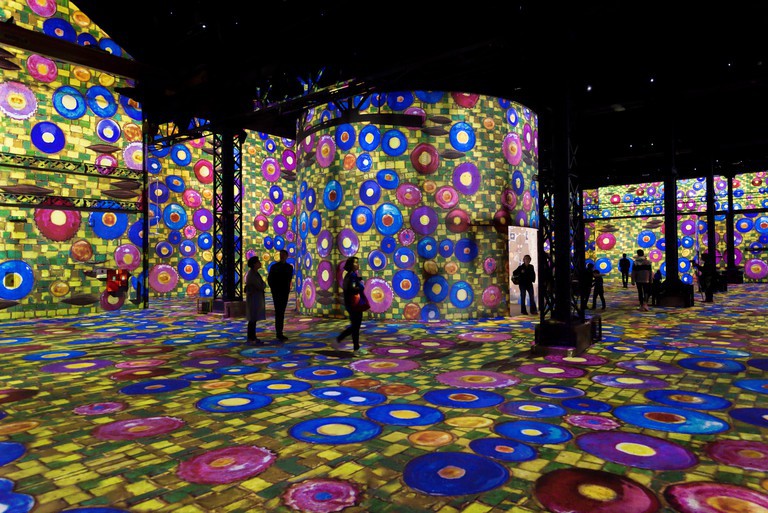 For a fascinating blend of technology and tradition, you must visit L’Atelier des Lumières on the Rue Saint-Maur. Causing a storm of excitement in the art world, the exhibitions at L’Atelier des Lumières invite you to immerse yourself inside huge digital installations of legendary works by Vincent van Gogh, Gustav Klimt and more. Stroll around the landscape of The Starry Night, which is created using over 120 video projectors across 3,300 square metres, covering the floors, walls and ceilings in colour. It’s a truly unique way to experience these masterpieces (just remember to book online in advance).

Enjoy the view at Georges 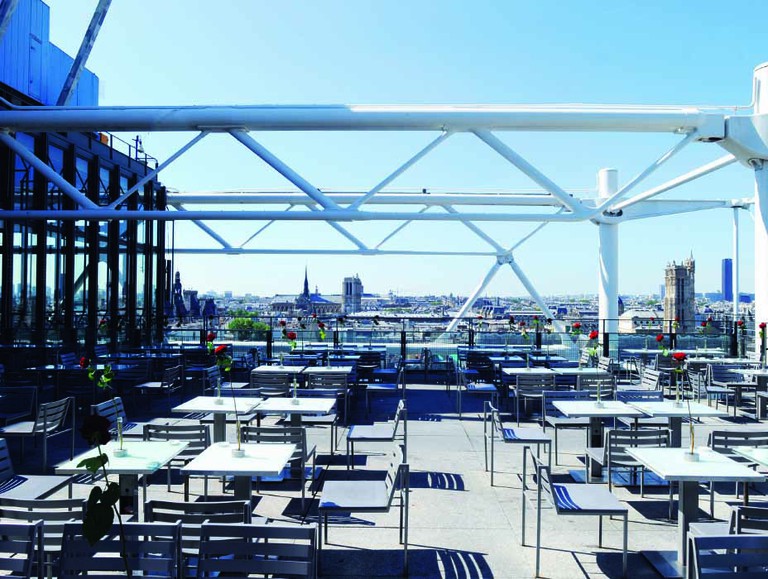 Georges sits atop the Centre Pompidou | Courtesy of Georges
Book Now
Once you’ve explored the collections of art, literature, sculpture and photography in the Centre Pompidou, head to the top floor for an upscale dining experience. Perfect for art lovers, Georges gives you the chance to dine inside one of Paris’s most renowned cultural sites and offers incredible views of the city while you eat. With a dress-to-impress kind of atmosphere, Georges presents a high-end classic French menu that’s sure to impress gastronomes. Although the prices are fairly high, especially when it comes to the fine wines, this restaurant is well worth a visit. 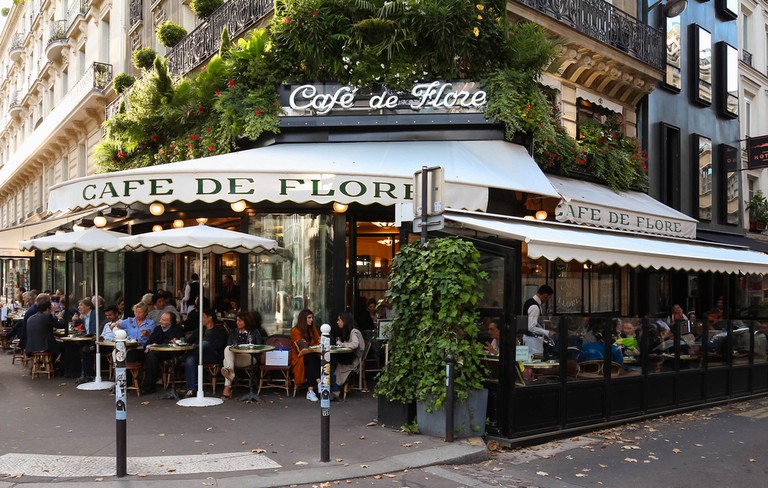 In its history, the Café de Flore has attracted writers, philosophers and appreciators of the two | © Petr Kovalenkov / Shutterstock
If classic Parisian bistro culture is more your vibe, Café de Flore is steeped in French literary and art history. This beautiful café used to serve the cultural elite, including Pablo Picasso. Most famously, Simone de Beauvoir penned her 1945 novel, The Blood of Others, at one of its tables over her regular breakfast! Café de Flore serves traditional, reasonably priced food from breakfast to dinner; take a seat at one of the outdoor tables and indulge in croissants and coffee as the hustle and bustle of Paris around you provides plenty of artistic inspiration.

Stay up all night at Au Pied de Cochon 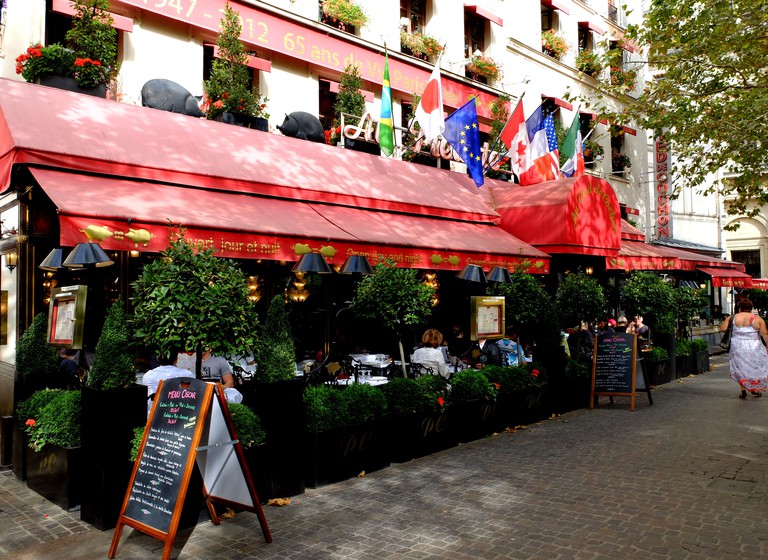 Sleep in a painting at Hôtel Le Bellechasse 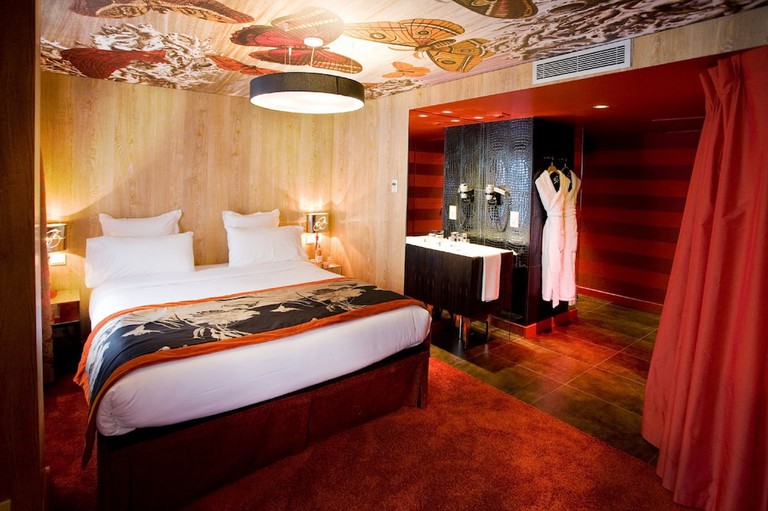 Close to the Musée d’Orsay, Hôtel Le Bellechasse is a four-star hotel full of bohemian, creative character – ideal for art enthusiasts. Its 33 rooms, designed by Christian Lacroix, are bursting with colour and creativity. Each room is different, with one decked out in orange-and-black pinstriped walls and one featuring murals depicting ancient cityscapes. There’s even a relaxing nature-inspired suite that has a ceiling swathed in butterflies. 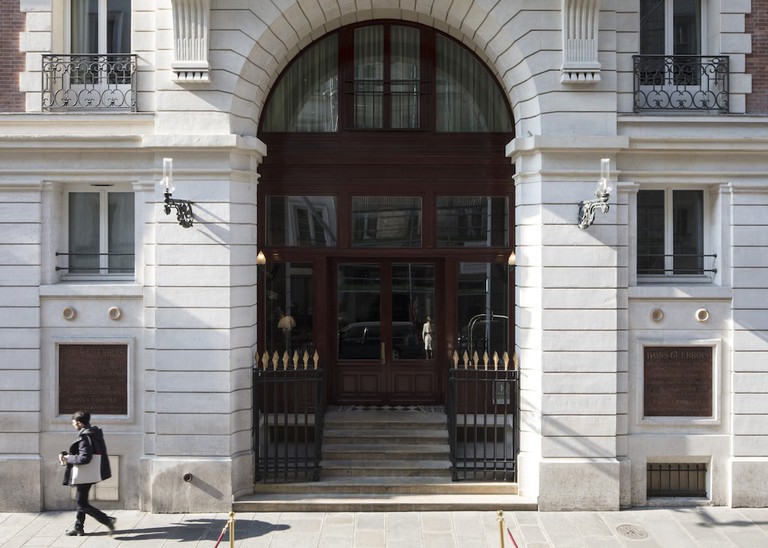 Embracing everything from New York-style graffiti in its murals to the architecture of its 19th-century Haussmann building, Les Bains has a rich creative history that flows through the hotel’s aesthetic. First a bathhouse and then a legendary nightclub, which counted David Bowie, Mick Jagger and Jack Nicholson as patrons, Les Bains is now a 39-room, adult-only hotel that houses a variety of artworks. At Les Bains, you’ll discover everything from sculptures to fine art among the flamboyant, opulent interior decor.

Immerse yourself in art at Amastan Paris 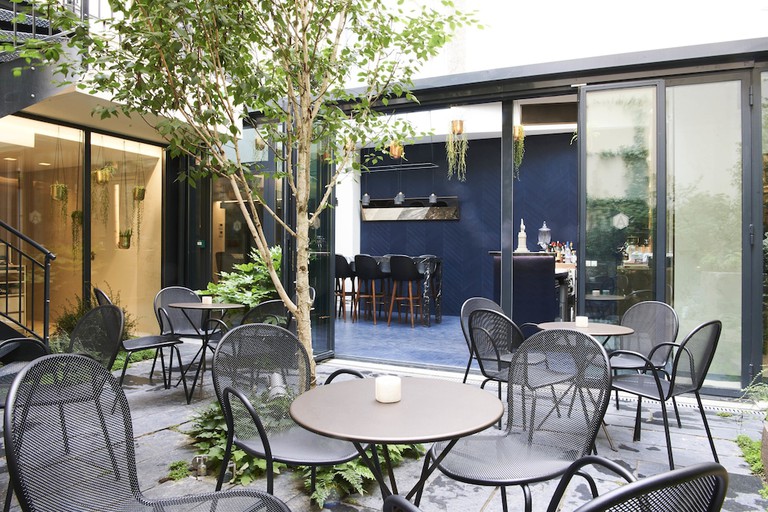 Centrally located, minutes from the Champs-Élysées, Amastan Paris’s stylish design and creative focus is reflected in its on-site gallery and dedicated pop-up space. Hang out in the jasmine-scented courtyard garden or venture out into the city via the Saint-Philippe-du-Roule Métro station just a three-minute walk away – which is right next to Avenue Montaigne, the designer shopping centre of Paris.