Check Out Paris' Top Starchitects and Their Signature Designs 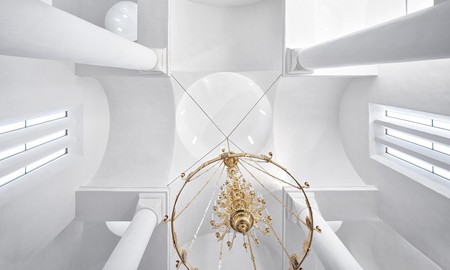 Forget any notion you have that all there is to see in Paris are swathes of Haussmannian apartment buildings and a handful of iconic monuments (that tower, those archways, that cathedral with its gargoyles). Over the past few years, these five leading Parisian architecture firms have given the capital some of its most remarkable buildings that require your immediate attention. 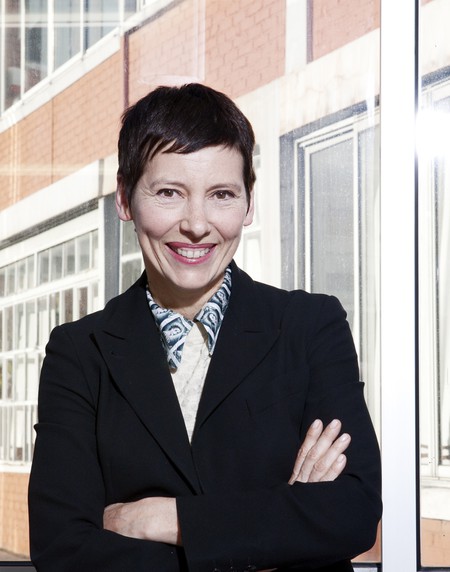 Signature style: Since she opened her practice in 1991, Gautrand has refused to be locked into a single architectural style. Instead, she and her team of 15 architects create what can only be described as poetic architecture, which embraces varied forms and colors, employs cutting-edge techniques, and engages with a range of projects.

Paris projects: When it was completed in 2007, the Citroën flagship showroom on the Champs-Élysées, nicknamed C42, was the first new arrival on the avenue for 30 years. The €13-million building’s complex geometric glass and steel façade took five months to assemble. In 2016, the firm finished the €12 million renovation of the Cinéma Gaumont Alésia, a project that successfully revived both the 14th arrondissement building and the company’s brand.

What they say: “For me, architecture is what poetry was to Saint John Perse: ‘the luxury of being unaccustomed.’ At the core of the process of creativity lies the approach to each new project through the spirit of ‘blank page,’ with no a priori. The project must each time become a unique and symbolic encounter between the site and the program.” 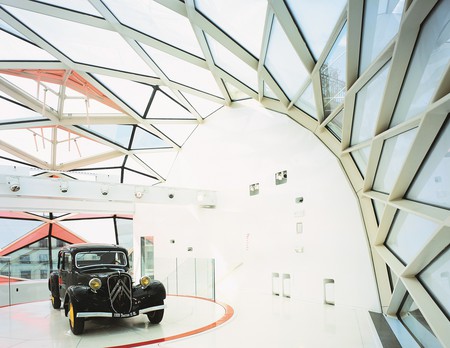 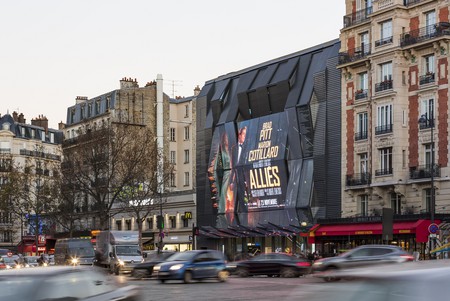 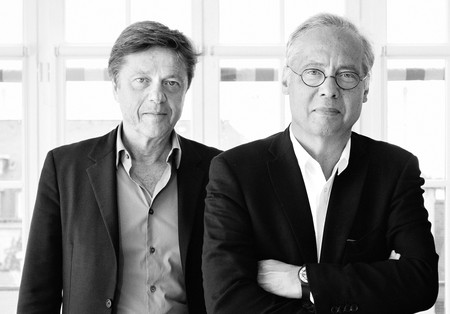 Signature style: Friends for over 40 years, Denis Valode and Jean Pistre founded their agency back in 1980. It has since created 150 buildings, structures, and spaces in 35 countries, with the help of 200 architects of 30 nationalities. Impressive figures, indeed. They practice contextual architecture, meaning their work responds to its surroundings by respecting what is already in place. The design is rooted in substance, not appearance, and beauty is derived from functionality.

Paris projects: The Beaugrenelle Shopping Center won the Pierre d’Or 2014 in the Programme category, with the jury and voters praising the project’s expert delivery. The building was inspired by the Parisian department stores of old, with oval atria and colorful skylights, though it’s completely modern from its sleek, white interiors to the metallic mesh of its curved glass façades. In 2006, they brought the former wine warehouses of Bercy Village to life and added new ones, featuring long, pleated zinc roofs that blend perfectly with the old.

What they say: ‘We are interested in creating buildings that could never have got off the ground somewhere else. Architectural design thus has another meaning, it has roots.’ 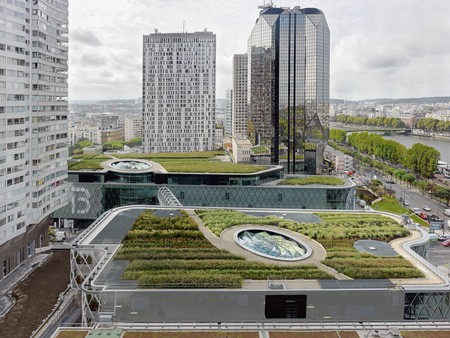 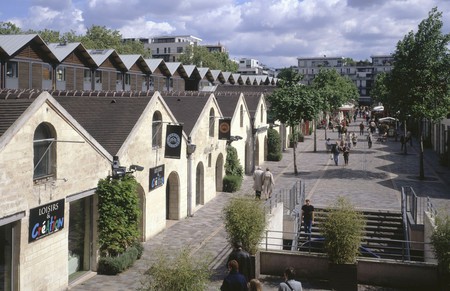 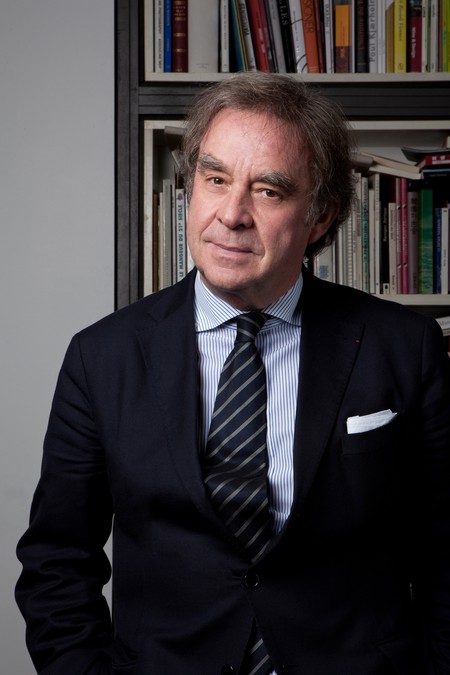 Signature style: Founded in 1975, Jean-Michel Wilmotte’s practice is international, multicultural, and multinational, with offices in France, the United Kingdom, Italy and South Korea. Whatever the team of over 230 architects, urban planners, designers, museography specialists and interior designers are working on, their innovative and sustainable approach emphasizes landscaping, lighting, materials and finishes, and respects the site’s local and historic context.

Paris projects: The Russian Orthodox Spiritual and Cultural Center, which occupies the site of the old Météo France headquarters on the Right Bank of the Seine, close to some of Paris’ most visited attractions, was inaugurated in October 2016. The cathedral’s pure and minimal design, which incorporates Bourgogne stone and five matte gold domes, helps make it a radiant new focal point in the neighborhood. When it will be finished in 2017, Station F will also transform its corner of the 13th arrondissement. The vast, pre-stressed concrete structure of the Halle Freyssinet is being converted into the world’s largest startup hub. 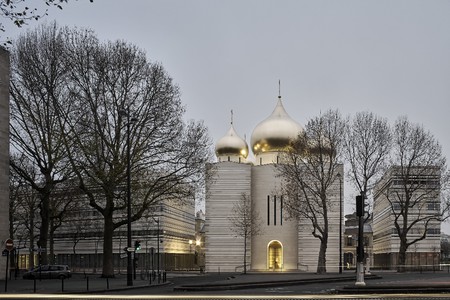 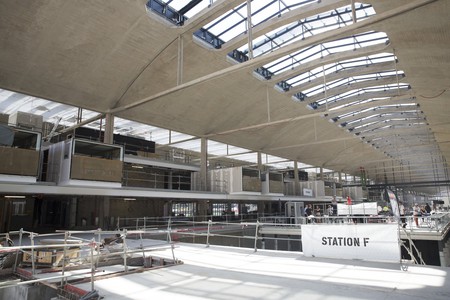 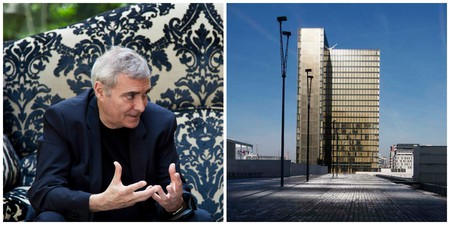 Signature style: Dominique Perrault founded his firm in 1981 and was catapulted to fame in 1989, when he was chosen to design the Bibliothèque nationale de France, the last of President François Mitterand’s Grands Travaux. His work, driven by theoretical and aesthetical innovation, is contemporary and utilizes unexpected materials and surfaces.

Paris projects: The Bibliothèque nationale de France, though not to everyone’s tastes, is unquestionably one of Paris’ most memorable buildings. Its four 79-meter (260-feet) high towers, shaped like open books, rise above a sunken, forested courtyard on a stretch of the Seine that has been regenerated since the library was finished in 1995. Later this year, the redesigned Longchamp Racecourse in the Bois de Boulogne will be unveiled. According to Perrault, ‘the architecture of the stand is in motion, like a galloping horse.’ This starchitect will also be at the helm of a 25-year remodeling of the Île de la Cité. Let’s hope he has the stamina! 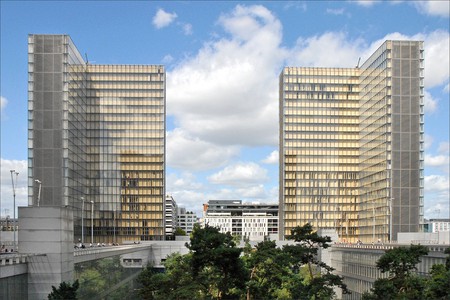 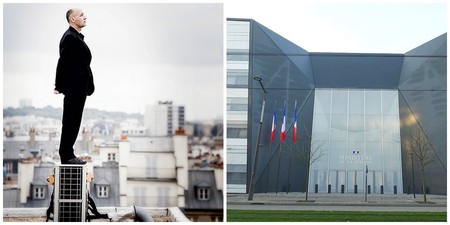 Signature style: Since ANMA was founded in 2000, its leaders, Nicolas Michelin, Michel Delplace, and Cyril Trétout, have created buildings and urban environments that draw strength from existing elements, that utilize light, economic and sound solutions, promote energy-saving systems, and that are open to future possibilities.

Paris projects: The Ministère de la Défense – Balard, finished in 2015, covers a total area of 420,000 square meters (0.17 square miles) of new or renovated buildings. It main roof, which is best viewed from the hot air balloon in the Parc André Citroën, is reminiscent of a stealth combat aircraft, while its three towers symbolize the French army, air force, and navy. Between 2004 and 2006, the firm transformed La Halles aux Farines, an old flour store constructed in 1950 by Denis Honegger, into a campus building for the University of Paris VII-Denis-Diderot.

What they say: “We have a consistent approach based on five strong ideas: ultracontextuality, lightness, ‘natural’ energy savings, adaptability, and the extraordinary ordinary.” 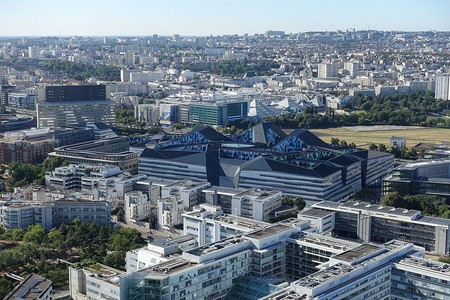 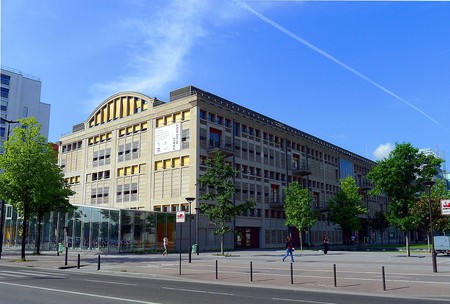