Marc Chagall was both a modernist master, one who fused Cubism, Symbolism, and Fauvism and laid the groundwork for Surrealism, and the most significant Jewish artist of the 20th century. During the three periods of his life in which he lived in France, he produced remarkable paintings, illustrations, stained glass windows, stage sets, ceramics, tapestries, and prints. Still, it is his understanding and use of color that set him apart.

Chagall came to Paris from Russia in 1910 in order to grow as an artist. James Johnson Sweeney, an art historian and once curator at MoMA and the Guggenheim, described the 23-year-old as having ‘a ripe color gift, a fresh, unashamed response to sentiment, a feeling for simple poetry and a sense of humor.’ This attitude put him at odds with the Parisian painters of the time, and he instead found his niche with the poets Guillaume Apollinaire and Blaise Cendrars. 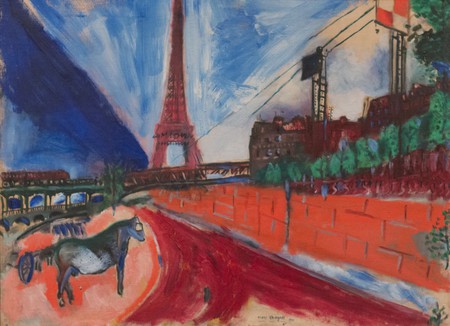 Despite his initial loneliness and struggle with the French language, Chagall fell in love with the city that he had so long dreamed of visiting. Of his time based in the artistic community of Montparnasse, he said: ‘I aspired to see with my own eyes what I had heard of from so far away: this revolution of the eye, this rotation of colors, which spontaneously and astutely merge with one another in a flow of conceived lines. That could not be seen in my town. The sun of Art then shone only on Paris.’

Soon after returning to Paris from Moscow after the First World War, Chagall established himself in the country’s art world. This fact was confirmed by his inclusion in Maurice Raynal’s 1927 book Modern French Painters.

Chagall traveled frequently in France during this time, particularly along the Côte d’Azur. Here, he found landscapes, vegetation, and colors that were foreign to him. He wrote later in his life that ‘there, in the south, for the first time in my life, I saw that rich greenness – the like of which I had never seen in my own country.’ 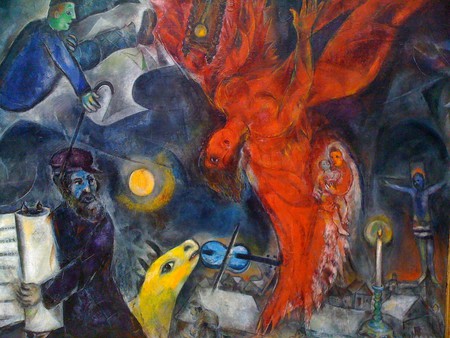 One of the artist’s major projects from this time is his illustration of the Old Testament. For inspiration, he traveled to Palestine in February 1931 and stayed for two months. By the onset of the Second World War, 66 of the 105 envisioned plates had been completed and it was finally finished in 1956.

In 1937, the Nazis began systematically demeaning and destroying modernist art. Chagall’s work, which had once been praised in the German press, was dismissed as ‘green, purple, and red Jews shooting out of the earth, fiddling on violins, flying through the air… representing [an] assault on Western civilization.’

Chagall’s realization of the Nazi threat and escape from Vichy France came just before it was too late. He fled through Marseilles as part of a mission to smuggle artists and intellectuals to the United States.

After his second return to France, Chagall settled in Saint-Paul-de-Vence, a famously artistic suburb of Nice. Matisse lived nearby and Picasso was further down the coast in Vallauris. While never close friends, there was immense respect among the artists. Picasso once confided in his mistress Françoise Gilot: ‘When Matisse dies, Chagall will be the only painter left who understands what color is… Some of the latest things he’s done in Vence convince me that there’s been nobody since Renoir who has the feeling for light that Chagall has.’ 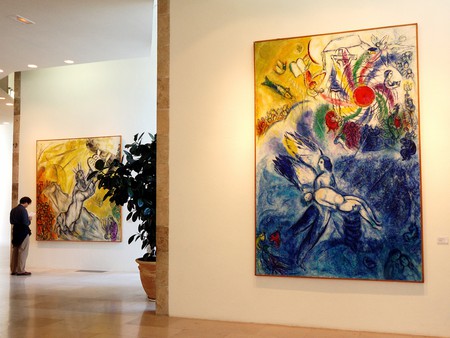 In 1963, Chagall was commissioned by André Malraux, then the French Minister of Culture, to paint a new ceiling for the Opéra Garnier. Many vociferously opposed his appointment, given his Russian and Jewish heritage, prompting Chagall to comment: ‘It is amazing the way the French resent foreigners. You live here most of your life. You become a naturalized French citizen… work for nothing decorating their cathedrals, and still they despise you. You are not one of them.’ 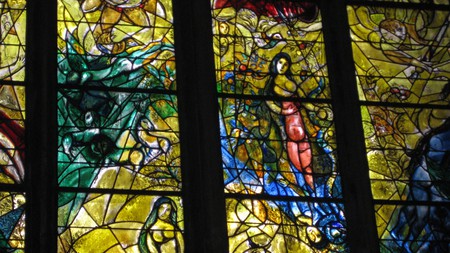 One of three stained glass windows at the Cathédrale Saint-Étienne, Metz, installed between 1958 and 1960 │ | © Luc Galoppin

Regardless, the artist took a year to complete the 2,400-square-foot canvas, applying 440 pounds of paint in order to create his tribute to the great composers, actors, and dancers that the opera had known. The ceiling’s dramatic unveiling to an audience of 2,100 on the last bars of Mozart’s Jupiter Symphony brought rapturous applause and silenced critics. Speaking on that night in September 1964, Chagall said: ‘I offer this work as a gift of gratitude to France and her École de Paris, without which there would be no color and no freedom.’ 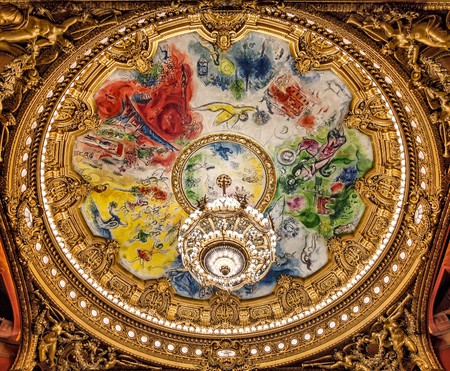 Chagall died in his home in Saint-Paul-de-Vence on March 28th, 1985. He had spent the evening deliberating which colors to use for the final version of a tapestry. For the greatest colorist of the century, there couldn’t have been a more fitting last act.