Brassaï: The Eye of Paris and his Hungarian Soul 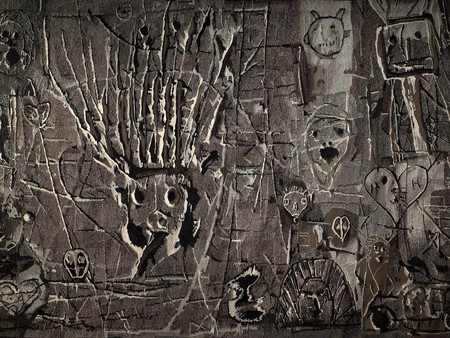 Nicknamed by Henry Miller as ‘the eye of Paris’, Brassaï is regarded as one of the fathers of street photography and known for his unconditional, inspired love for the City of Lights. Portrayed in powerful night shots depicting its soul and most quirky dwellers, the Paris of the 1930s features in the Hungarian artist’s work alongside his graffiti shots and portraits, rewarding him the title as one of the great photographers of the 20th century. 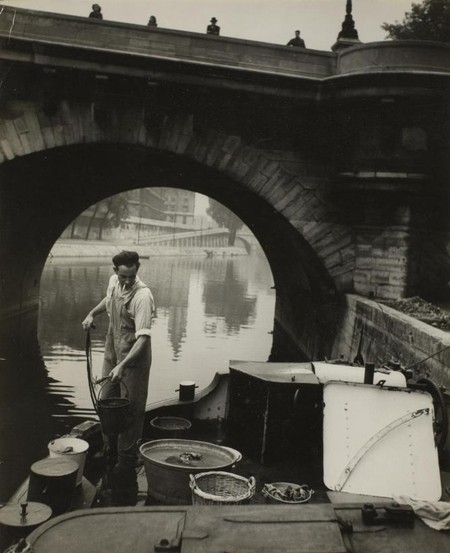 Fisherman Along the Seine, 1930/49. Gift from Leslie Stone Douglass | Courtesy of The Art Institute of Chicago

The early life of Gyula Halász

Born in 1899, Gyula Halász was Hungarian by origin, as his hometown of Brassó, Transylvania (now Brașov, in Romania), was then part of the Austro-Hungarian Empire. The son of an Hungarian father and Armenian mother, the young Halász was raised in Brassó, but also spent some time in Paris with his family as his father, a professor of French literature, held a teaching post at the Sorbonne for one year. As a young man, Halász went on to study painting and sculpture at the Hungarian Academy of Fine Arts in Budapest. Having later joined the Austro-Hungarian army, he served in a cavalry regiment until the end of the First World War, and in 1920 he moved to Berlin to work as a journalist and further train at the Academy of Fine Arts at the Charlottenburg campus. 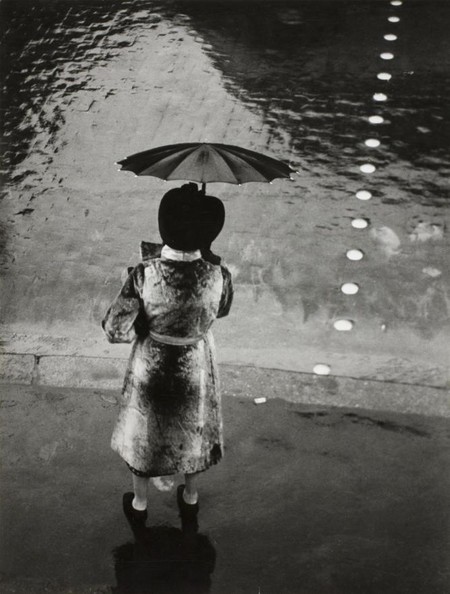 The Move to Paris

1924 was the year of Halász’s move to Paris and marked a turning point in his life and artistic career. It is indeed here that he will spend the rest of his life, become acquainted with the means of photography, and subsequently take the name of Brassaï, by which his work will become internationally acclaimed. When Halász first arrived to the French capital he took a job as a journalist, yet he gravitated around the neighborhood of Montparnasse and its lively population of young artists. His artistic interests were at this stage directed towards painting, drawing, and sculpture, and it was during this time that he befriended artists and writers like Pablo Picasso (1881–1973), Joan Miró (1893–1983), Salvador Dalí (1904–1989), Henry Miller (1891–1980), and Jaques Prévert (1900–1977), many of whom are portrayed in his collection The Artists of My Life, published in 1982.

The Encounter with Photography

At first regarding the camera with a hint of scorn, when he approached photography, Halász’s intent was to produce some additional material to include in his articles. Soon afterwards however, encouraged by the work and influence of Andre Kertesz (1894-1985), a photographer friend in his Hungarian circle, Halász began to appreciate the qualities of photography as an artistic means and gradually fell in love with the medium and with what became his primary subject: Paris. Camera in hand and equipped with a pseudonym based on his birthplace, Brassaï (meaning ‘from Brassó’), began wandering the streets of Paris, especially at night, partly seeking documentation for his job, but mainly following his newly found passion. 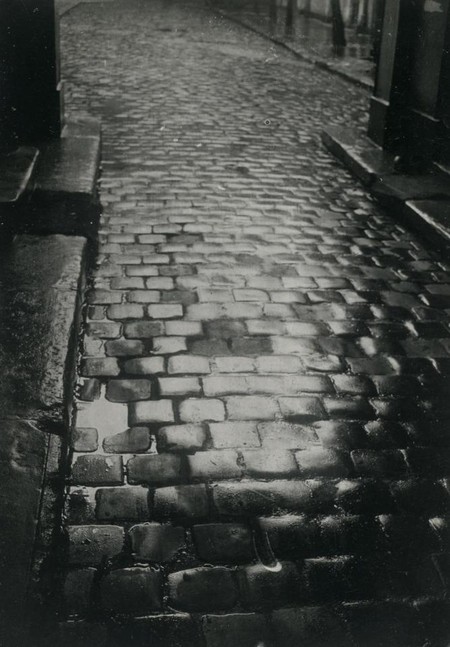 Pavés Parisiens (Parisian Paving Stones), 1929. Restricted gift of Anstiss and Ronald Krueck in honor of the birth of Angelica Catherine Evan-Cook | Courtesy of The Art Institute of Chicago

A Photographer’s Love for the City of Light

Brassaï’s love affair with the city started at Montparnasse. Regarded as the pulsating heart of art in Paris, the district was also known as one of its most colorful ones, its night-time population a kaleidoscope of petty criminals, hoodlums, streetwalkers and pleasure seekers. Roaming around deserted streets after dark, Brassaï would walk empty pavements enveloped in the shadows of lonely monuments, shooting powerful night portraits of the Paris underbelly, and capturing characters who would only emerge in the hours of darkness. A collection quirky personas, gloomy roadsides and dim bistros, Brassaï’s first project seized the essence of nocturnal Paris in a series of grainy, textured pictures which set the basis for early street photography. Published in 1933 with the title Paris de nuit, this portfolio was widely lauded and is now regarded as a classic in the history of photography. In 1935, Brassaï gained international recognition with a second volume, Voluptés de Paris, also dedicated to the peculiar cast animating Parisian nights. The photographer’s love affair with the City of Light indeed reached its climax in his night photography, but also evolved beyond his night-time shots. Soft foggy lights and the tones of rainy days emerge in pictures of the Rue de Rivoli, seizing the soul of the city and of the people inhabiting it. Like a promenade along the streets of the city that charmed and adopted him, the volume For the Love of Paris is a recent collection of Parisian shots that walks readers through the Paris of Brassaï. 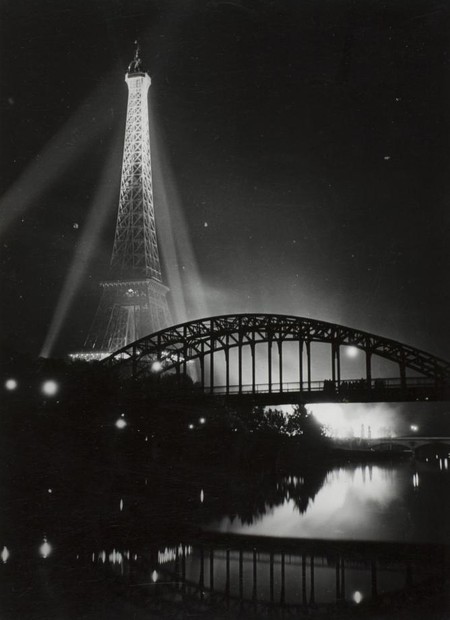 Graffiti and the War

One vastly influential work by Brassaï is his series of photographs depicting murals and ‘graffiti’, also shot in Paris. Driven by a strong interest in how graffiti, wall carvings and markings morph and transform – both at the hands of later artists and the passage of time – Brassaï wandered the streets of Paris taking pictures that would document the transformation of the city’s graffiti. One example is the case of a double-barred cross of Lorraine, a counter-symbol of the Nazi swastika, first painted on a wall presumably during the German occupation of Paris, then painted out, and subsequently reemerging at the time of France’s liberation, the stage at which Brassaï captured it. Works in this series were later collected in the volume Graffiti (1961).

After the outbreak of the Second World War, when the German army occupied Paris, Brassaï briefly escaped to the south of the country, but returned to the capital to rescue some negatives that he had hidden there. However, as photography on the streets was prohibited during the occupation, this period marked for Brassaï a turn towards drawing and sculpture. Drawings from this time were collected in a volume with a poem by Jacques Prévert and published as Trente dessins (1946) after the end of the war. The liberation also signaled Brassaï’s return to photography and to the themes he had been devoted to in pre-war times. 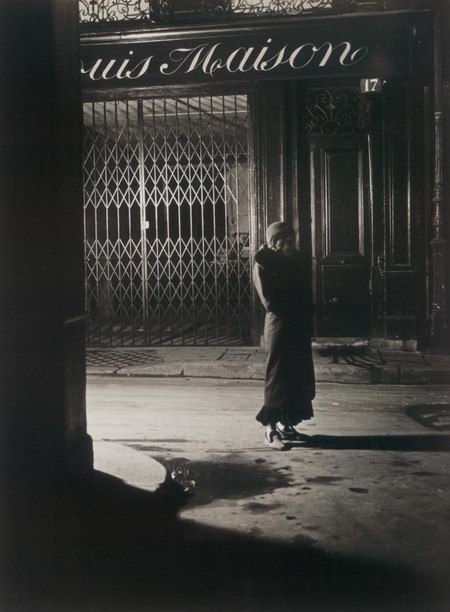 Untitled, 1932. Restricted gift of Leigh B. Block | Courtesy of The Art Institute of Chicago

Widely acclaimed both for his artistic and commercial work, taking photographs for the American Harper’s Bazaar and a founding member of the French Rapho agency, Brassaï received a number awards and honors throughout his life, including his investiture as Chevalier de l’Ordre national de la Legion d’honneur in 1976. He has also been the subject of many retrospective exhibitions, some of the most recent being Brassaï: The Soul of Paris in Paris and London, and Brassaï: The Eye of Paris, held in Houston, Los Angeles and Washington DC. This Hungarian master of photography and his legacy live on in books, shows and, most importantly, on the ever-inspiring streets of Paris.