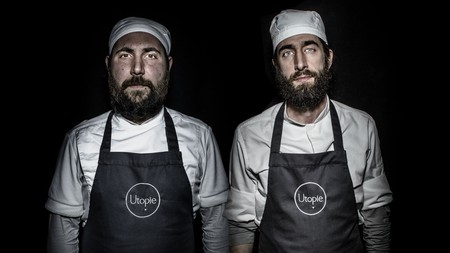 In a city with 30,000 bakeries, Paris’s Boulangerie Utopie, co-founded five years ago by friends and bakers Erwan Blanche and Sébastien Bruno, manages to stand out. The République bakery’s return to traditional techniques and range of delectable, creative products has allowed it to become a successful one-stop shop. 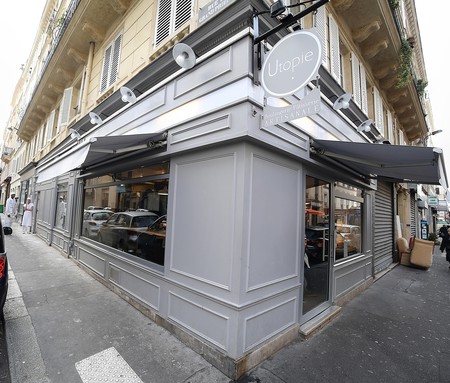 In France today, it’s surprisingly rare to find a bakery that makes both excellent bread and excellent pastries. After all, bread-baking (boulangerie) and pastry-making (pâtisserie) are two separate career options in France, requiring different training programmes. It’s unusual for one person – and one shop – to fully master both.

This did not go unnoticed by Boulangerie Utopie co-founders Erwan Blanche and Sébastien Bruno, who first opened their bakery in Paris’s République neighbourhood in 2014. “We saw, here in Paris, that there were people – including us! – who went to buy their bread in one bakery, their viennoiseries (French baked goods) in another, and then their pastries in another,” recounts Blanche. “And we thought… wouldn’t it be cool if you could have one spot, one bakery, where you could find all sorts of simple, high-quality products?” 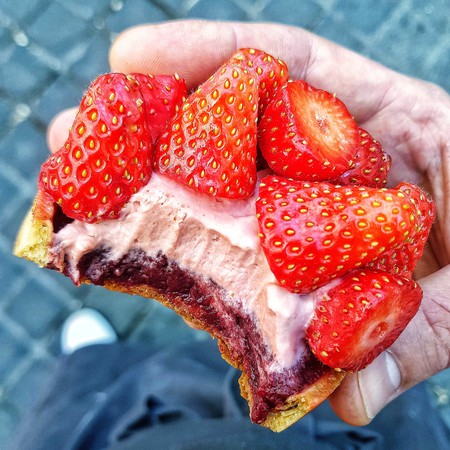 The pair’s focus on a range of products incorporating exceptional ingredients and time-honoured techniques might seem like a no-brainer, but it stands out from many Parisian bakeries today. Despite appearances, numerous boulangeries in Paris that look traditional on the outside are, in reality, using industrial methods and non-raw materials. This change has happened gradually over a number of decades: industrialisation began taking hold in the French bread-making community post-World War II and, by the 1980s, science had a heavy influence on the process. Labs even got involved, and it was discovered that various enzymes could be added to dough in order to help standardise and stabilise it. 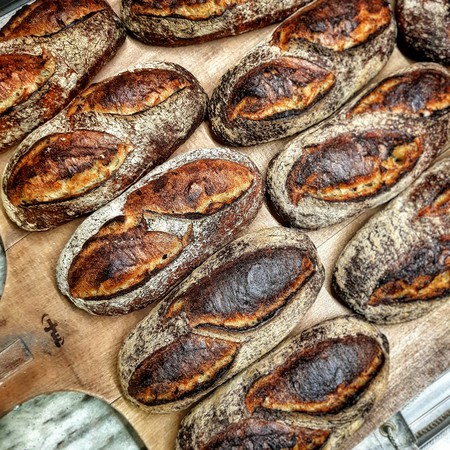 In a bid to restore high-quality standards in France’s boulangeries, the French Bread Decree was passed in 1993. This established rules for what could – and could not – be dubbed ‘traditional’ bread. But despite this mandate, industrial breads and pastries still reign in Paris. In fact, French radio station Europe 1 reported that 1,200 small bakeries in France close every year, in large part due to the availability of relatively inexpensive supermarket bread.

Today, many bakeries in Paris still cut corners, and sources estimate that somewhere between 50 and 80 percent of croissants sold in Paris are of industrial origin. With bread consumption falling in France – today, the country consumes about 120 grams per person per day, a third as much as in 1950 – newer bakeries have turned, instead, towards a more modern brand identity. This often means a one-item specialisation – cream puffs at Odette, macarons at Pierre Hermé, even doughnuts at Boneshaker – coupled with a higher price point. 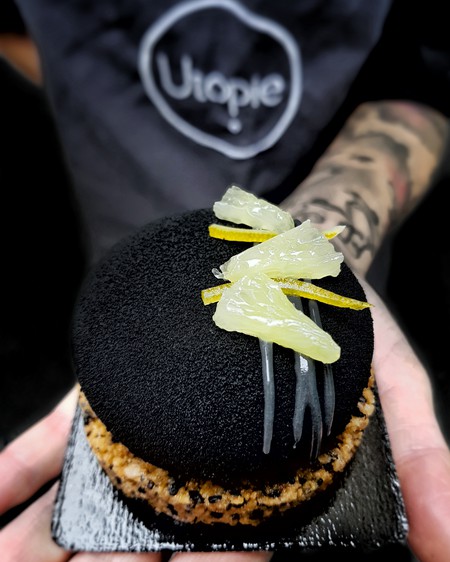 But Blanche and Bruno have decided to eschew this trend. On any given day, a queue can be seen leading out the door of Boulangerie Utopie, filled with people stopping by for a baguette, a sandwich, or a morning croissant. From the outside, the shop might appear unremarkable, but look a little closer at the products on display, and a few unique features stand out. Alongside regular baguettes, there might be a striking black baguette de tradition made with activated charcoal; next to the croissants and pains au chocolat lies a black sesame swirl morning bun. The bread shelves feature not just wheat-flour loaves, but ancient grains and buckwheat, and between a beautiful strawberry tart and a thick slice of vanilla flan pâtissier might sit a shiny purple cassis and hibiscus tartlet. 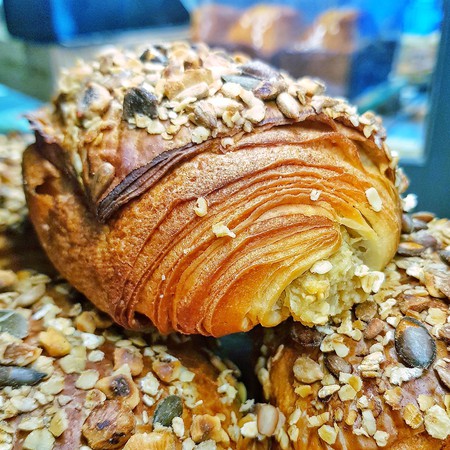 These unique creations were an essential element of the very dream Blanche and Bruno set out to make reality. “Seb and I are very creative,” says Blanche, “That’s really our strong suit. We love it. We love to test new pairings.” With their bushy beards and hipster appearance, you might expect the duo to be baristas at a third-wave coffee shop, but these young bakers have the specialist training and technical prowess necessary to have made their dream a reality. After meeting 20 years ago in pastry school and working side-by-side at macaron giant Ladurée, the two friends’ aspiration was to go it alone and create a bakery that, Blanche says, “resembled” them. “We really wanted to be on our own, no investors,” he says. “That way, we could really be free to do what we wanted.”

But choosing a space for their project wasn’t easy. They finally found a little spot tucked away on rue Jean-Pierre Timbaud, a few blocks from Place de la République, where a bakery called Charlot had previously stood – better known for its industrial Banette baguette than for anything surprising or innovative.

“The location wasn’t amazing,” admits Blanche, “but we thought it was pretty.” In fact, the foodie-focused 11th arrondissement, which is home to a veritable panoply of trendy restaurants catering to the neighbourhood’s ever-growing hipster population, is the perfect location for the innovative bakery. “We didn’t want to be trendy,” Blanche notes. “We just wanted to be a little local shop, doing things properly, and allowing people to see something new when they came to us.” 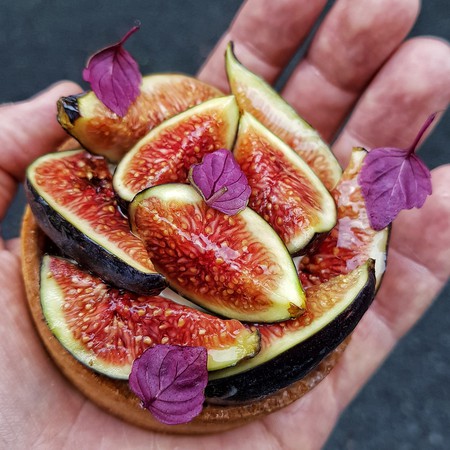 The flavours here may be creative, but Blanche suggests that the most important element of the bakery’s success – and the reason for the line out the door in the middle of the week – is the importance placed on a return to classic bakery techniques, he says. “It might seem like nothing, but it really matters to make everything ourselves, to make it properly, to make high-quality products and all the while keeping prices reasonable.”

“Of course, we each have our preferences, but both of us are able to make bread, to make pastries, and to make viennoiseries. Or even to sell them,” says Blanche. “When we first started out, there were so few of us – just one saleswoman – so we baked all night and sold all day. There was no way we could say, ‘I’ll make the bread,’ or ‘I’ll make the pastry, because I like to.’ That was so not the point.” While today, Bruno and Blanche rely on a larger staff of bakers, they are still both able to make every item on their ever-changing menu.

The layout of the shop itself brings a wonderful proximity between baker and patron. “We liked that there was this opening into the back, so clients could see how we work.” Indeed, clients queuing for Boulangerie Utopie’s signature breads and pastries can watch as staff bake batons of crusty baguette and country loaves right behind the register.

The proof of the duo’s wide-ranging success is in the variety and number of customers that frequent Boulangerie Utopie. And while Boulangerie Utopie is well known for its unique pastries, the bakers also ensure that the basics are of the highest quality. One of their best-sellers remains a simple loaf dubbed l’Authentique – a combination of high-quality flour, sourdough starter, Guérande sea salt, and water. “It’s a super simple product, but one that people really love,” says Blanche. 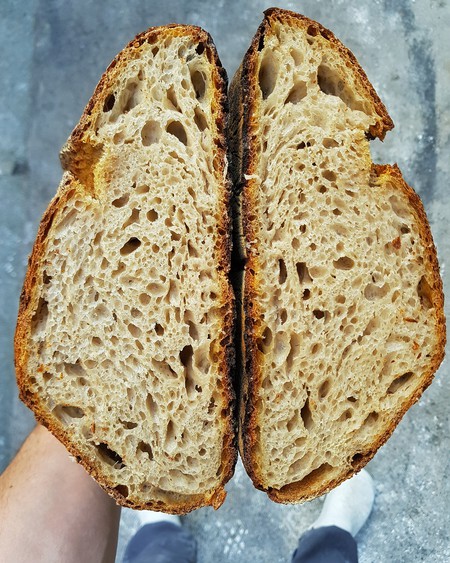 Perhaps the most telling element of this bakery’s unique position between old and new-style boulangeries is its commitment to the Parisian baguette (a kind of bread that predates the now-common baguette de tradition and which uses a more refined wheat flour and a closer crumb). While many modern, upscale bakeries have foregone this old-school offering entirely, opting instead to sell only the artisanal baguette de tradition, Blanche notes the importance of retaining both on his bakery shelves. “Not only because it’s the Parisian baguette, and we’re in Paris,” he says, “But also because it’s less expensive. People opt for a Parisian baguette for financial reasons. So people can still buy their bread here for under a euro.” By contrast, the baguette de tradition usually retails for about €1.40 (£1.20). 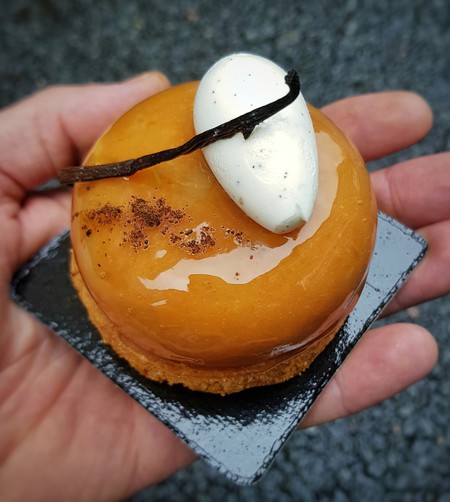 Blanche has an endearing humility that extends to the recognition the bakery has garnered, both around République and beyond. In 2016, the bakery was named best in France by French television station M6, but at the mention of other competitions, or other prizes, he just shrugs. “We’re not that into contests,” he says, before admitting, “It’s kind of fun, I guess.”

Rather than awards, it is above all their belief in the quality of their products that keeps this team going. After all, it’s what inspired the name of the project – utopie, or utopia – in the first place. “When we first started looking for a shop, and we said: ‘We want to do 100 percent homemade, make high-quality, affordable products; we only want to work with levain (sourdough)…’ no one took us seriously,” Blanche recalls. “They said, ‘Don’t you see? That’s all impossible.’ For them, it was like something out of a fantasy.” Blanche looks around at his own fantasy made concrete, his little utopia in the heart of the 11th arrondissement. “Well… we did it.”