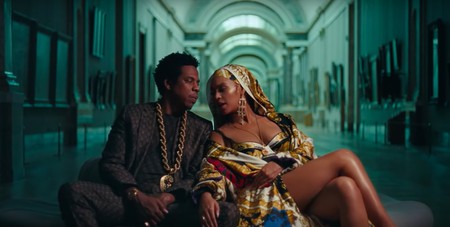 Powerhouse couple Beyoncé and Jay-Z have released the video for ‘Apeshit’, which cleverly subverts Western art as they take over the Louvre in Paris.

It’s the first ever joint album from the Carters, but Beyoncé and Jay-Z decided to place another couple on the cover of Everything is Love.

The album artwork features two of Beyoncé’s dancers, Jasmine Harper and contortionist Nicholas ‘Slick’ Stewart, both of whom have appeared on US reality TV show So You Think You Can Dance.

In the touching photo, Harper is seen picking out Stewart’s hair in front of Leonardo da Vinci’s Mona Lisa. It follows similar themes to photographer Deana Lawson’s work. Lawson is known for staging portraits of black couples and families in their homes, often using strangers. These shots capture black intimacy and relationships in a beautiful, candid way that isn’t often portrayed in art.

The image is a still from Beyoncé and Jay-Z’s ‘Apeshit’, directed Ricky Saiz. For the first Everything is Love video, the couple took over the Louvre in Paris.

The decision to place a tender image of a black couple in the middle of a historically Eurocentric space is a significant one. It acts as an extension of the ‘Apeshit’ video, which turns black bodies into moving works of art; Beyoncé’s dancers lie on the stairs of the Louvre before coming to life and dancing in a chain with the singer, their hips rolling in unison.

Some of the museum’s most famous artworks are seen during the video, including the Mona Lisa, The Consecration of Emperor Napoleon and Madonna with the Green Cushion – paintings that famously feature white people.

At one point the couple stand in front of the Venus de Milo, one of the most famous statues in the world. Beyoncé dances, her body graceful and constantly moving next to an artwork that remains immobile and inert.

The singer’s dance troupe also get in on the act, moving together in a line in front of The Winged Victory of Samothrace, another famous white-marble statue.

After successfully subverting these famous pieces, the video comes to an end with a shot of Portrait of a Negress.

Created in 1800, the portrait was unusual at the time not only because it focused on a black woman – a subject rarely depicted so personally – but because it was painted by a woman (Marie-Guillemine Benoist).

As the last artwork to be featured in the video, the message about female and cultural empowerment is clear. Jay-Z once rapped: ‘Put some coloured girls in the MoMA’ in 2001’s ‘That’s My Bitch’. Him and Bey have gone one better in ‘Apeshit’.

Everything is Love is the final instalment of the couple’s trilogy about marriage, infidelity and love. It follows on from Beyoncé’s Lemonade, where she revealed that Jay-Z had cheated on her, and the rapper’s album 4:44, where he apologised and begged for forgiveness. If the new album is anything to go by, it looks like they’ve put all that behind them and are stronger than ever.