Battle Of The Banks: The Rive Gauche Vs. The Rive Droite 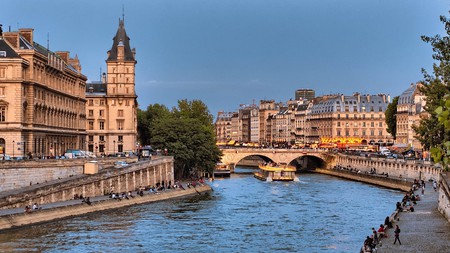 Some classification of terminology is probably necessary before going any further with this hyper-technical comparison: the Rive Gauche is the Left Bank of Paris, which is to say anything south of the Seine, and the Rive Droite is the Right Bank – you guessed it, everything north of the water, plus the islands. Which side deserves the loudest applause and screams of admiration depends on ten rounds of tough interrogation.

Round 1: Museums, galleries, and other cultural hot spots

Even if you restrict the banks to just the riverfront strips, it is still a seriously tough matchup. The Left Bank boasts the majestic Institut du Monde Arabe, the mint Monnaie de Paris, and the mighty Musée d’Orsay and Musée du Quai Branly. How can the Right Bank compete, right? Well, even if you discount the Louvre (and you shouldn’t), there is still the Pavillon de l’Arsenal for architecture buffs and its trio of dynamic duos: the Jeu de Paume and Musée de l’Orangerie, the Petit and Grand Palais, and the Palais de Tokyo and Musée d’Art Moderne. 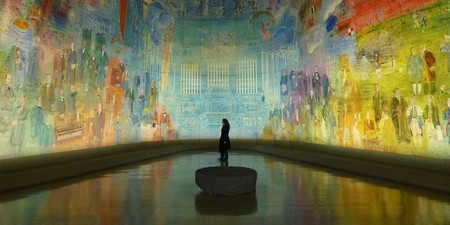 Round 2: Restaurants, cafés, and, of course, bakeries

Dining in Paris, wherever you are, is typically sensational. To choose between two equally formidable opponents, Culture Trip looked at the relative number of affordable Michelin restaurants, work-friendly cafés, and pâtisseries serving unmissable millefeuilles. Truly, this is science in action. In the latter categories, the Right Bank comes out on top. Head to the cafés of Montmartre for the best cup of joe in town and the Marais’ Le Nôtre and Carette to feast on pastries. However, the Left Bank punches above its weight in terms of high-quality, (reasonably) inexpensive restaurants, with Garance, La Truffière, and Itinéraires among the best. 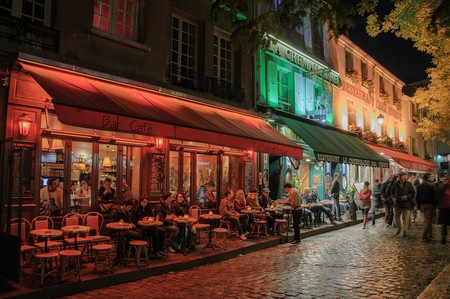 Round 3: Hotels, hostels, and other places to rest your head

Deciding to visit Paris is easy, deciding where to stay is not. This analysis of the capital’s budget, illustrious, and the best new hotels should help you out. The north has hostels aplenty, but its rival puts up an impressive fight with the Hôtel Virgina and Hôtel Auguste. Despite two incredible new destinations in the shape of COQ and OFF Paris Seine in the 13th and the Latin Quarter’s L’Hôtel, the city’s smallest five-star hotel, the Right Bank still has, by far, the greater choice of accommodation, including the refurbished Ritz and the super trendy Amastan. 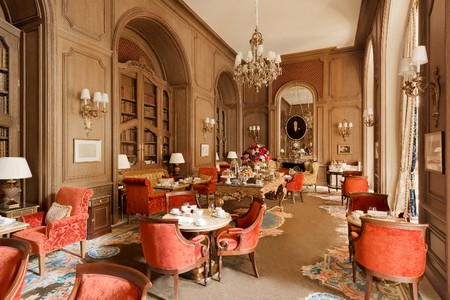 Round 4: The other H-Factor, aka hipster approval rating

Whereas the first three categories on this list were fiercely contested, this one is an absolute walkover for the Rive Droite. Nine out of the ten coolest neighborhoods in Paris, by Culture Trip’s reckoning, are to be found north of the river. Places like Bastille and the Rue Oberkampf have for years been the liveliest parts of the capital for a night out, and the Belleville and Canal Saint-Martin districts are stacked with chic bars, restaurants, and shops. In recent years, South Pigalle has emerged as a new, trendy spot and Batignolles, which is farther west, is close on its heels. 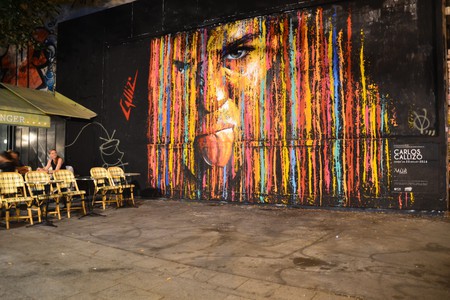 Round 5: Luxury, vintage, and concept shopping

So far, it hasn’t been looking good for the old Rive Gauche, but rest assured as the fight is coming. It begins, as perhaps you thought it might, with the question of fashion. Sure, the Right Bank has the majority of the department stores, the high-end boutiques of the Rue Saint-Honoré, and a good few designer concept stores to boot, but nothing beats a stroll along the Boulevard Saint-Germain and a (window-)shop of its luxury stores. Add to this a healthy population of vintage boutiques like Tilt and Kilo Shop, and you have yourself a style mile like no other. 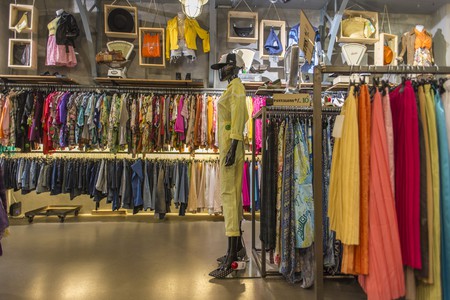 Round 6: Extreme and not-so-extreme sport friendliness

Whether your idea of sport is a game of five-a-side football or a strenuous session of hot yoga, Paris’ facilities for getting fit are pretty evenly spread across the capital. Joggers currently have the run of the place along both banks of the Seine, and the more serious among them head out of the city to the woodland parks in the east and west. So, on a knife edge, this one comes down to the bladers, skaters, and scooters. For them, the Rive Droite is the place to be, especially the Place de la République and the Trocadéro Gardens. 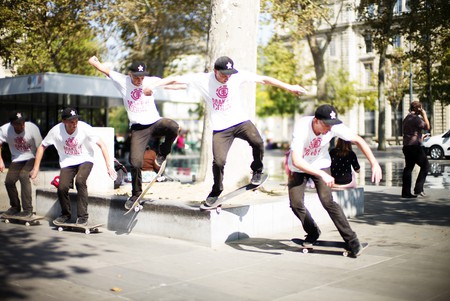 A skateboarder in the Marais │ | © Paolo Gamba

Round 7: Places for drinking, dancing, and dating

As mentioned above, a lot of the younger, cooler neighborhoods in Paris are in the north and east, but if it’s a classy glass of wine you’re looking for, possibly with some tasteful soft lighting for a romantic moment, then it’s the bars in and around Saint-Germain-des-Prés that you’re after. More animated places can be found in the Latin Quarter, especially near the Sorbonne, and the south really comes alive where the 13th arrondissement meets the Seine. Les Docks is home to the nightclubs Wanderlust and Nuits Fauves, and just along the riverfront is the city’s premier party boat, Batofar.

Round 8: Historical, architectural, and intellectual prowess

The Bastille in the north may well be the single most important site in French history, but almost all of Paris’ most historic buildings, those saved from destruction during Haussmann‘s renovations or built to commemorate great events, are located on the city’s river islands (neutral territory in our reckoning) or the Rive Gauche. The south is also home to the Sorbonne, one of the world’s oldest and finest universities, and has been a hotbed of intellectual activity for successive generations, frequented by the likes of Picasso, Hemingway, de Beauvoir, as well as Rousseau, Denis Diderot, and Voltaire before them. 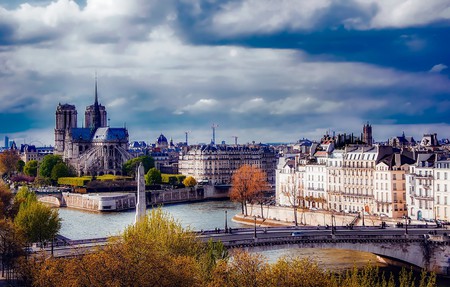 The Bois de Boulogne and Vincennes may technically be in the 16th and 12th arrondissements, respectively, but their inclusion within the city’s limits seems like a rather transparent attempt to make the capital seem greener than it is in reality. If sticking to the parks within the Boulévard Périphérique, the two sides are pretty evenly matched: the Champs de Mars and the Tuileries are both long, grassy rectangles, and the Parc Montsouris and Parc des Buttes-Chaumont offer similar sweeping vistas. The brightly planted Jardin du Luxembourg and Jardin des Plantes, however, clinch it for the Rive Gauche. 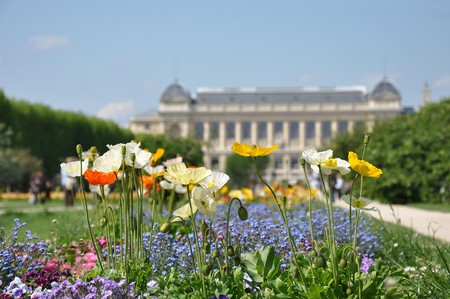 Round 10: Most likely to make you feel like you’re in a movie

Since the beginning of filmmaking, movies have been made in and about Paris. The Moulin Rouge and Pont Neuf have a dozen films to themselves, and countless people come here because they have fallen in love with the place on screen. But which side of the river will transport you into another world, fantastical like Amélie or gritty like La Haine? Which bank gets the final point? Honestly, it’s a toss-up as both have the power to take you out of yourself when you least expect it. So, in the interest of fairness, it goes to… 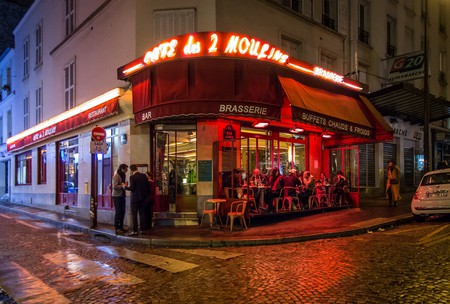