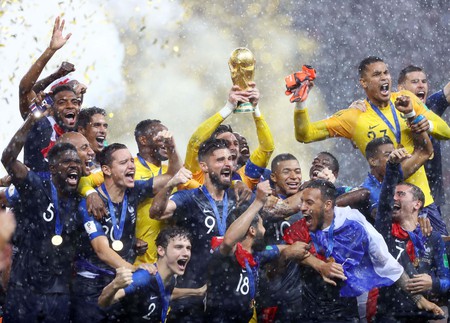 Throughout France’s journey to 2018 World Cup glory, the role played by second-generation immigrants within the team – specifically those from Paris’s neglected suburbs, or banlieues – became one of the most well-trodden narratives of the whole tournament. However, while the rags-to-riches story was a seductive one, it overlooked the wider picture of French identity.

When Hugo Lloris lifted the World Cup in the summer of 2018, fans rejoiced that the French team lived up to their promised potential. A squad blessed with talented individuals came good and won the biggest prize in football for the second time in their history.

Of the 23 players that coach Didier Deschamps selected, eight grew up in Paris’s banlieues (the suburbs around major cities in France). The banlieues are often generalised as overcrowded, run-down and crime-ridden, and while some have high poverty and unemployment rates, it’s certainly not the case for all.

Unlike the banlieues, the players in question aren’t on the fringes – they’re bona fide stars. Paul Pogba grew up in Lagny-sur-Marne, Kylian Mbappé is from Bondy and N’Golo Kanté hails from Suresnes. All three banlieues surround Paris. 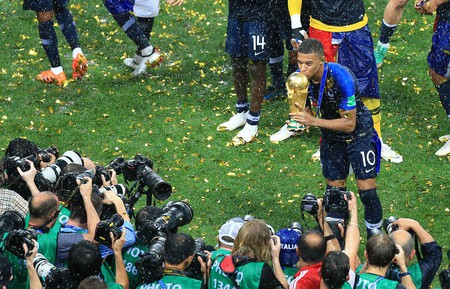 The path from poverty to sporting elitism is a common one. Paris’s banlieues, like Rio’s favelas or Dakar’s slums, are the perfect breeding ground for football talent, with concrete pitches easily set up among the high-rise apartment blocks on the outskirts of the city. However, where the sport raises young players from the suburbs of Rio, Dakar and other major cities out of extreme poverty and into football fame, the story of Paris’s players is often more nuanced.

“The suburbs around Paris are not all made the same,” says Lindsay Krasnoff, author of The Making of Les Bleus (2012). “Some are poverty-stricken, like they are depicted in the media, but lots aren’t. Typically, although not always, the ones in the north tend to fit this stereotype. The ones in the south, southwest, much less so, and especially since recent waves of gentrification have pushed people out a little bit.”

Even Mbappé, the poster boy for the winning French team and its subsequent slums-to-celebrity narrative, has a background that doesn’t quite fit the stereotype. “Mbappé was far from destitute,” explains Krasnoff. “His father and uncle were football players, his mother an elite-level handball player. He comes from a very different background to second-generation families in Bondy; not rich, but certainly not as poor as he has sometimes been portrayed.”

When France won their first World Cup on home soil in 1998, the team included Patrick Vieira, Thierry Henry and Lilian Thuram, all of whom hailed from a similar part of the country. The role that they played, along with players of Arabic heritage (Zinedine Zidane, for example), led to the coining of the phrase ‘black, blanc, beur’ (loosely translated as ‘black, white, Arab’), which played on the French flag’s tricolour: the ‘bleu, blanc, rouge’.

The message to the wider world was that France was proud of its diversity. However, the rioting in the banlieues across the country in 2005, as well as the way that the public turned its on black and Muslim players such as Nicolas Anelka and Franck Ribéry when the national team performed badly at major tournaments, suggested that the reality was not the same. “It was held up as an ideal and a French future,” says Krasnoff. “Everyone acknowledges that idea of a perfect multicultural demographic failed.”

It’s difficult to assess, however, how much of the harsh treatment was down to the players’ race, religion or background, as opposed to their character. “In 2011, the French were falling out of love with the national team,” says Paris-based journalist Jonathan Johnson. “It didn’t get better until 2014, when they qualified for the World Cup (just). Since then there’s been a rebirth and a new-found respect. Now the make-up of the French squad is testament to the success of the country’s diversity – that’s a massive source of pride for politicians and the general public, even if you’re not a big football fan.”

Key to this new sense of pride is the fact that players, regardless of their heritage, are keen to identify as French. It’s the post-revolution concept of la patrie being played out nearly 250 years after its declaration – an almost Soviet-like agreement to contribute to the country, or ‘fatherland’.

After the World Cup win, when a tweet was posted listing the squad members, each one with the accompanying flag of their heritage, left-back Benjamin Mendy retweeted it, changing each one to a French flag and and captioned it as “fixed”.

In reality, the notion that talent from Senegal, Algeria and the Ivory Coast had been brought together in a perfect tale of multiculturalism to form France’s winning team was one that gained far greater traction outside of France than in it. The country’s 2018 slogan was not about the colour of people’s skin, but their shirt: ‘Proud to be blue’.

“In the US, it was a story that was exacerbated, in France it was a non-issue,” says Krasnoff. “They were proud of their roots and heritage, but proud to be French. Part of the problem with that discourse was trying to apply the American model of identity to the French one. Whether you agree or not with how the French view identity, it is a very different thing altogether.”

French football identity has long been associated with immigration and the working class. Two of the French stars that finished third at the 1958 World Cup, Just Fontaine and Raymond Kopa, were immigrants. Kopa’s parents were both Polish, while Fontaine, who was also top scorer at the tournament, was born in Morocco. France’s success in the 2018 World Cup may have been down to the diversity the banlieues boy brought to the team but, more likely, it was thanks to substantial investment from the government after the country’s 1960s ‘sporting crisis’.

Krasnoff says: “France’s poor performance at the 1960 Olympics was seen as an abject failure and Charles de Gaulle [the president at the time] was enraged. It was an international humiliation and tapped in to a perception that France couldn’t win – in sport, in the military, in whatever.”

As a result, policies were put into place and sport was invested in heavily. Those policies are why state-of-the-art football academies such as Clairefontaine (which is located in Paris’s suburbs) were built, why French football teams were successful at international tournaments and why the 21st century saw a sudden spike in the number of French basketball players entering the NBA.

“France isn’t a football country. It’s proud to show off its diversity, in sport or otherwise,” says Johnson “That’s reflected in hobbies that children are encouraged to do – football, rugby, tennis, handball etc – regardless of their heritage. Understandably, football is the current flavour of the month.” 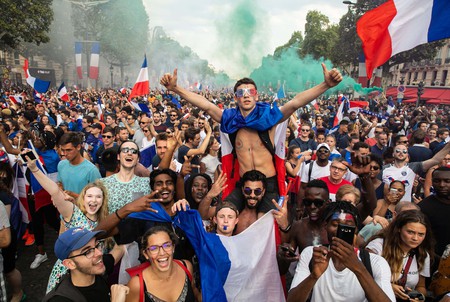 But given the way in which a ‘united’ France unravelled in the early part of the 21st century, can the French be confident that this recent positivity and success is here to stay? Will the banlieues be looked upon as places of civil unrest, or as the celebrated training ground of for future sporting heroes?

“It’s very different from the 1990s in terms how sport is viewed in French society – winning teams have helped change attitudes,” says Krasnoff. “It also depends on what part of the French population you talk to. Sport in France is one of the most demographic terrains, regardless of ethnicity.”

Johnson says: “French people will invariably look at the make-up of French squad and note the role that banlieues played, but the negative connotations within that are difficult to drop for some.” And Krasnoff also notes that the rioting is still “seared in people’s minds”. However, France’s continued investment in sport will surely help ride this recent wave of optimism far longer.

The Olympics and the Rugby World Cup are heading to France in the near future, and golf’s 2018 Ryder Cup was held in the Parisian suburb of Guyancourt. While the French have taken to the streets for genuinely distressing reasons in the recent past, there is plenty of opportunity to do the same for far happier occasions to come. Regardless of wealth, religion, race or even the sport involved, the country’s banlieues will continue to play an important role, but it is the whole country – la patrie – that matters more.