Inaugurated in April with the help of history’s most reluctant Nobel laureate, Bob Dylan, La Seine Musicale is a spectacular new addition to Paris’ cultural scene. The completion of this €170-million project represents a huge step forward in megawatt architect Jean Nouvel’s 10-year program to redevelop the long-derelict Île Seguin to the west of the French capital.

Why the Île Seguin?

The decision to site a major music venue on a narrow sliver of industrial wasteland 12 kilometers (7.4 miles) downstream from central Paris – if you take Notre-Dame as your starting point, as, incidentally, all French maps do – might seem like a strange one, until you learn a little about the island’s history.

One of the remaining 117 islands along the Seine’s 777 kilometers (483 miles), at the beginning of the 19th century the Île Seguin became the home of the city’s tanning industry, unmistakable thanks to the clunk, slap, and slosh of the factories and the pungent smell emanating from them. Despite the malodorous industry, the island became an urban playground during the Belle Époque. City dwellers would spend their days boating, fishing, and clay pigeon shooting along its shores, and their nights drinking and dancing in the riverside guinguettes. 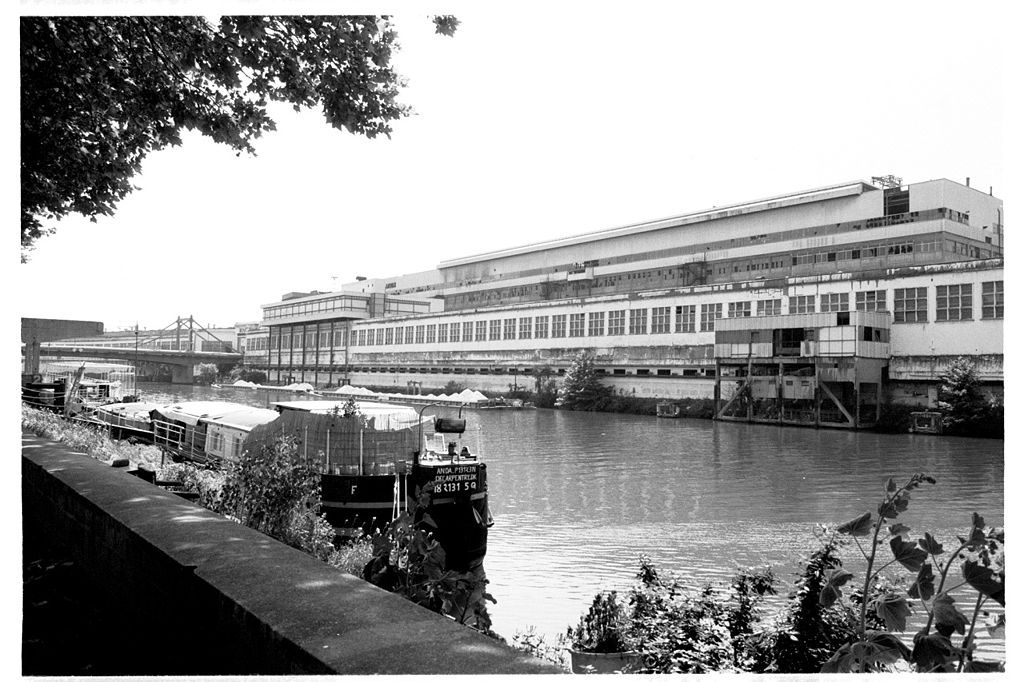 The 20th century returned the island to its industrial ways. When it opened in 1929, the Renault automobile plant was the largest in France, employing a workforce of some 30,000. The Île Seguin became synonymous with the country’s industrial prowess and trade unionism during the 1950s and ’60s. As the century wore on, fortunes tipped in the favor of France’s competitors and the factory shut its doors in 1992. The island, silent and purposeless for the first time in 200 years, lay abandoned, a concrete husk held up by asbestos and 10,000 tons of scrap iron.

Thankfully, this unwelcome interlude in the island’s history was never without hope of a second, triumphant act. Nouvel campaigned for the safeguarding of its industrial heritage and its renewal for future generations, finally winning the commission for its redevelopment after a decade-long study.

How does La Seine Musicale fit into this vision?

The construction of La Seine Musicale simultaneously represents a return to the halcyon days of the Belle Époque and an embrace of Paris’ future, thanks to the building’s innovative and ecologically minded design. The pair responsible for this were the Japanese architect Shigeru Ban, the 2014 winner of the Pritzker Architecture Prize, and his French colleague Jean de Gastines. 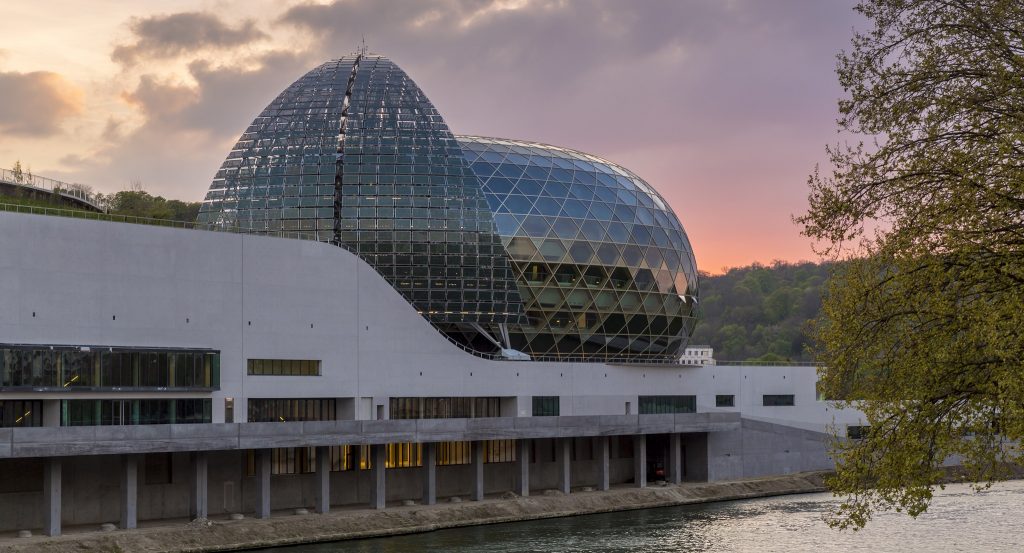 The monument, which takes up the northernmost third of the island, rises like the prow of a ship from the river, pointing seaward to its mouth at Le Havre. A globe-shaped observation deck, made of glass and timber laminated lattice, sits atop the concrete hull and around it slides a ‘solar sail,’ composed of 470 photovoltaic panels, which tracks the sun across the sky and maximizes the generation of clean energy.

Inside, the heaviness of the concrete and technological bravura gives way to a more organic style, characterized by open spaces and intricate woodwork. 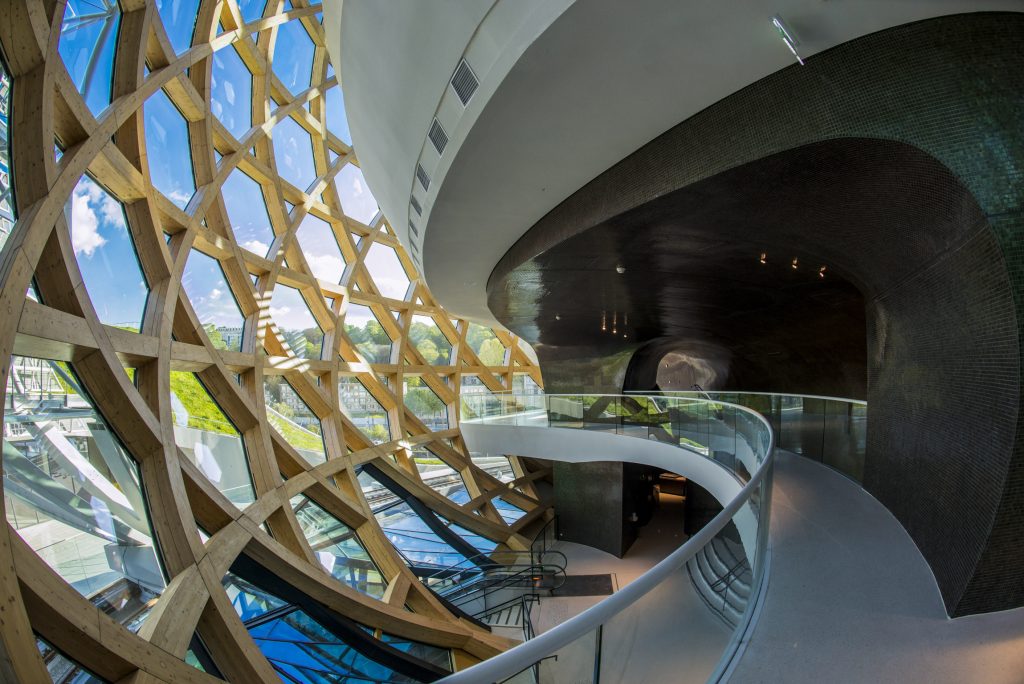 The main draw of La Seine Musicale is its two concert halls. The largest of these, the Grande Seine, can seat 6000 guests and will host musicians, musicals, and ballets. The Auditorium is more intimately proportioned, with a capacity of 1150. The wooden interiors, which combine oak, birch, and cedar, were designed to guarantee exceptional acoustics and the space will be the home of the Insula Orchestra, led by Laurence Equilbey. 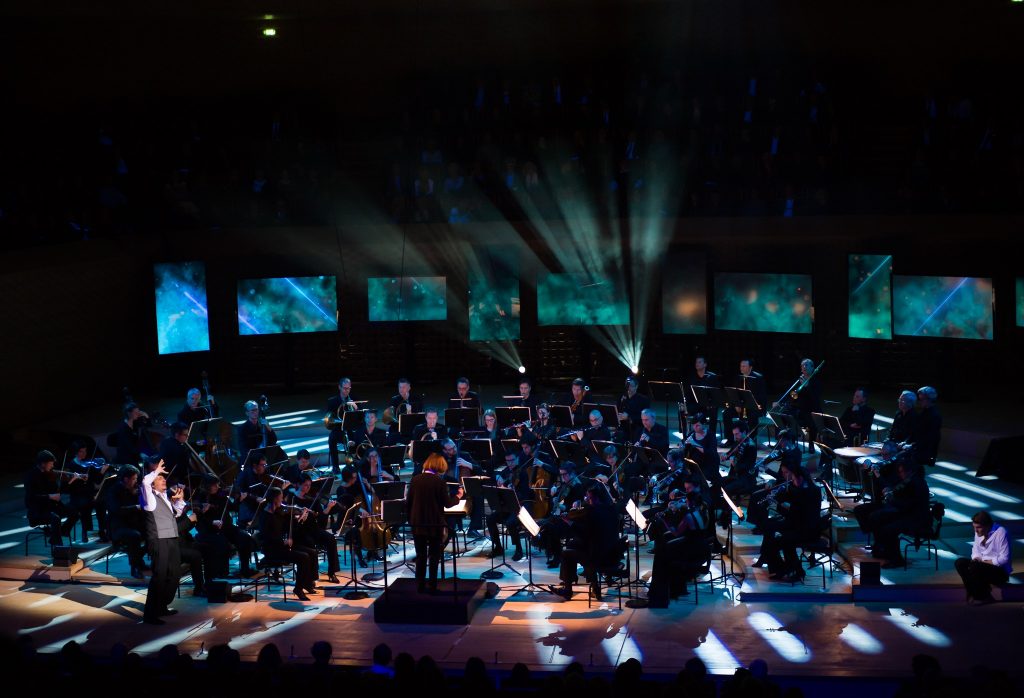 Amazingly, the venue’s performances aren’t only for ticket holders. ‘I wanted to open the building to the general public,’ Ban told a press conference at the inauguration. ‘I also installed a big screen at the entrance so that, even without a ticket, people can come and enjoy the music.’ The screen is so large that it can be seen from two miles (3.2 kilometers) away.

Visitors can also enjoy the Jardin Bellini on the rooftop, which stretches to 7410 square meters (1.83 acres), as well as five recording studios and rehearsal spaces, which can be rented by the half-day, an indoor shopping street, a jazz club, and exhibition areas.

Jean-Luc Choplin, who relaunched the Théâtre du Châtelet, has been named as La Seine Musicale’s artistic director. His preference for eclectic programming is evident from the get-go, with performances by Herbie Hancock and the Alvin Ailey American Dance Theater on offer this summer, and a run of West Side Story scheduled for October.

There’s more greenery to explore nearby, with the Jardin de l’Île Seguin and the Domaine National de Saint-Cloud, and a world-famous ceramics museum in Sèvres five minutes away.

La Seine Musicale is open from Tuesday to Saturday, 11AM to 7PM. Opening times may vary in the event of certain concerts and events.