The 9 Best Restaurants For Al Fresco Dining In Paris 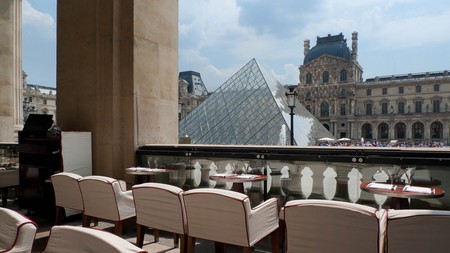 Be it a rooftop wonder or a waterside gem, there is somewhere for all tastes and budgets to enjoy eating al fresco in Paris. We have selected 10 of the coolest restaurants and bars to soak up the sunshine and the culture of the French capital. 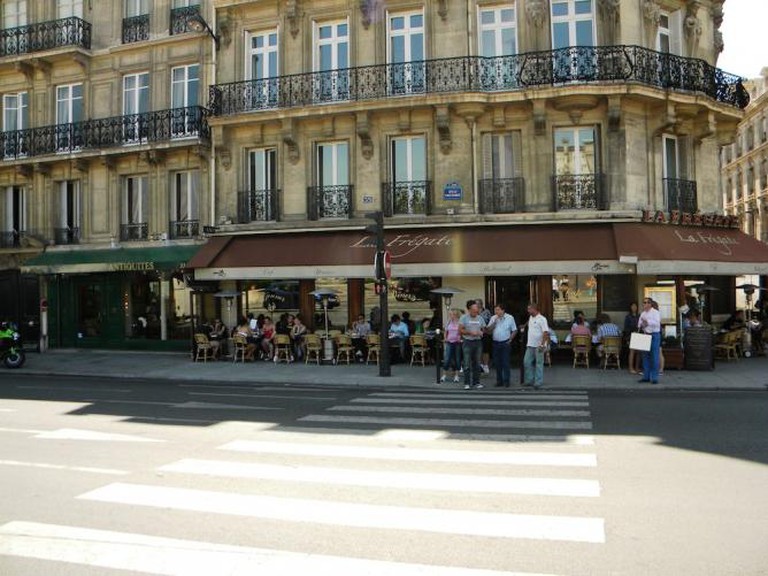 Quai Voltaire, La Fregate, Paris | © Britchi Mirela | Wikicommons
The pavement terrace of La Frégate is a great spot to soak up some of historical Paris. The Pont Royal is across the street leading to the Louvre and the Tuilerie gardens, and the Musée d’Orsay is just a stone’s throw away on the same quayside. If the flow of traffic were replaced by horses and carriages, you could easily be in a different epoch; this feeling of a different age is what Alexandre Dumas must have felt when he wrote the legendary tale of the Three Musketeers. And, indeed, this is where it all began: the real d’Artagnan who served Louis XIV as captain of the musketeers of the guard, and on whom Dumas based his novel, lived in this very building in the 1630s. Food-wise, La Frégate is a haven for oyster lovers with its fine selection of Normandy-sourced oysters to be savored with a carefully selected bottle from the curated wine list. A traditional menu also proposes some great classics such as onion soup or homemade fruit tarts. 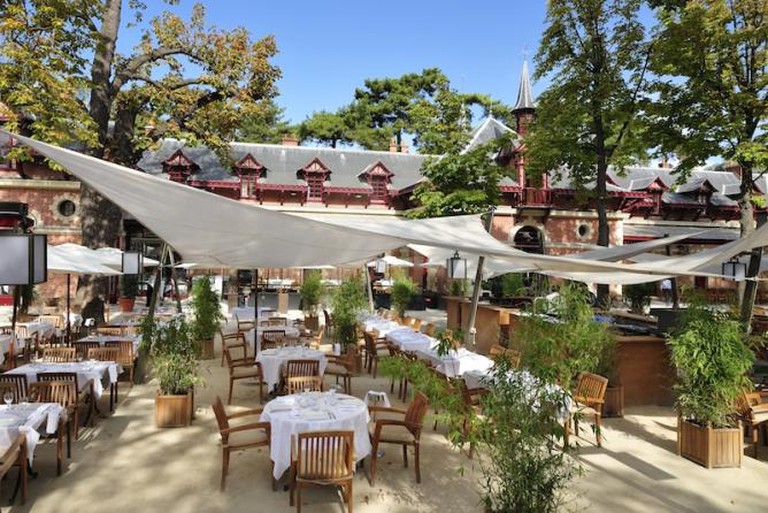 Courtesy of Les Jardins de la Bagatelle | Les jardins de Bagatelle, Paris
Located in the woodland of the famous Bois de Boulogne, the terraces of Les Jardins de Bagatelle are a perfect natural setting to enjoy some serious peace and quiet away from the hustle and bustle of the city. The restaurant building is in the converted 19th-century stables belonging to the Château de Bagatelle. This is an edifice that resulted from a mere bet between Marie-Antoinette and her brother-in-law who was later to become Charles X. Legend has it that Marie-Antoinette challenged him to build the mansion in just two months, which he succeeded in doing. The open-air terrace leads from a huge veranda, which can serve as an alternative to al fresco dining in case of rain or a drop in temperatures. As for its culinary showcase, the restaurant proposes a traditional French menu at a reasonable price. An excellent place to dine en famille, the chef has also devised a menu to suit children’s tastes. 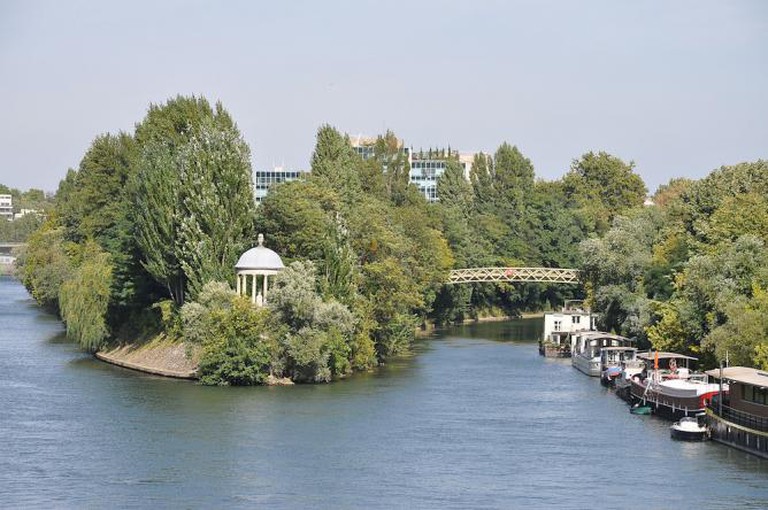 Temple de l'Amour a Neuilly | © Moonik | Wikicommons
Situated on the Ile de la Jatte, a residential island on the river Seine in the elegant western suburbs of Paris, the Café de la Jatte is an impressive 19th-century building. It was formerly used by the Paris Opera House as a warehouse for storing props before its transformation into a trendy restaurant in the 1980s. On a warm sunny day, its treed terrace is a perfect getaway from the city without having to travel far (the Ile de la Jatte is accessible by Metro). The Café de la Jatte’s cuisine is pure Italian made with authentic Italian ingredients. From small pizzas garnished with black truffles to asparagus risotto or scampi with aubergine purée, every aspect of the menu is bursting with exciting flavors. The cafe also lends its premises to Spuntino, a lovely delicatessen which sells Italian produce and serves casual meals on a separate adjoining terrace. 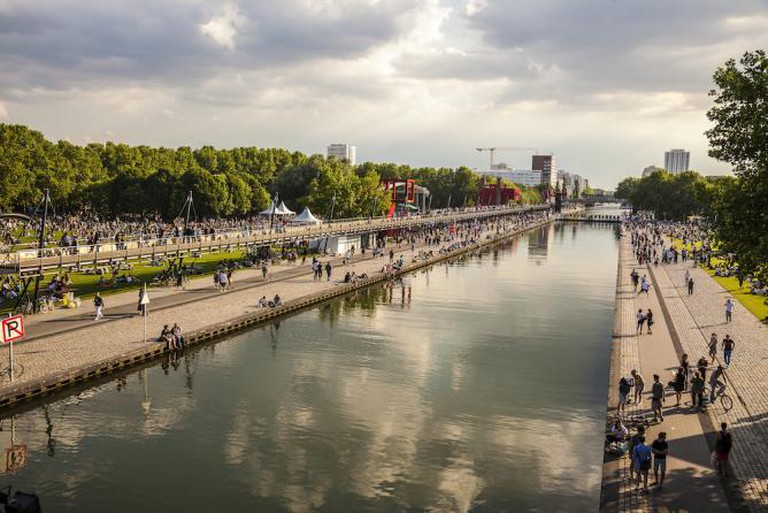 Canal de l'Ourcq | © Philippe Lévy
Situated in the Parc de La Villette, one of Paris’ biggest urban projects in the north of the city where nature rhymes with culture, discovery and architecture, My Boat is a stunning edifice resembling a 1930s cruise ship. It has three waterside terraces along the Canal de l’Ourcq running through the park, and offers a peaceful place to dine away from the city traffic. Chef Michael Loiseau sources his produce daily from Rungis, the biggest wholesale market in Paris, turning fresh ingredients into gastronomic delicacies. He calls the evening menu ‘Rousseau’ as a tribute to the chef who went down with the Titanic. The interior design of My Boat is very reminiscent of the sumptuous passenger liner and in terms of volume it covers a space of some 600 square meters.

Bistro, Market, Restaurant, French, $$$
Facebook
Email
Twitter
Pinterest
Copy link
Share
Le Bistro des Dames is a secret that needs to be told. Tucked away on the rue des Dames a few streets from the animated Place de Clichy, this restaurant-cum-hotel (the latter goes under the name of Eldorado) is harboring one of the city’s most enchanting patios. It is open to the hotel’s residents and non-residents. Fairy lights hang among thick green foliage offering a warm, romantic atmosphere. A variety of chairs and tables likely plucked from a flea market make this hideaway all the more endearing. Despite its retreated position from mainstream Paris, Le Bistro des Dames is becoming a trendy place for fashionable Parisians to gather and it is not impossible to come across the odd celebrity. The menu is based on Mediterranean dishes and changes regularly according to season. When the sun comes out, the secret is out, so expect to have a few drinks before dining out at Le Bistro des Dames.

Restaurant, French
Facebook
Email
Twitter
Pinterest
Copy link
Share
Les Ombres is part of the Quai Branly Museum situated on the Left Bank of the Seine between the Pont d’Alma and the Pont d’Iena. Founded in 2006 by former President Jacques Chirac, it is home to exhibitions, research and education of the art and culture of non-Western civilizations covering Africa, Oceania, Asia and the Americas. Its avant-garde architecture is the work of the renowned architect Jean Nouvel, who included a rooftop restaurant in the design. The restaurant took its name from the shadows – les ombres – created by sunlight pouring onto the terrace and moving around the different parts of the dining area. The open-air terrace offers a magnificent panoramic view across Paris to the Eiffel Tower and beyond. There is no shadow of a doubt on the quality of the food served here with creative cuisine signed by renowned chef Frédéric Claudel and desserts created by chef pâtissier Pascal Chanceau.

Theater
Facebook
Email
Twitter
Pinterest
Copy link
Share
Located in the southern 14th district of Paris, L’Entrepôt is off the beaten track but worth making the detour for its offbeat cultural events and secluded open-air dining experience. It was originally set up in the 1980s as a small art house cinema run by Frédéric Mitterand, the late former President’s nephew. Today, however, Parisians come here to enjoy contemporary art exhibitions ranging from photography to sculpture, to watch a genre film or to listen to live music. L’Entrepôt is also a trendy place to eat with a vast restaurant offering a well-lit veranda leading on to a beautiful patio garden. On a hot sunny day, the trees will provide natural shade and a menu offering fresh summer ingredients provides food for thought after an avant-garde film. 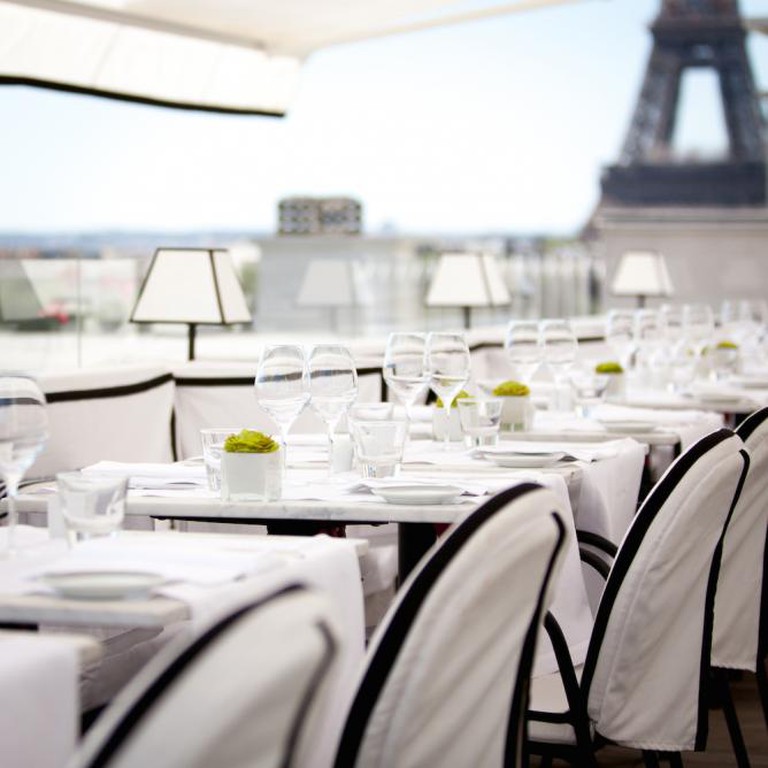 © Patrice Lariven / Courtesy of Maison Blanche
Just off the Concorde end of the Champs Elysées, the Avenue Montaigne is home to the Théâtre des Champs Elysées, one of the city’s well-known theaters for opera and classical music. In turn, the theater is home to the Maison Blanche, a luxurious rooftop restaurant with elegantly dressed terraces providing breathtaking views of the splendors of Paris. The views stretch across the Esplanade des Invalides capturing its gilded dome and sweep along the river Seine where bateaux mouches are slowly cruising past the city’s historical treasures. To savor these magical moments, Chef Hervé Nepple proposes a menu based on natural ingredients, which he transforms into creative dishes inspired by the pioneering cuisine of the world famous Pourcel brothers. Haute cuisine and panoramic views come with a price, but the privilege of dining al fresco at the Maison Blanche is priceless. 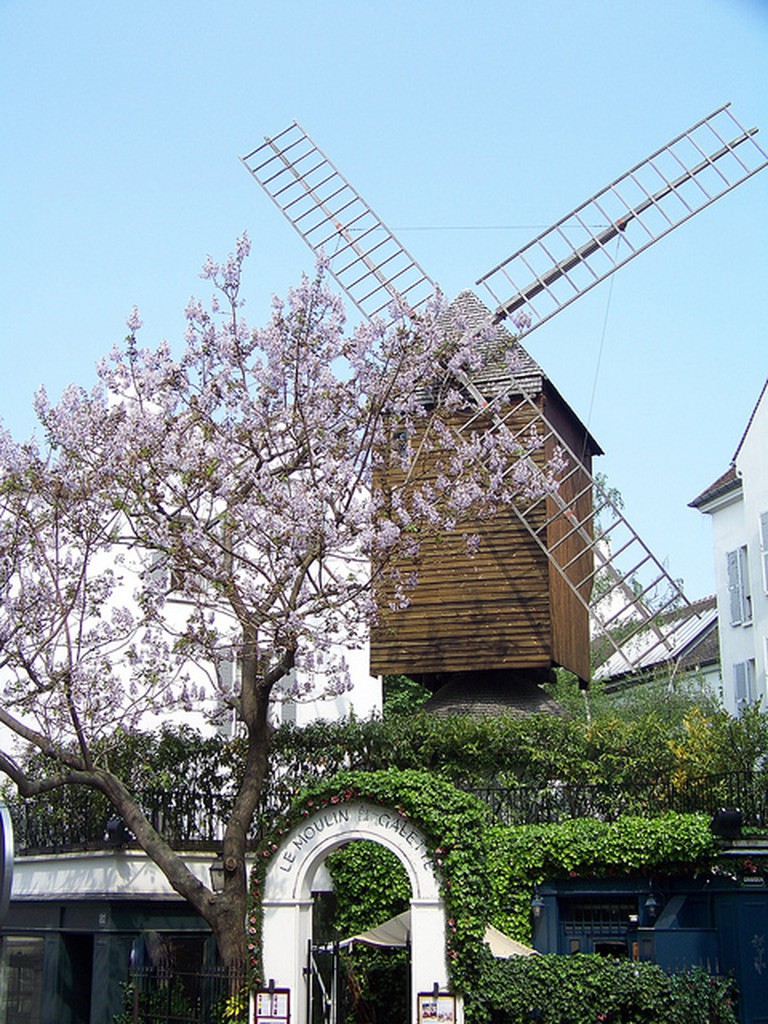 Moulin Radet | © Rodney/Flickr
Perched at the top of the rue Lepic, a market street leading from Le Moulin Rouge and winding up to the heights of Montmartre and Sacré Coeur, Le Moulin de La Galette has been a place to enjoy outdoor entertainment since the second half of the 19th century. Its history has been documented by some of France’s best known artists, notably Renoir, and in the 18th century, the millers here would make money by selling ‘galettes’ – rye bread rolls – and milk to the villagers. Today, the offer of nourishment extends to a five-course tasting menu comprising two starters, fish and meat courses and a dessert all beautifully prepared using seasonal ingredients by a former Michelin star chef. With its lampposts, trees and trellises, the Moulin’s secluded cobbled terrace is oozing with the undying romantic ambiance of Montmartre, a real picture of enjoyment.
Give us feedback