When Agnès Varda Went To Cuba 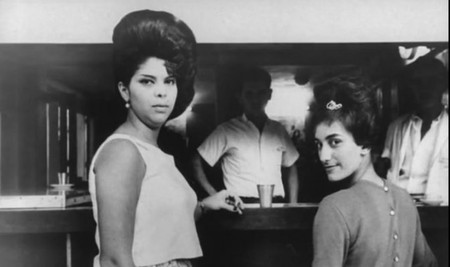 The French new wave director Agnès Varda continues to be acclaimed as a great feminist filmmaker, 60 years after the release of her debut, La Pointe Courte. How did she end up being invited to take photographs of post-revolutionary Cuba?

Born in Belgium in 1928, Varda trained in Paris as a photographer, and it wasn’t until 1954 that she released her first film. Throughout the next decade she continued to help shape French New Wave cinema by producing and releasing groundbreaking, philosophical films that remain popular.

This first decade of her filmmaking career culminated in the release of Salut les Cubains, (Hi, Cubans), a documentary film that is featured in the Centre Pompidou’s exhibition Varda/Cuba, which ran until February 1, 2016.

Varda, a left-wing feminist, was fascinated by Cuba. The Cuban Cinema Institute invited her there just a few years after Castro took power, and it’s clear that she was enchanted by the aesthetics and the feel of this socialist paradise, as much as she was by its politics. Combining her separate “lives” (as she refers to her career changes between photography, film and fine art), her ambition was to make a film composed of animated stills. It became, according to the Pompidou, “a key documentary of the sixties.”

Varda’s talent is evident in every frame: how do you show laughter that shakes your whole body in a still image? How do you show warmth and vibrancy of people and place in black and white? No problem for Varda. Her history of working with non-professional actors gives her a natural leg-up in this case, and there is not a single shot that does not seem completely authentic.

The photographs are shown in the documentary in series, animated, and backed by the rhythms of the cha-cha-cha – the effect is that of a very large-scale flip book. The voiceovers from Michel Piccoli and Varda challenge the audience’s assumptions, even in 2016, about both Cuba and filmmaking. But they are just as full of life on their own, on the wall, with only the viewer’s imagination to offer a soundtrack and make one image run into another.

Varda lends the feminine voice typical of her work to Cuba. We see perfectly coiffed Cuban women dancing a sensuous cha cha in army fatigues, alongside ladies in fashionable ’60s outfits. She deals with socialism in a deft, humorous way – she gets past the censors, but what remains is not propaganda.

She deals with the stereotypes of cigars and beards by introducing barbe à papa (candyfloss; literally “daddy’s beard”) as being more Cuban than a revolutionary’s Castro-copy-cat beard. The same light touch in dealing with the heaviness of life that we find in Cléo de 5 à 7, in which Varda’s protagonist is awaiting results of a biopsy, is evident in her view of Cuba and les cubains. The photographer’s eye for a perfectly framed shot brings art to the humour and warmth of the work, and the famous Nouvelle Vague style applied to the Caribbean island has surely shaped the way Europeans view Cuba to this day.