A Very French Guide to Macarons at Pierre Hermé

No trip to Paris is complete without sampling the city’s macarons, which have a history stretching back to the 16th century and yet are the trendiest cakes around. Our guide explains just what makes these sugary bursts of color so delicious, where you can find the most outlandish flavors in town, and which drinks are best at washing them down.

Macarons are to the French what scones are to the British and what cupcakes are to Americans: hits of sugary goodness (though interesting strides are being made on the savory front) that instantly restore your joie de vivrometer to optimal levels. From a culinary standpoint, these multicolored mouthfuls consist of a buttercream, ganache, or jam filling sandwiched between two mini-meringues made with ground almonds, egg whites, and icing sugar. When done well, the crisp exterior and soft insides melt in your mouth, releasing one of the myriad flavors dreamed up by Paris’ pastry pioneers. 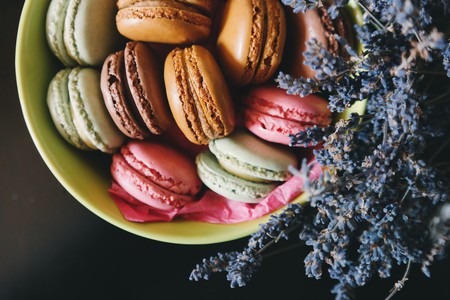 What makes a good macaron?

A quality macaron can be judged based on three broad categories: structure, proportions, and ingredients. With respect to the first, what you don’t want to see are either hollow meringues that let out a sad puff of air when you bite into them or, worse still, shells that separate from their squidgy interiors. You’re looking for macarons that can hold themselves together and deliver smooth bites from crust to center.

The trouble with proportions often starts with the almond flour: if it’s not ground finely enough, the shells will end up unpleasantly bumpy. So, the smoother the surface, the finer the taste. You also don’t want to waste your time on macarons that are either too large or too small. Two bites should finish one off (or, if you’re greedy, one bite that requires some strenuous jaw rearrangement). The three layers should also be equally proportioned.

In general, be wary of excessively bright macarons, which usually indicates both an overuse of coloring and sugar. If the macarons look like they could glow in the dark, avoid them (unless they’re in the window of a master pastry chef like Pierre Hermé). Go for meringues with natural shades, perhaps enhanced by a sprinkling of something more luminous. 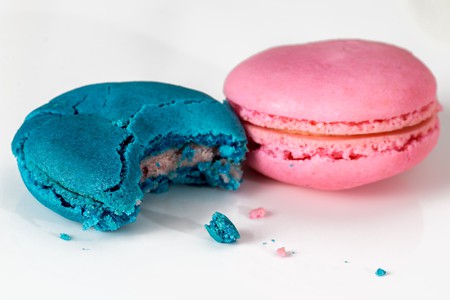 The best macarons are always made from real almonds rather than almond extract, a cheaper alternative normally reflected in the price. These aren’t the most budget-friendly treats in the world, remember, but it’s worth indulging in something of quality. Relatedly, you want to ensure that your pistachio macarons (one of the most popular flavors) have been made with real pistachio nuts, not with almonds and then dyed green.

Another rule to add is eating them while they are fresh: nothing is more disappointing than a stale macaron – except perhaps for a boxful of stale macarons. 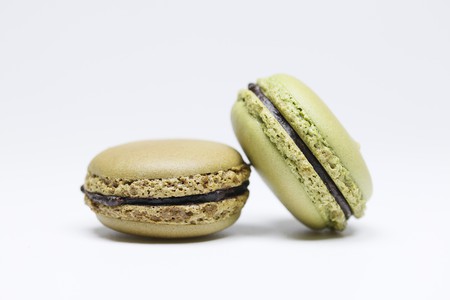 What flavors should you expect?

Perhaps more than with any other dessert, French or otherwise, you should expect the unexpected with macarons. There are classics – such vanilla, chocolate, rose, and pistachio – that you’ll find in any bakery, and others – like salted caramel, orange blossom, and raspberry – which have become a standard offering since the macaron craze began circa 2014.

The man behind said craze, Pierre Hermé, is famous for conjuring up new flavor combinations. Three which have become classics in their own right are his Mogador (chocolate and passion fruit), Mosaïc (pistachio, cinnamon, and kirsch-soaked cherry), and Ispahan (rose, litchi, and raspberry) varieties. 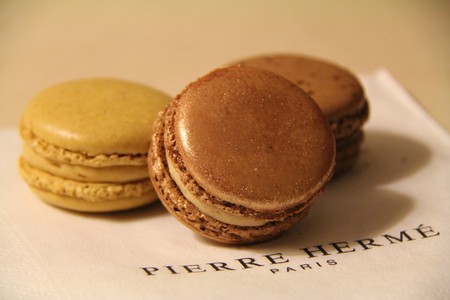 Other inventive macaron makers include Sadaharu Aoki, home to flavors from Japanese cuisine including yuzu, black sesame, wasabi, matcha, and umeboshi, Dalloyau, whose bergamot tea and champagne-cognac specialties have made their mark on the Parisian foodie scene, and, finally, Le Monde du Macaron, where the adventurous can sample Red Bull, lime and cactus, Roquefort, and vanilla and olive oil bite-sized bundles of joy.

What should you drink with macarons?

When choosing the perfect accompaniment for your macarons, you should always try to match the beverage to the particular flavors you’ve selected. That said, coffee, tea, and champagne are the three most popular pairings, depending on the time of day. 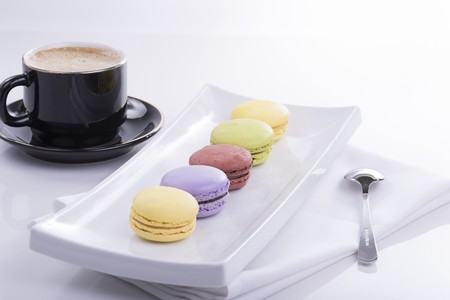 You can’t really go wrong with tea and macarons, especially classic flavors like chocolate and hazelnut. However, green tea works nicely with fruit (raspberry, passion fruit, and cherry) while white tea is better with flower-based verities (rose, violet, and jasmine).

With champagne, what you want to do is match the sweetness of the wine to the macaron. So, if you’ve picked savory flavors, wash them down with a glass of Brut (dry) champagne, and for sweet macarons, stick with a Demi-Sec (semi-dry) or Doux (sweet) wine. For fruity flavors, Demi-Sec is always the way to go.

Can you make macarons at home?

While some talented Parisians with a lot of time and space at their disposal might make their own macarons ahead of a dinner party, most buy theirs from a trusted patisserie. However, they aren’t impossible to pull off if you know what you’re doing. There are countless videos on YouTube explaining just how it’s done but, if you’re in Paris and would rather learn from a human being than a screen, you can take a cooking class from a local, including one on the Île Saint-Louis.

How do you store macarons?

Whether shop-bought or homemade, you only have three to five days to enjoy your macarons (though how anyone can go this long without polishing off the entire box is a mystery). You should keep them in an airtight container on a low shelf in your fridge and give them 30 minutes to warm up before serving. You can also freeze them for up to six months.