A Quick Guide To Paris In 72 Hours

The recipe for enjoying Paris is simple – eat, see, wander, and repeat. As a city of both immense literal and visual feasts it’s important to hit all the big spots while skimming over a few to save time. Paris in 72 hours is a tall order, but is totally manageable with a little planning and a big appetite for culture and food.

Once checked in and settled at your accommodation, skip out on the hotel breakfast and head straight for Eric Kayser in the Latin Quarter to indulge in what can only be described as the best use of butter on the planet – the croissant. This boulangerie is famous for creating some of the best bread (and gluten free goodies) in Paris, so if a croissant won’t cut it for breakfast, the baguette sandwiches or other sweet pastries like the brioche mousseline or kougloff are sure to do the trick. Get them to go and head north toward the Notre Dame. Once you arrive at the towering 13th-century Gothic cathedral, have your breakfast at either the Square René Viviani overlooking the south side of the church, or at Square Jean XXIII to view the famed flying buttresses. Dining at the former has the added advantage of being next to the famed Shakespeare and Company, where you can grab a coffee at the adjoining cafe and snap a pic of the storefront itself. Spend about an hour at the cathedral before heading across Pont Saint-Louis to the smaller sister island of Saint Louis. 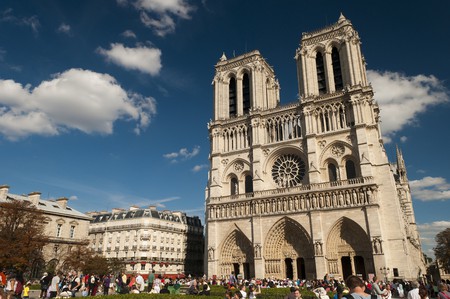 Appreciate the historic neighbourhood of Île Saint Louis by strolling down the main road of Rue Saint-Louis en L’Île. Lined with beautiful 17th-century style buildings, the area is a dreamy getaway from the bustle of the city. Wander down the main street and poke into little boutiques for unique souvenirs and shopping. Toward the west end of the island is the 17th-century church Saint Louis on the Island which is worth popping into, as it is also quite impressive. Once finished on the island, walk along the north side to enjoy more picturesque views of the river and cross over the Pont Saint Louis once again. Next on the docket are the Palace of Justice, Sainte-Chapelle, and the Conciergerie in the middle of the Île du Paris. Check out the exterior of the first, and enter the latter two for exquisite architecture and thorough doses of religious and revolutionary history. It should take a few hours. 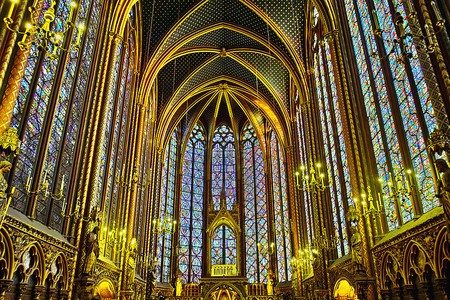 The late afternoon is a more relaxed venture starting with a quality meal at the cozy Ma Salle à Manger near Pont-Neuf. Sample classic French cuisine like escargots, French onion soup, boeuf bourguignon, or confit de canard and knock a few more off your culinary bucket list. After lunch, it’s time to rest and wander around the serene Pont-Neuf gardens before hopping on a one-hour riverboat cruise from Vedettes Pont-Neuf. It’s touristy, but it’s a fast and effective way to see major sights like the Louvre, Place de la Concorde, Museé d’Orsay, Hôtel de Ville, and the Eiffel Tower while also getting a quick history lesson on each. 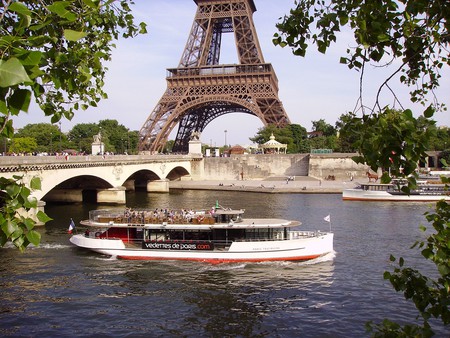 Cross the river at Pont-Neuf and walk east to the Louvre to enjoy the facades of the Palais du Louvre and the Pyramids. Skip the Louvre museum itself unless you’re a die-hard fanatic of one of the pieces within; it’s crowded and often can be an unpleasant overall experience due to this. If you’re up for it, walk through the Tuileries Gardens before heading back to your accommodation to freshen up or head straight to the 6th arrondissement for dinner and drinks. If you have a hankering for steak frites, head to Relais de l’Entrecote Saint Germain as it is their specialty. Otherwise, check out Les Deux Magots for the energetic atmosphere, good food, and terrace ideal for people watching. For the party-goers, head to Canal Saint Martin to take in the trendy night life at one of the area’s bars, taverns, or clubs. If you’re feeling slightly more low-key but still want to be out-and-about, check out the roof top patio at Le Perchoir Marais. There’s also no harm in skipping out in favor of a good night’s sleep. 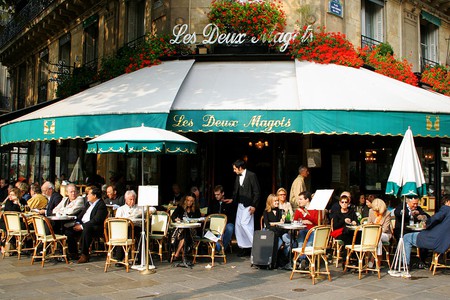 A beautiful fact about Paris is that most corner boulangeries are pretty great. A quick Google of your surroundings will provide insight as to the best one close to your accommodation. However if you’re feeling fancy, a quiche and drinking chocolate at the famed Angelina’s or expertly crafted pastry at Pierre Hermé are a sure fire way to up the blood sugar and energy of the morning. After breakfast, it’s time to hit the Musée D’Orsay to take in works by Manet, Monet, Cezanne, and Renoir. The former train station creates a unique environment to view the works, adding to the overall experience. 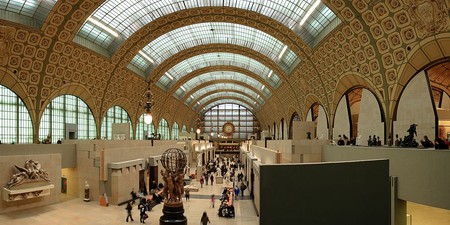 After viewing the famed Parisian works, it’s time to visit the neighborhood of Montmartre where many artists such as Renoir and Pizarro lived. You can choose to discover the area independently and wander the rolling nooks and crannies of the neighborhood or join a walking tour. Discover Walks offers free tours three times a day during peak season. Either way, starting at Blanche metro station walks you past the iconic Moulin Rouge; just be sure to end up at Sacré Coeur and climb the dome for one of the most spectacular views of Paris. For lunch check out Soul Kitchen for charming cheap fare or dine in fictional character Amelie’s workplace of Café des Deux Moulins. 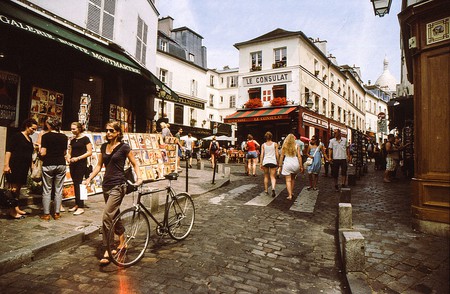 Take in the iconic Champs-Élysées at sunset and walk down the grand avenue to the giant Arc de Triomphe. The city will start to light up during your walk as dusk approaches. By night the busy avenue is just as spectacular and romantic, with lovers walking arm in arm. When finished marvelling at the well-lit monument, catch metro line one to the covered passage of Galérie Vivienne. Housed under the restored the 19th-century panels is the celebrated wine cave of Legrand Filles et Fils. The house offers a dazzling menu of carefully selected French fare on the lower level Comptoir de Dégustation. Do indulge in every aspect of their delicacies, from the wine and cheese to the seared duck foie gras. If you are looking for another night out check out the small area of Oberkampf where you can find craft cocktails and some of the city’s liveliest nightclubs. 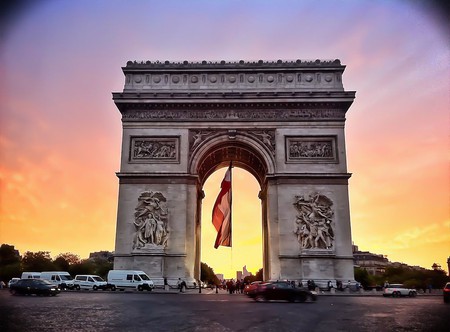 Everything is a bit slower on Sunday morning, so take your time getting ready and enjoying breakfast at Breizh. Located in the 3rd, Breizh is worth the line for their authentic buckwheat crêpes and modern presentation. Plus, the Pompidou is a 10 minute walk away, so spend the morning taking in modern art for a change. After the Pompidou catch the RER B to Denfert-Rochereau to check out the Catacombs and grab lunch at the Rue Daguerre market. 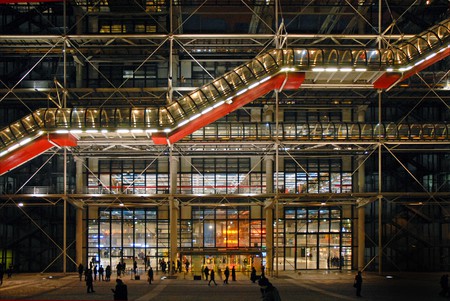 On the weekend, the shops of Rue Daguerre spill out into the pedestrian street and transform it into an open air market. Sample meats and cheeses to create your own sandwich or take to one of the many restaurants along the street before heading to the Catacombs around the corner. Make sure to put your sweater on before you head into the spiraling mass tomb as it can get chilly. Expect to be touring the Catacombs for around two hours. If the mass grave sight hasn’t satiated your macabre side, the Montparnasse Cemetery, where famous individuals such as Jean Paul Sartre and Simone de Beauvoir are buried, is a stone’s throw away. Along the north side of the cemetery is also a once-a-week art market known as Marché de la Creation. The artists themselves man the stalls so it’s a great way to pick up local art at an affordable price. 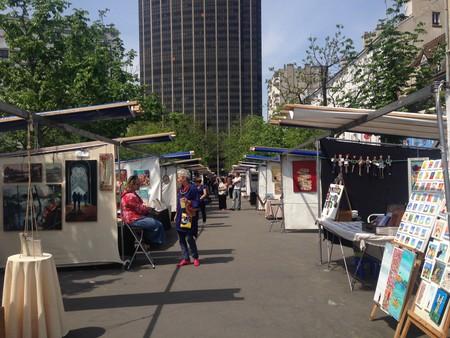 As dusk approaches, head to the Montparnasse Tower for a final look at the grand city of Paris. Head up to the observation deck 200 meters above ground to take in the 360-degree view and bid Paris farewell. If you have the energy, and don’t have an absurdly early flight, splurge on a final meal at Cobea or grab a quick, cheap, and authentic crêpe at Ti Jos less than a 10 minute walk away.