A Guide to 10 Lesser-Known Architectural Treasures in Paris 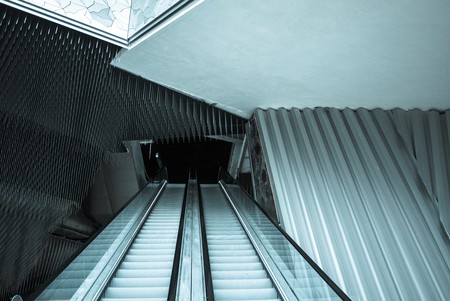 Perhaps you’ve already visited Paris, once, twice, or more times than you’d care to remember, and seen all the major landmarks: the Eiffel Tower, Notre-Dame, and the Sacré-Coeur. Or maybe these tourist attractions, and their year-round throngs, are your idea of a nightmare. Whichever scenario best applies to you, the ten buildings and monuments on this list offer less crowded, more intriguing alternatives for delving into the city’s architectural heritage.

A library might seem like a strange substitute for a tower but, in this case, it really is what’s inside that counts. Gustave Eiffel became world-famous thanks to his use of wrought iron and, in the case of his and Paris’s most recognizable structure, puddled iron, a close variant.

The Bibliothèque Sainte-Geneviève predates the Eiffel Tower by almost four decades (Henri Labrouste signed off on the project in 1850 after 12 years of work), and its cast iron frame, best seen in the main reading room, is just as impressive a feat of engineering and is, arguably, even more beautiful. 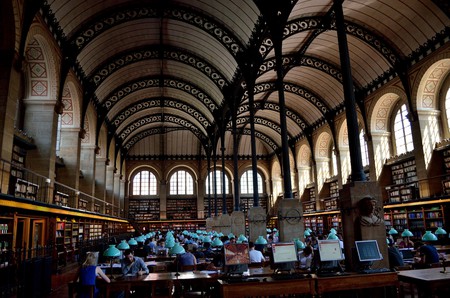 The legendary cathedral on the Île de la Cité tends to hog the limelight afforded to Paris’s Gothic architecture. Notre-Dame’s western façade and flying buttresses are magnets for tourists, but just a few minutes’ ride out of the city on the M13 is the Basilique de Saint-Denis, the birthplace of the Gothic style and the final resting place of all but three of France’s kings and a fair few of its notorious queens.

This grand medieval church was completed in 1144 – 19 years before Notre-Dame was even begun – and its suburban location keeps it a peaceful retreat for history lovers. 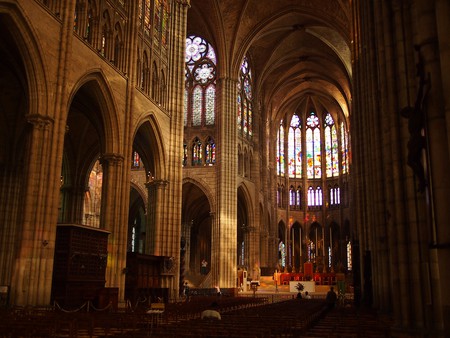 The Sacré-Coeur, perched at the summit of the Butte Montmartre, offers some of the most jaw-dropping views of the city. Designed by Paul Abadie and finished in 1914, the landmark’s white, weather-resistant travertine stone remains as distinctive as ever on the Parisian landscape. But it is not the only stunning Belle Époque church on the hill. The Église Saint-Jean-de-Montmartre, an exquisite example of Art Nouveau architecture from 1904, was designed by Anatole de Baudot. He created a truly remarkable building by combining a pioneering use of reinforced concrete with delicate tilework and stained glass by Jac Galland and Pascal Blanchard. 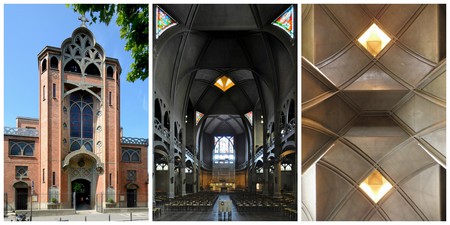 Few would struggle to identify the Arc de Triomphe, and most could pinpoint its location at the top of the Champs-Élysées, but not many people realize it’s actually the newest of Paris’s four triumphal arches. Built in memory of the victims of the French Revolutionary and Napoleonic Wars and completed in 1836, Jean Chalgrin’s work came 170 years after the Porte Saint-Denis, designed by François Blondel and finished in 1668. Both monuments were inspired by the Roman Arch of Titus and yet are noteworthy for their conspicuous lack of ornamental columns, which is said to give them a top-heavy appearance. 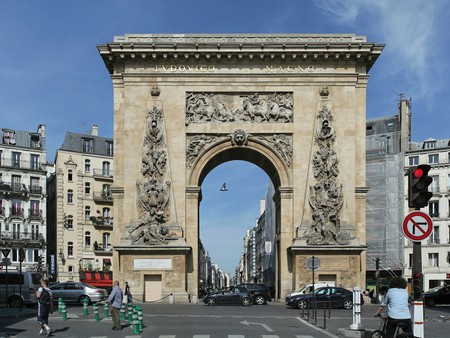 The New York Times wrote in 2007 that the Centre Pompidou, the inside out museum of modern art designed by Richard Rogers, Renzo Piano, and Gianfranco Franchini unveiled in 1977, ‘turned the architecture world upside down.’ The Institut du Monde Arabe, a sleeker but equally high-tech structure, followed a decade later. The traditional pattern of its signature glass wall hides 240 photosensitive shutters that automatically open and close to control light and heat entering the museum. The building made Jean Nouvel internationally famous and won the Aga Khan Award for Architecture in 1989, two years after it opened. 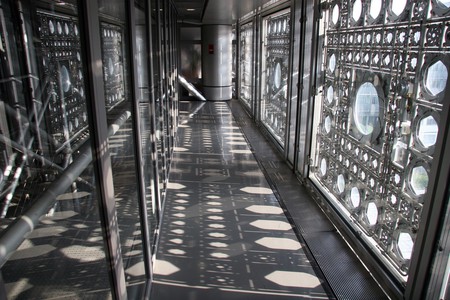 The Louvre is an architectural mishmash, from the 12th-century fortress in its basement to the glass pyramids of the late 20th century at its entrance. That being said, the style most people associate with the world’s most popular museum is French Renaissance, typified by the Lescot wing rebuilt between 1546 and 1553 under François I. He wanted it to match the Hôtel de Ville, commissioned in 1533. In 1871, rioters attempted to burn the building to the ground. Thankfully, the stone shell survived, and between 1873 and 1892, the interiors were restored in accordance with the tastes of the day.

Les Invalides → Church of the Val-de-Grâce

Les Invalides, a complex of museums and monuments dedicated to France’s military history, is known for housing the tomb of Napoleon Bonaparte and for its spectacular golden dome. Libéral Bruant was responsible for most of the buildings, but it was the younger architect Jules Hardouin-Mansart, one of the most influential figures in European architecture of the 17th century, who added the Église du Dôme, its most significant feature. Its two-story façade and dome are strikingly similar to those of the Church of the Val-de-Grâce, a royal abbey turned hospital, which was designed by François Mansart, none other than Jules’s great-uncle. 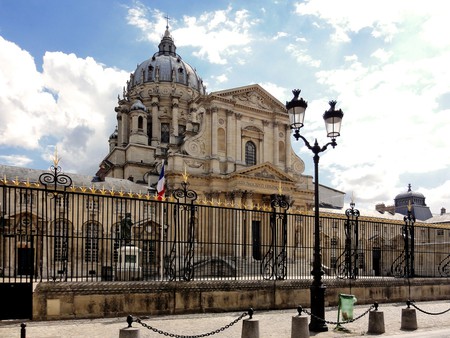 Frank Gehry’s vast ‘iceberg’ museum made quite a splash when it opened in October 2014 in the Bois de Boulogne. But there is another breathtaking building in a far less plush part of town that is deserving of attention: the Philharmonie de Paris, located on the outskirts of the Parc de la Villette. The 2,400-seat concert hall, designed by Jean Nouvel, was inaugurated on January 14th, 2015. The exterior is made up of 340,000 birds, fashioned in seven shapes and four shades of black and grey. Sunlight reflecting off their different surfaces creates the effect of a massive, swirling take-off. 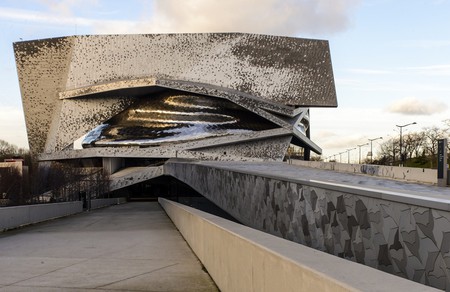 The Galeries Lafayette empire began in 1895 when cousins Théophile Bader and Alphonse Kahn opened one small store. Seventeen years later, work was completed on the astonishing glass and steel dome and Art Nouveau staircases that millions of people still come to see. However, to see a similar work of architectural beauty but without the harassed shoppers and overwhelming perfume stench, you can visit the headquarters of Société Générale further along Boulevard Haussmann. The grand central hall, recently renovated, contains a pinnacled stained glass dome suspended 23 meters above the ground and an enormous circular counter known as ‘the cheese’.

The Benedictine Abbey off the Boulevard Saint-Germain is one of the oldest surviving churches in Paris and, for the trendy set who live nearby, a popular place to get married. Founded in the 6th century, it was the burial site of the Merovingian kings and, much later, the philosopher René Descartes. However, up in Montmartre, in the shadow of the Sacré-Coeur, is another church that is rumored to be even older. The Église Saint-Pierre is said to have been founded by Saint Denis in the 3rd century. The Jesuit order was also created here by Saint Ignatius Loyola in 1540. 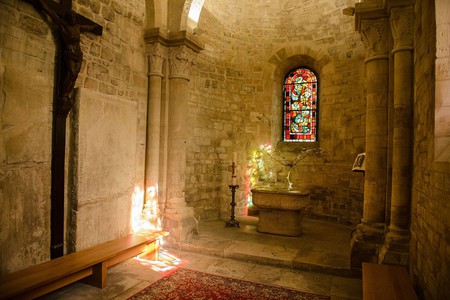 Click here for a map of all the above sites.