A Brief History Of The Trophée De France 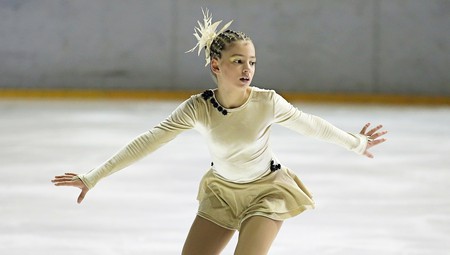 France has always held its fair share of major winter sports events, dating back to the first Winter Olympic Games in Chamonix in 1924. But in the 1980s – sensing it was missing a trick with the proliferation of invitational figure skating events like Skate America and Japan’s NHK Trophy – the French Skating Association created the Trophée de France. Its name has changed over the years according to sponsorship, but it is always a star-studded show where the competition heats up fast on the glistening ice.

Athletes compete, always in early November and usually in Paris, in four categories: men’s, ladies’, pair skating, and ice dancing. During the early Lalique years, the event’s undisputed star was Nice’s Surya Bonaly. She won gold five times between 1989 and 1994, with only one blip in 1991 when she placed outside the medals. Bonaly was also a nine-time French champion (1989-1997), the 1991 World Junior Champion, a five-time European champion (1991-1995), and three-time World silver medalist (1993-1995). She is also the only Olympic figure skater to land a backflip on one blade, a feat achieved at the 1998 Nagano Games.

For a brief time in the mid-1990s, when figure skating was enjoying its peak popularity, the name Trophée Lalique was transferred to a professional competition that was judged by a live audience rather than a panel of judges. During this two-year hiatus in sponsorship, the biggest winner was Canada’s Josée Chouinard who beat the reigning World Champion, Lu Chen of China, in 1995. Chouinard was nervous in her closing free skate performance, hitting the ice momentarily after an early triple flip and again later in the routine with a triple Lutz. Nevertheless, her strong scores in the short program and exquisite choreography were enough to seal the title.

Another major upset came two years later when France’s own Laetitia Hubert unseated the World Champion, the American Tara Lipinski, from the gold medal position after a stunning free program. As Lipinski watched anxiously backstage, Hubert, who was performing in her home stadium of Bercy, brought the crowd to its feet with a killer comeback performance from the opening triple Lutz/double toe loop to the final triple flip. Wearing a fierce gold lamé outfit, she was certainly dressed for success. Annecy’s Vanessa Gusmeroli also finished in third place in 1997, making it a bumper year for France’s women. Hubert remains the only French woman besides Bonaly to take this Grand Prix title.

In 2004, the Éric Bompard cashmere brand took over sponsorship from Lalique, though the event remained unchanged in terms of its prestige and standard of skating. Following the terrorist attacks in Paris on Friday, November 13th, 2015, the event, which was being held in Bordeaux, was canceled after only one day of competition, due to the state of emergency and national days of mourning declared across the country. The first round scores were later used to determine the medalists. Seventeen-year-old Shoma Uno from Japan took the men’s title, Gracie Gold from America the ladies’, Tatiana Volosozhar and Maxim Trankov from Russia won the pairs’, and Madison Hubbell and Zachary Donohue also from the US won the ice dancing.

The 2016 Trophée de France, for the time being without a principal sponsor, will be held at the AccorHotels Arena in Bercy from November 11th to 13th. Vanessa James and Morgan Ciprès will be hoping to make their mark on the pairs’ competition. The four-time French champions were awarded the silver medal last year after the event in Bordeaux. So far, 2016 has been a brilliant skating year for the pair. They have each recorded their personal best scores for the short program, free skate, and combined totals at the World and European Championships. Theirs could very well be the first French victory in this category since Sarah Abitbol and Stéphane Bernadis in 1998 and 1999!