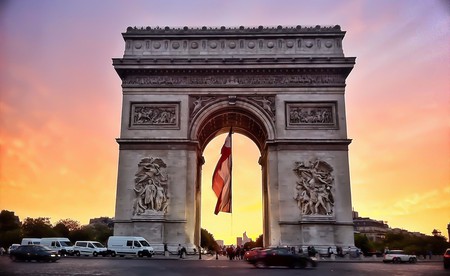 Standing at the western end of the Champs-Élysées, the Arc de Triomphe is the largest triumphal arch in the world, twice the size of the Arch of Constantine in Rome on which it’s modeled. Commissioned by Napoleon I and designed by Jean-François-Thérèse Chalgrin, the monument forms part of Paris’ Axe historique, which extends from the courtyard of the Louvre to the Grande Arche at La Défense.

After his victory at Austerlitz in 1805, the high point of the Grande Armée’s conquest of Europe, Napoleon told his soldiers: ‘You will return home through arches of triumph.’ True to his word, the Emperor tasked Chalgrin with finding the most suitable site for the monument in March 1806. The location of the Place de l’Étoile was agreed on May 9 and the first stone was laid to coincide with Napoleon’s 37th birthday on August 15 that year. 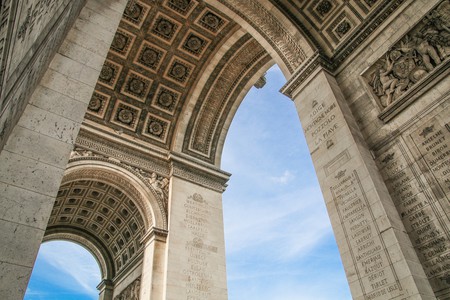 When Chalgrin died in January 1811, his former pupil Louis-Robert Goust took over as the lead architect. However, the whole project was put on hold after Napoleon’s abdication in April 1814.

It was during these final three years of construction that the sculptural features were executed. The four pillars are each adorned with a relief: Resistance of 1814 and Peace of 1815 by Antoine Etex, Napoleon’s Triumph of 1810 by Jean-Pierre Cortot, and, the pièce de résistance, The Departure of the Volunteers in 1792 (aka La Marseillaise) by François Rude. 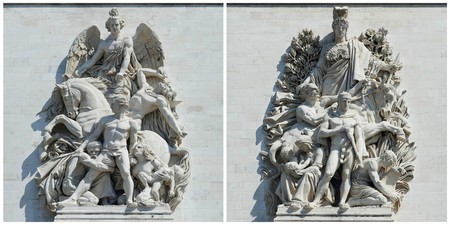 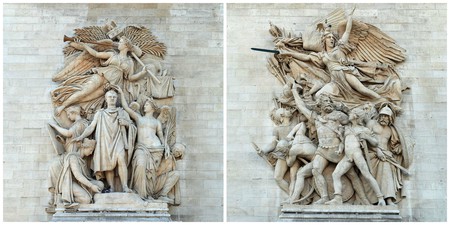 The names of 128 battles fought during the first French Republic and Napoleon’s Empire, as well as the names of 558 generals are inscribed on the white walls of the vaults. Those that are underlined indicate men who died on the battlefield.

The concept of the tomb of the unknown soldier first arose in 1916 while the Great War was still raging. A year and a day after it ended, it was given formal recognition and the Pantheon was chosen for its location. However, in 1920, thanks to a large-scale letter-writing campaign, the Arc de Triomphe was determined to be a more appropriate location. On January 28, 1921, the remains of the unnamed soldier were laid to rest at the base of the arch. 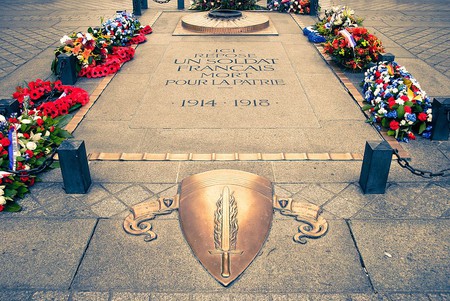 Two years later, the idea of a Memorial Flame was voiced and immediately gained support and approval. Edgar Brandt, a wrought-iron craftsman, was chosen to execute the design of architect Henri Favier. On November 11, 1923, the flame was lit for the first time.

The eternal flame is rekindled every night at 6:30PM and has never been extinguished.