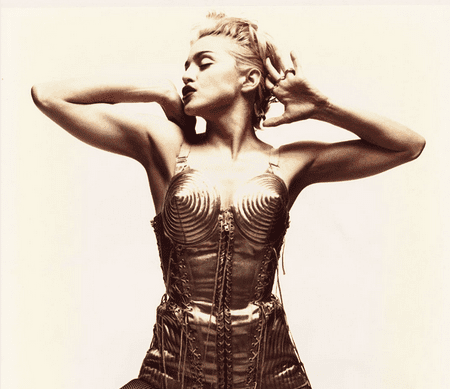 Pioneer of once-controversial gender-neutral styling, purveyor of exaggerated tailoring, nautical stripes and a certain illustrative design that plays on religious stereotypes, Jean Paul Gaultier’s signature handwriting has earned itself iconic status in the fashion industry over the past 40 years. The Parisian-born creative is best known for his prestigious namesake label, which now focuses solely on its haute couture line and continues to produce innovative, sometimes controversial collections season after season.

From the age of eight, the future designer showed an interest in fashion and design, so it was perhaps no surprise to those who knew him when, at 18, he sent out examples of his work to a range of ateliers by way of application. This venture ultimately earned Gaultier a position at Pierre Cardin where he learned the art of formal design.

1976 marked the launch of his first solo presentation, a cutting-edge selection of his now-signature features; statement sailor-inspired suiting, sharp silhouettes and an aesthetic that blurred the lines between masculine and feminine style. However, it wasn’t until six years later that he officially launched his own design house and a further three years after that when he opened his first store in Paris.

Not content with the stir that his 1984 menswear collection caused when he first sent male models down the runway in mid-length skirts and biker boots, Gaultier went on to make headlines in 1990 when he designed Madonna’s iconic conical bras, and again in 1993 when he launched his namesake fragrance.

Who's that girl @madonna? Photographed by #JeanBaptisteMondino.

1997 saw the launch of Gaultier’s haute couture line, which he continued to be a part of whilst acting as Creative Director at Hermès between the years of 2003 and 2010. He left Hermès with a view to concentrate solely on his own label but just a year later, Gaultier moved once again – this time to Diet Coke. Here, he lead the aesthetic across all creative platforms and designed a range of the brand’s eponymous glass drinks bottles, following prestigious predecessors such as Matthew Williamson, Roberto Cavalli and (perhaps most famously) Karl Lagerfeld. Perfecting the art of versatility, Gaultier’s collaborations include not only Hermès and Diet Coke but expand into the lingerie industry as well. In 2011, he created his first intimates collection alongside luxury label, La Perla.

Today, the Jean Paul Gaultier fashion house works solely on the couture line after the designer closed his ready to wear and menswear labels in 2014 to allow for a more concentrated effort in this area. AW17’s collection took inspiration from ski culture, with sharply-shouldered silhouettes fastening at the front with statement zips, block-colour panelling mimicking traditional sporting attire and bejewelled necklines nodding to the lavish lifestyle found in the likes of Val d’Isère and Verbier.