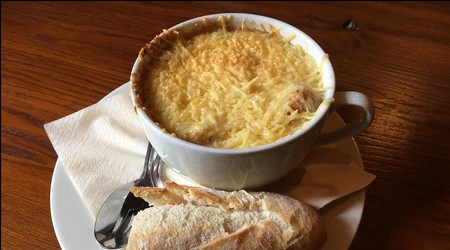 French onion soup, an incomparably delicious and heartwarming dish of minced onions and beef stock, toasted bread, and grated and grilled Comté cheese, is a national treasure. Its gastronomic roots are in the broths of Ancient Rome, prepared for the first time over 8,000 years ago. The recipe served up in restaurants across Paris – and in the kitchens of lovers of French cuisine everywhere – took shape in the 18th century.

There are two contrasting theories (or myths) concerning the creation of the modern French onion soup, both of which concern King Louis XV and his extended family. The first goes that, after a long day of hunting for deer with his court, the king returned to his lodge to find the cupboards practically bare. All that he and his great-aunt, who was staying there at the time, could find were onions, butter, and champagne. In the manner of 21st-century students around the world, they threw the lot into a pot, stirred, and served, thus, creating a new and marvelous treat.

It’s certainly possible that the nation’s favorite starter is the result of a ravenous monarch’s culinary fluke. The world has gained many wonderful foods by accident. We would never have had potato chips, for example, had George Crum, in 1853, not sought to get his own back at an aggrieved customer by chopping up supposedly soggy potatoes, frying them in grease, and dousing them with salt. Not only did the customer love them but Crum had also inadvertently discovered the world’s favorite appetite-ruining snack. (This should also answer the age-old question: Which came first, the chip or the Crum?) 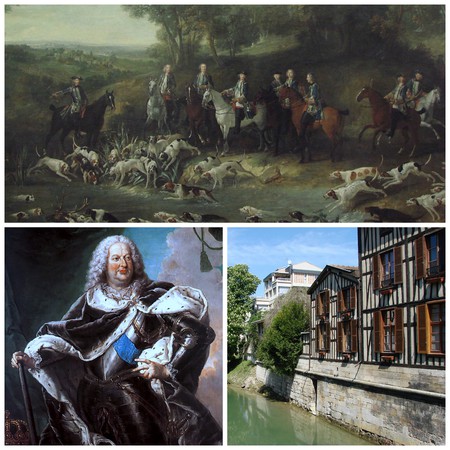 But back to the matter of 18th-century French broths. The competing legend puts the origins of onion soup in the kitchen of La Pomme d’Or in Châlons-en-Champagne. This was the hometown of Nicolas Appert, the father of food preservation and inventor of canning, who was working at the hotel one night when the Duke of Lorraine, ex-King of Poland Stanislas Leszczynski, stopped in on his way to the Palace of Versailles to visit his daughter Queen Marie, the wife of Louis XV.

The duke found the soup Appert had prepared for him so mind-blowingly delightful that he was compelled to leave his chambers in his bathrobe, descend to the kitchen, and fight through stinging tears while watching the chef dice dozens of onions and learning the exact method of preparation of his new favorite dish. Apparently, he was determined to take the recipe to the court and surprise his daughter and son-in-law with his culinary skills. In his cookbook published in 1831, Appert dedicates his recipe to the royal, naming it the onion soup à la Stanislas.

It’s not clear whether the duke ever did personally make the soup at Versailles, but the court soon fell in love with it. Aside from enjoying its hearty taste, they realized that it was also rather effective at covering the smell of a heavy night of drinking. It quickly gained the nickname ‘the soup of the drunkards,’ and to this day, it is the preferred hangover cure in many French households.

Whichever version of the story is closer to the truth, we at least have something to associate fondly with Louis XV, who is considered by historians to be one of the weakest and most ineffectual monarchs of his dynasty, a man who ‘left affairs of state to ministers while indulging in his hobbies of hunting and womanizing.’

Still, he knew a good soup when he tasted one.