The Most Unique Yoga Studios To Try In Paris

Yoga has boomed in popularity in the French capital over the past few years, and the city is now home to a plethora of studios catering to every taste and budget. Check out our list of great places to practice your downward dog in Paris.

Big Apple Yoga | Courtesy of Big Apple Yoga
Created by a New Yorker in Paris, Big Apple Yoga aims to re-create the atmosphere of a New York yoga studio in the heart of the French capital. The studio values community above all, and in addition to offering classes in a wide variety of styles of yoga, it also regularly hosts events and workshops. Big Apple is a great place for those looking to deepen their practice through their teacher training program, or try it out at a low cost with one of the program’s recent graduates who teach the reasonably priced Community Classes.
Open In Google Maps
20 Rue Dussoubs, Paris, France, 75002, France
+33142367611
Give us feedback

Yoga Studio
Facebook
Email
Twitter
Pinterest
Copy link
Share
Map View
Tucked just steps away from the busy Champs-Elysées, Paris Yoga Shala is held under a glass ceiling, allowing students to spend their Shavasanas either soaking up the sun or focusing on the serene sounds of natural rain, depending on the weather. The numerous daily classes cover all the main styles of practice, and the weekend workshops rotate through topics ranging from meditation and mindfulness to fascinating pairings of yoga and music or dance.
Open In Google Maps
9 Rue Magellan, Paris, Île-de-France, 75008, France
+33140701444
Visit Website
Give us feedback

While the price tag for many of the studios in the city can give visitors a bit of a shock, one studio has made it its mission to provide classes that will fit into even the tightest budgets. Aptly named, Affordable Yoga and Fitness has been offering classes for as little as 6€ a pop since 2013. What started out as a small MeetUp.com group has now grown into a bona fide business with over 20 teachers and multiple classes every day of the week. 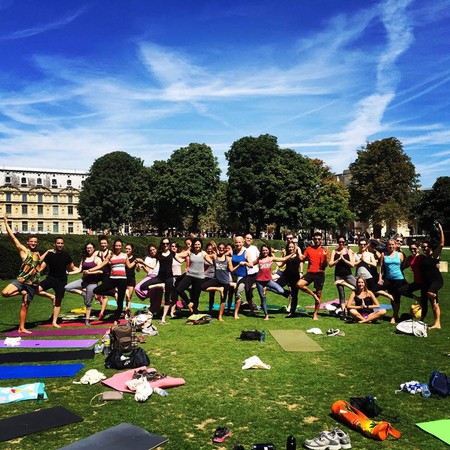 Shop, Yoga Studio
Facebook
Email
Twitter
Pinterest
Copy link
Share
Map View
Lululemon stores are more than just a place to pick up top-of-the-line workout gear. Thanks to the company’s emphasis on community engagement, many stores offer free yoga classes. The Paris outpost currently offers a free vinyasa flow session on Fridays, as well as a host of other rotating fitness classes; be sure to check out their Facebook page for a full calendar.
Open In Google Maps
15 Rue Pavée, Paris, Île-de-France, 75004, France
+33170370013
Visit Website
Give us feedback

Offering yoga and dance-based fitness courses in a few locations in Paris, the studio is run by a pair of expats who keep classes engaging and intense from beginning to end. Those looking for a few well-timed words of encouragement during a long plank, some Michael Jackson to score your flow’s crisp pace, or an inspirational mantra to focus your Shavasana will find it here. 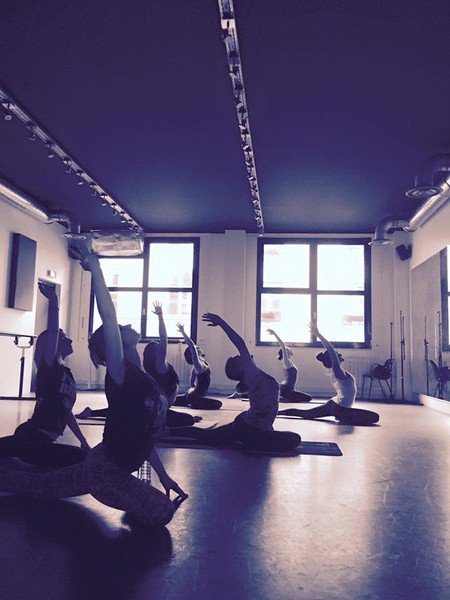 The Hot: The Yoga Factory 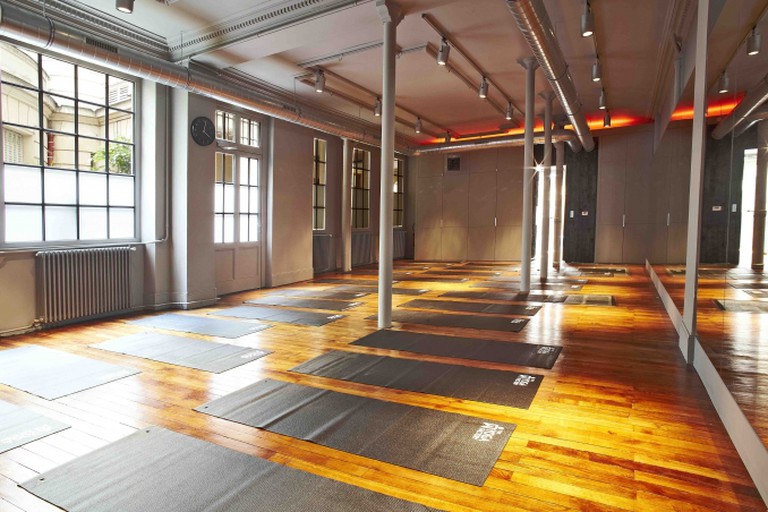 The Yoga Factory | Courtesy of The Yoga Factory
If the vigorous vinyasa classes don’t do it for you on their own, the heated studio certainly will. Kept at 28 degrees Celsius, this relatively moderate heat offers numerous benefits to enhance your practice and flexibility as well as to reduce your stress levels. The personable teachers do their best to keep you engaged and distracted from the heat as you flow from pose to pose. Afterward, catch your breath and re-acclimate in the airy, light-filled reception area as you peruse the small boutique and bookstore.
Open In Google Maps
21 Rue des Filles du Calvaire, Paris, Île-de-France, 75003, France
+33183942908
Visit Website
Give us feedback

Every class at Yoga Bikram Paris is an intense experience. Each 90-minute session covers a demanding series of poses and breathing exercises designed to stimulate and strengthen every single part of your body from head to toe – all in a sweltering 40 degrees Celsius. Between its two locations in the 4th and the 9th arrondissements, there are classes nearly every hour, including a few in English.

With two locations in southwest Paris, Le Tigre is one of the city’s most popular studios. Each location offers over ten classes a day in a wide range of styles from quick-paced vinyasa flow to slow, pensive yin. They also target a wide range of clients, including the littlest yogis and yoginis of ‘Le Mini Tigre Yoga Club,’ who have their own jam-packed schedule of events and workshops. Health and nutrition round out Le Tigre’s mission; there is a healthy snack bar at each site, and the studio’s blog frequently posts guilt-free recipes to help you fuel your practice.