8 Famous People Who Died In Paris In The 20th Century 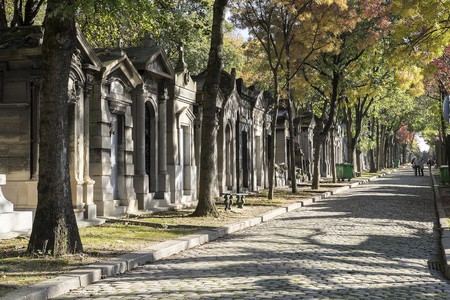 There’s no end to the list of writers, composers, socialites, intellectuals and entertainers who have come to Paris in search of inspiration. These eminent expats loved the city as we do today for its libraries, its concert halls and, above all for a good many of them, its bars. Some came and went while others chose to make it their lifelong home. Here we’ve gathered a list of celebrities who bid their final adieus from the French capital.

Ask a room what they know of Oscar Wilde and they’ll tell you as much about his private life as they do about his literary accomplishments. His most famous works are his first and only novel, The Picture of Dorian Gray, published in 1890, and The Importance of Being Earnest, a comedy of manners debuted in 1895. That same year, Wilde brought a libel case against his lover’s father, the Marquess of Queensberry, only to have it backfire and see him imprisoned for two years on a charge of ‘gross indecency’ relating to his homosexuality. On his release, exhausted emotionally, physically and financially, he fled to Paris’ Left Bank where he lived in exile until on November 30th, 1900, he died of meningitis at the age of 46. You can find out more about Wilde at the Petit Palais’ new exhibition.

Richard Wright’s naturalistic fiction may not have the readership it once enjoyed, but he will always be remembered as one of the key writers of the black experience in 20th century America. Success first came in 1938 with Uncle Tom’s Children, and two years later his novel Native Son became a bestseller. The story of Bigger Thomas was made into a play in 1941 and a film in 1945, with Wright playing the title role. The autobiographical novel Black Boy, an account of growing up in Mississippi and its endemic poverty and racial violence, was released the same year. Forever at odds with American capitalist society, Wright moved permanently to Paris in 1946. He died on November 28th, 1960, after suffering a heart attack.

Père Lachaise, among Paris’ more morbid attractions, is filled with the graves and monuments of the notable dead. Of them all, Jim Morrison’s attracts the steadiest stream of pilgrims, captivated as they still are by his rock-and-roll lifestyle. The infamous frontman of The Doors came to Paris in the spring of 1971 to escape fame and prosecution for public indecency and to concentrate on his poetry. The official story is that on July 3rd he died of heart failure in the bathtub of his rented Marais apartment, but conspiracy theorists insist he died of a heroin overdose in a nearby bar and his body was moved as part of a cover-up. Either way, his death immortalized him as one of the founding members of the 27 Club.

From an impoverished upbringing in St. Louis, Missouri, Josephine Baker rose to become one of the highest paid performers in Europe during the Roaring Twenties, with France especially enthralled by her dancing and onscreen charisma. During the Second World War, she fought alongside the French Resistance, and through the 1950s and 60s she was at the forefront of the Civil Rights Movement. In April 1975, she celebrated the 50th anniversary of her Parisian debut with a show attended by showbiz royalty at the Théâtre Bobino. Days later, she died in her sleep of a cerebral hemorrhage. A recipient of the Croix de Guerre and the Légion d’Honneur for her wartime efforts, she was the first American woman to be buried in France with military honors.

One of the most notorious American socialites of the 20th century, Wallis Simpson caused the Abdication Crisis in 1936, when King Edward VIII chose her over the throne of Great Britain and Northern Ireland. After their marriage in June 1937, the Duke and Duchess of Windsor lived a life of idle luxury, traveling between Europe and the United States, with their base a mansion in the Bois de Boulogne. Following the Duke’s death in 1972, Simpson lived out the rest of her life in their Parisian home in seclusion, her health gradually deteriorating as a result of dementia. She died in April 1986 and was buried alongside her husband near Windsor Castle.

Another novelist, playwright, and poet to trade the Emerald Isle for the City of Lights, Samuel Beckett (who, incidentally, went to the same school and university in Dublin as Oscar Wilde) first came to Paris in 1928 and settled here permanently in the late 1930s. His darkly humorous literary achievements include the novels Molloy, Malone Dies, and The Unnamable and the play Waiting for Godot. In 1969, he was awarded the Nobel Prize in absentia, so averse was he to the idea of making an acceptance speech. Lesser known is the remarkable story of Beckett’s love life. Having been stabbed by a pimp after refusing his services, the young writer met his wife while recovering in hospital. They died five months apart, she in July and he in December 1989.

A legendary femme fatale, Marlene Dietrich made film history by starring in Germany’s first talking picture, Der Blaue Engel (The Blue Angel), in 1930, which was then reshot with the same cast in English. With her choice of more masculine modes of dressing in her roles and public life, Dietrich helped to challenge popular notions of femininity. From acting, she turned to singing in the 1950s before all but retiring 20 years later. An alcoholic dependent on painkillers, Dietrich spent the last decade of her life in her apartment on the Avenue Montaigne where she died of renal failure on May 7th 1992, at the age of 90. Her funeral was held nearby at La Madeleine and she was laid to rest in her native Berlin.

Cathedral
Facebook
Email
Twitter
Pinterest
Copy link
Share
Map View
Princess Diana’s wedding at St. Paul’s Cathedral and funeral at Westminster Abbey are two events seared into the memories of people everywhere. As we all know, Lady Diana Spencer married Prince Charles on July 29th, 1981, and together they had two sons, Princes William and Harry, before their acrimonious split in 1992 and divorce in 1996. Diana was known for her charity work in support of children and the elimination of landmines. Whilst holidaying in Paris, she and her boyfriend Dodi Fayed were killed in a car crash in the Pont de l’Alma tunnel, the result of reckless driving by a pursuing mob of paparazzi and their intoxicated driver. Ironically, Princess Diana’s legacy to the traditionally reticent royal family has been its humanization in recent years, brought about by her own personability and outspokenness which once so displeased it.
Open In Google Maps
Paris, France
Give us feedback
Give us feedback