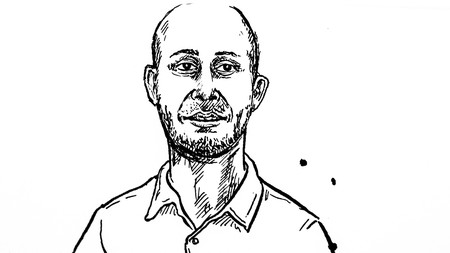 As part of our “20 Literary Translators Under 40” series, we interviewed French language and African francophone literary translator Jeffrey Zuckerman.

Read: “A Man’s Secrets” a short story by Hervé Guibert.

What are you currently translating?
I’m hard at work on Thomas Clerc’s Intérieur, a 400-page voyage around the seven rooms of the author’s apartment in Paris. In a normal writer’s hands, I’d quickly grow bored of such a conceit, but this has been an absolute joy, and a treasure trove of puns to play with. Some of my other projects recent or current include translating Hervé Guibert and various essays by the Finnish composer Kaija Saariaho for Music & Literature no. 5.

What approach or procedures do you take when translating?
That of unhealthy monomania: when I’m deep in a book, I forget everything else—sometimes even to drink water and eat food. This is not always advisable, especially for extended periods, but it makes for a heck of a story after.

What kinds of works or regions do you gravitate toward?
Books with smart, sharp writing; just enough innovation to remind readers that there are other worlds and modes of thought beyond their own; and stories from every part of la francophonie, from the perfectly preserved façades of central Paris to the wildest shores of Mauritius off the African coast.

Who or what are some untranslated writers or works that you would like to see in English? Why?
French is by far one of the most frequently translated languages, so all the essentials are already there. But sometimes there are works from the periphery that arrive as a pleasant surprise—such as the Malagasy author Jean-Luc Raharimanana’s Nour, 1947, which breathes life into the violence of Madagascar’s past, or Marie Cosnay’s Cordelia la guerre, which interweaves King Lear’s historical grief with the contemporary uproar of immigrants flooding Europe’s coastal cities.

What are some of the more interesting literary developments happening in the language or region you translate from?
Unless we’re talking about Michel Houellebecq, there aren’t too many surprises in French–all the hubbub over “autofiction” has mostly settled down and right now it’s nice to simply go into a French bookstore and see a wealth of strong writing from all corners of the French-speaking world.

What is a recent translation challenge you faced?
It’s always the wordplay that gets me. Right now, I’m trying to come up with a pun in English half as good as “l’eau-delà”—a perfect combination of the French word for “water,” eau, and “beyond,” au-delà. I’ll figure something out, but I’m still scratching my head for the moment.