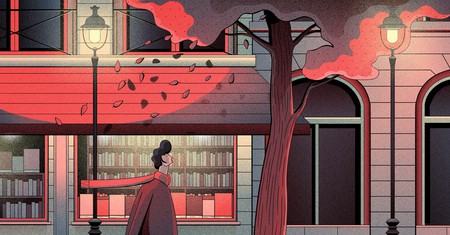 French is a romantic language that seduces the heart like no other. Its roots stretch back to the ancient Roman conquest, mixed with influences of mythology and mysterious legends. Today, the lilt of its lyrical inflections cultivate a musical tongue that seduces the listener with its unique rhythm.

The word amour (love) perfectly encapsulates the passion of the French tongue, with pronunciation requiring puckered lips. Originally amor, it also betrays the roots of this Romance language as Latin — historically spoken by the ancient Romans — following the Roman conquest of Northern Gaul in the 1st century B.C.

The word lumière (light) was first claimed by the French tongue in the 12th century. It gained new meaning during le siècle des Lumières (the Age of Enlightenment) of the 18th century, symbolising the illumination of human intellect after the ‘dark’ Middle Ages. Today, it represents the period which culminated in the French Revolution.

The word bougie (candle) came into use during the 13th century and the fairly atypical combination of letters hints at the historic links between French and Arabic culture. The city of Béjaïa in Algeria used to be called Bougie and since this was where the trade of candles took place in the Middle Ages, it provided the perfect linguistic inspiration.

The word coquille (shell) dates back to the 14th century, but has gained a wealth of meanings over time. With the advent of printing, it came to refer to a spelling error. The association arose as a tribute to the error of judgment demonstrated by people giving money to the fake beggars of La Cour des Miracles in the Middle Ages.

The word flâneur (wanderer) originated in the 16th century, gaining a set of rich associations in the 19th century thanks to Charles Baudelaire. The poet crafted a portrait of the urban explorer so memorable – leisurely wandering the wide boulevards and cafes of the capital – that no picture of Paris is complete without it.

The word sirène (mermaid) comes from Greek (seira) with linguistic roots that conjure up the image of a chain, hinting at the difficulty of detaching oneself from their grasp. This is due to the influence of Greek mythology, where Sirens are portrayed as dangerous seductresses who lured sailors to shipwreck with their enchanting songs.

The word ciel (sky) originally came from the Greek term koilos, which means ‘hollow’ or ‘concave’. This is because people used to perceive the sky as a form of cavity, otherwise known as a ‘celestial vault’. They could only observe the sky with the naked eye and so the dimensions of space largely remained a mystery, particularly regarding depth.

Most cultures around the world honour the harvest and France is no exception. The French used to refer to gain, which symbolised the season of increased production. But then, the word automne (autumn) descended from Latin in the 13th century as a linguistic homage to the deity of Autumnus, who represents the abundance of nature.

The word feuille (leaf) first came from Latin in the 13th century. While the primary meaning of the word is leaf, the French language goes hand in hand with the culinary world and so, it’s no surprise that chefs have claimed this word for semantic inspiration. Today in France, you’ll taste many tartes that use this word, for example, mille-feuilles.

The word printemps (spring) descends from the Latin primus tempus (first time). It’s one of the most ancient words to have risen from the Roman conquest of Northern Gaul. But in the 13th century, the term used an entirely different spelling. It was written ‘printans’ using the prefix ‘prin’, which back then, meant the beginning.

The word glaçage refers to glazing (or icing) and proves that gastronomic elegance is reflected in the way that descriptions gloriously roll from the tongue. The word also points to how drastically the French language was upturned with the arrival of the first printing press, with the cedilla (ç) introduced in 1530 to eliminate redundant consonants.